In an exclusive interview with Outlook, Chhattisgarh CM Bhupesh Baghel talks about the challenges and achievements of his government after completing three years in office.

Bhupesh Baghel completed three years in office as chief minister recently. Under his stewardship, Chhattisgarh has emerged as a model state, with achievements in over two dozen sectors, and recognised and awarded at the national level over these years. In an interview with Ashutosh Sharma, the chief minister spoke about the Chhattisgarh model of development, explaining how his government has been working on Mahatma Gandhi’s idea of Gram Swaraj.

What have been your focus areas as chief minister?

Our government has been working to improve the economic status of farmers and tribals. Education, health and employment generation have also been our priorities.

Chhattisgarh is the only state that has been giving the highest minimum support price (MSP) for crops. We have been procuring 52 minor forest products through self-help groups. The rate of tendu leaf collection, for instance, has been hiked from Rs 2,500 to Rs 4,000 per standard bag.

Chhattisgarh produces cashew nuts in bulk. Due to the processing, packaging and value addition of the minor products, lakhs of people are generating additional income. Earlier, people would sell cashew nuts at the rate of Rs 50 per kg. Now they sell at Rs 300-1800 per kg. Consequently, the tribals have started earning good money.

Likewise, we have success stories about turmeric, mahua flowers and several herbal plants. Women self-help groups supported by the government have been making at least 18 types of medicines from the local herbs. In 2021, Chhattisgarh bagged 10 national awards for its performance in procurement, processing and marketing of forest produce. Additionally, under the Forest Rights Act, we have started distributing entitlements of 19 lakh hectares to the tribal population.

Of late, several women self-help groups from your state have made headlines for their inspirational success stories. What is the idea behind all the government initiatives aimed at the economic empowerment of women?

A country can’t progress without the economic participation of half of its population. That's why we have introduced several economic welfare schemes for women. If women are economically empowered only then her home and family, society and the country will ultimately get empowered.

Your government has created a record of sorts in paddy procurement. How was this feat achieved?

Chhattisgarh is called a rice bowl. Earlier, paddy was procured only at the MSP. But our government started procuring paddy from farmers at Rs 2,500 per quintal. The Centre created some hurdles, but we launched the Rajiv Gandhi Kisan Nyay Yojana (in 2020). Under this scheme, we have transferred an amount of Rs 5,700 crores to farmers’ accounts within one year. We are paying Rs 9,000 per acre. But from 2022 onwards we will pay the farmers for the entire crop.

Also, we are making similar arrangements for the purchase of millets in the tribal-dominated areas, something being done by a state for the first time. Our government has been encouraging farmers for crop diversification. We have incentivised forest plantation and introduced cash crops. We are also promoting dairy, poultry and fisheries sectors.

The state has been procuring cow dung from cattle-rearers. What is it doing with it?

Just like Uttar Pradesh, Chhattisgarh was also struggling with the problem of stray cattle. Our government set up nearly 8000 gauthans (cow shelters) and started procuring cow dung at Rs 2 per kilogram under the Gaudhan Nyay Yojana. In the past year, we have purchased 54 lakh quintals of cow dung. And to date, we have disbursed Rs 116 crores for the procurement.

The cow dung is turned into vermicompost and organic manure. We have sold at least 14 lakh quintal vermicompost manure to the farmers so far. This has reduced the dependence on chemical fertilizers as well. The cow dung is also being used to prepare other useful items such as diyas (lamps), flower vases and idols among other things. At least 70,000 women are associated with this initiative towards inclusive growth.

Now we are going to generate electricity from cow dung. This experiment has been successfully conducted at three gauthans at Raipur, Durg and Bemetara.

We experimented with the help of local jugaad and demonstrated that power can be generated from cow dung. To generate electricity on a bigger scale, we have approached the Bhabha Atomic Research Centre and some other firms in Germany for providing us with the required technology. Besides this, we are also planning to manufacture organic paint from cow dung.

Non-BJP states complain that the Centre discriminates against them on disbursement of the funds. What has been your experience?

The Centre owes Rs 13,000 crore to Chhattisgarh as far as disbursement and compensation under several central taxes are concerned. It has completely withheld these payments for the past three years. Similarly, the Centre has to pay over Rs 4,000 crore as coal compensation as per directions of the Supreme Court. In fact, the Centre has been pushing us to take loans in lieu of the Goods and Services Tax compensation. It was supposed to extend financial assistance in the wake of the pandemic but it has been saddling the states with debt. This must have been happening with the BJP-ruled states as well. But they can’t speak out. 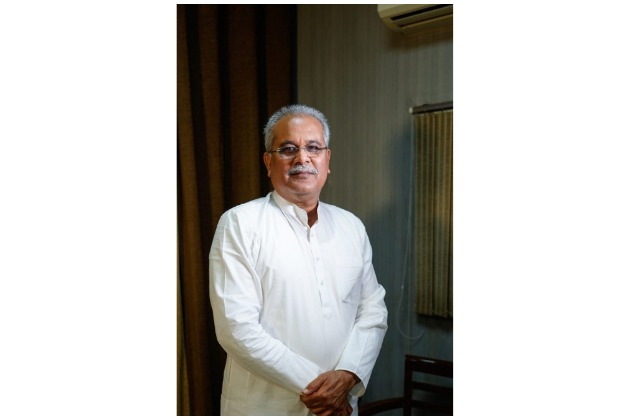 What exactly is the Chhattisgarh model of economic development?

Seven years ago, the Gujarat model was the talk of the town. This model helped the rich get richer whereas the poor become poorer. Uttar Pradesh has been following this path. The Chhattisgarh model is inspired by Mahatma Gandhi’s idea of Gram Swaraj. We have been consistently working for the economic emancipation of the labourers, farmers and the destitute. This is the reason that there is raunak in cities and towns. Different economic sectors such as textile, automobile, gems-jewellery and real estate have been witnessing growth.

Both Uttar Pradesh and Chhattisgarh are agriculture-based economies. The economies in both states can’t be strengthened without the economic empowerment of the farmers— who happen to be the biggest consumers. If farmers don’t have the buying capacity how will the traders and businessmen make profits?

We have put money in the pocket of 22 lakh farmers and 13 lakh forest dwellers, besides 10 lakh daily wage-earning labourers.

Our government has brought the Rajiv Gandhi Grameen Bhumiheen Krishi Mazdoor Nyay Yojana, under which financial assistance of Rs 6,000 per year is given to the landless poor families.

Trinamool chief Mamata Banerjee has suggested a non-Congress alternative to the Modi-led BJP. Your views?

Mamata Banerjee has been a Congress leader before she founded TMC. She has forged political alliances, both with Congress and the BJP in the past. In Bengal, she gave political space to the BJP. One can’t deny the fact that, unlike other opposition parties, you will find booth-level Congress workers in every corner of the country. At the national level, opposition parties can’t talk of an anti-BJP front without Congress.

NEWSFLASH: ULFA (I) Abstains From Calling Bandh On R-Day Amid Covid-19