Though advocate Rajeev Dhavan tries to hide his face with paper, as soon as he removes the 'shield', he is seen taking a drag from hookah. 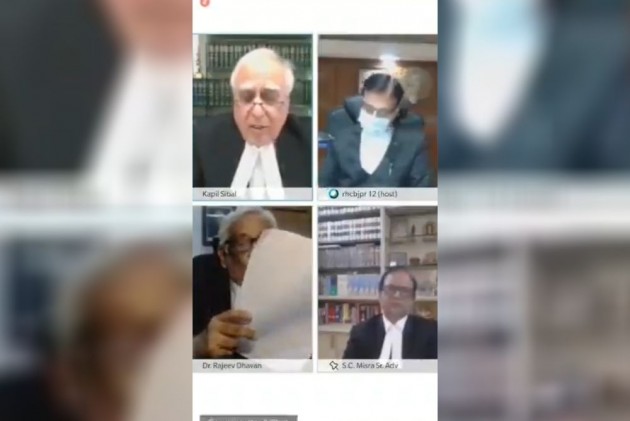 During a virtual hearing of the Rajasthan High Court, senior advocate Rajeev Dhavan was caught on camera smoking hookah. Though he tried to hide his face with paper as he took drags from hookah, the smoke-filled screen gave it away easily.

According to multiple media reports, the incident took place on Wednesday when Rajasthan High Court was hearing the petitions filed by BJP MLA Madan Dilawar and the BSP challenging the merger of six MLAs with the Congress.

There is no smoke without fire: #Rajasthan High Court hearing on disqualification of the 6 BSP MLAs who later merged with #Congress.

That's Sr Adv Rajeev Dhavan, using a hookah. He is also the lawyer for adv Prashant Bhushan in the latter's contempt case. pic.twitter.com/iF0FmeUuaV

In the video clip that is being widely shared on social media shows senior advocate and Congress leader Kapil Sibal arguing while Dhavan puffs on his hookah, filling the screen with smoke.

There are no reports yet on whether any action has been taken by the Rajasthan High Court in this matter.

The virtual hearings were necessitated after courts were locked due to the Coronavirus pandemic. In June, a lawyer was lying on his bed, donning a T-shirt during the virtual hearing. Taking a strong note of the incident, the Supreme Court had observed that lawyers should be presentable during video-conferencing and “avoid showing images which are not appropriate.”