Tamil Nadu Deputy CM O. Panneerselvam's son O.P Jayapradeep personally marched the cow to the Palamedu temple and gifted it to the temple on one condition – it should not be separated from the bull under any circumstance. 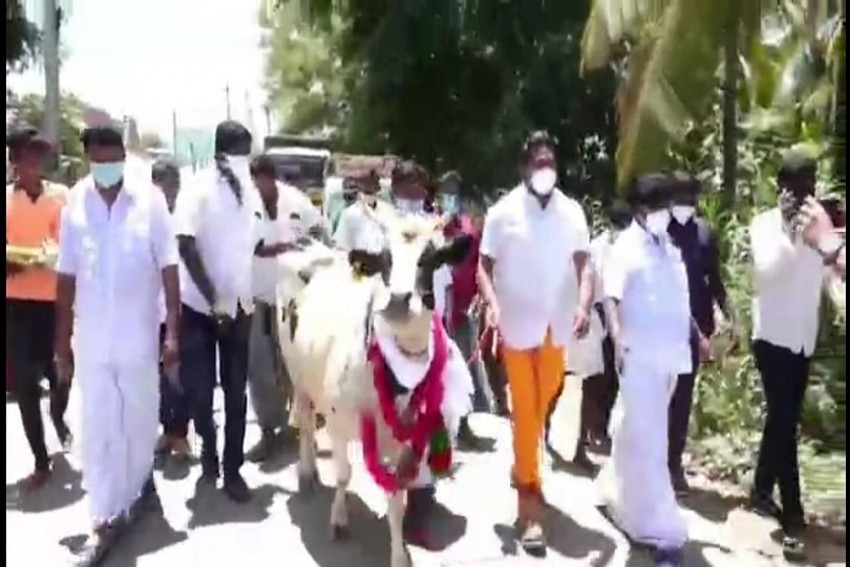 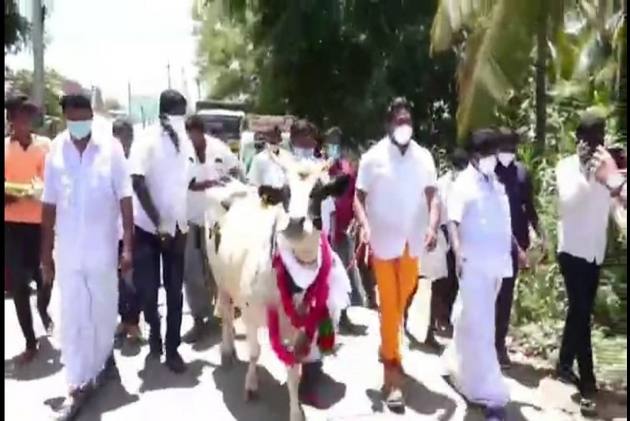 A bullish persistence can overcome separation caused by corona – a temple bull in a small Tamil Nadu village known for jallikattu has proved. Thanks to this attitude, the bull got reunited with its friendly neighbourhood cow after intervention from the highest level: the son of the state’s Deputy Chief Minister.

The fairy tale-like story unfolded this way: Muniyandi, a villager at Palamedu village in Madurai district, owned a cow. Due to financial stress caused by the lockdown, he decided to sell his cow to another farmer from the nearby town of Vadipatti. On Sunday, the buyer came to Palamedu and took away the cow in a mini truck. What should have been an uneventful drive soon developed into an emotional drama as the seller and buyer had not taken into account the bull that belonged to the Manjamalai Temple near Muniyandi’s house.

The temple bull used to be a regular visitor at Muniyandi’s house and had befriended the cow. Since it was a temple bull, Muniyandi had also fed and watered it along with his cow; thus, unwittingly nurturing their bond.

So when the temple bull saw the cow being transported on Sunday, it blocked the movement of the mini-truck, refusing the cow to be taken away. After more than half an hour of road block by the bull, the driver of the truck finally managed to evade the beefy obstacle and started to drive towards Vadipatti. But the distraught bull would not give up. It ran behind the truck mooing loudly, its call reciprocated by the hapless cow as well. Finally as the truck sped away, a tired and panting bull sat down on the road.

A few villagers managed to capture this incident on their phones and uploaded the video on social media, which led to the princely intervention. After watching the video of this incident, O.P. Jayapradeep, son of Deputy Chief Minister O. Panneerselvam, immediately got in touch with his party functionary in Vadipatti town and tracked down the buyer of the cow. He offered to buy the cow from him and had it transported back to Palamedu.

Jayapradeep then personally marched the cow to the Palamedu temple and gifted it to the temple on one condition – it should not be separated from the bull under any circumstance. He also promised to send money for the upkeep of the bovine buddies.