'We do not support Triple Talaq bill..it will create distrust among a particular community," JD(U) leader Rajiv Ranjan Singh said. 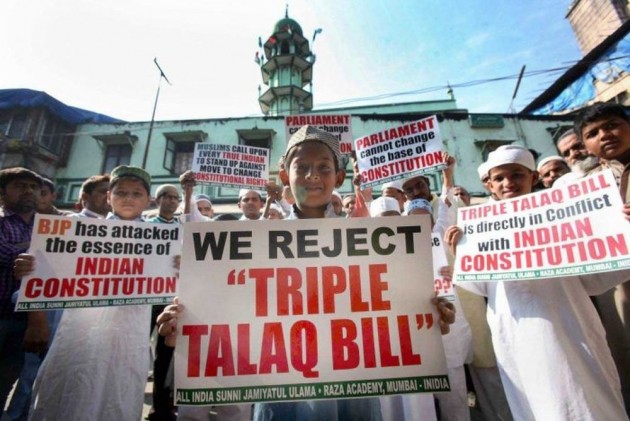 BJP ally Janata Dal (United) Thursday opposed the Triple Talaq bill and walked out of the Lok Sabha, saying it will create distrust among a particular community.

"We do not support this bill as our party believes that if this bill is passed, it will create distrust among a particular community," JD(U) leader Rajiv Ranjan Singh said during the debate on the bill.

"Nobody wants to see a husband and wife getting separated, but if such a situation occurs, a couple takes the decision after due consent and trust. You cannot take decisions on their behalf by imposing such a law," Singh added.

Singh said the government should do all that is necessary to create "awareness among the people of this community".

"That society also has its own customs," Singh said adding the government has taken this "historic" step to put an end to their customs.

Citing the example of government's Swachh Bharat Abhiyan, Singh said no law should be made in haste.

Several laws made earlier were misused, Singh said adding "if the law is made like this it would be misued."

"We boycott the bill," he said and walked out of the proceedings of the House.

Union Law Minister Ravi Shakar Prasad earlier moved the controversial Triple Talaq Bill in the Lok Sabha, saying the law is a must for gender equality and justice, adding some were still practising it despite Supreme Court striking it down in 2017.

Under the Muslim Women (Protection of Rights on Marriage) Bill, 2019, divorcing through instant triple talaq will be illegal, void and would attract a jail term of three years for the husband.

Prasad said that to allay fears of the proposed law being misused, the government has included certain safeguards in it such as adding a provision of bail for the accused before trial.

While the bill makes triple talaq a "non-bailable" offence, an accused can approach a magistrate even before trial to seek bail.

In a non-bailable offence, bail cannot be granted by police at the police station itself.

A provision has been added to allow the magistrate to grant bail "after hearing the wife", the minister said.