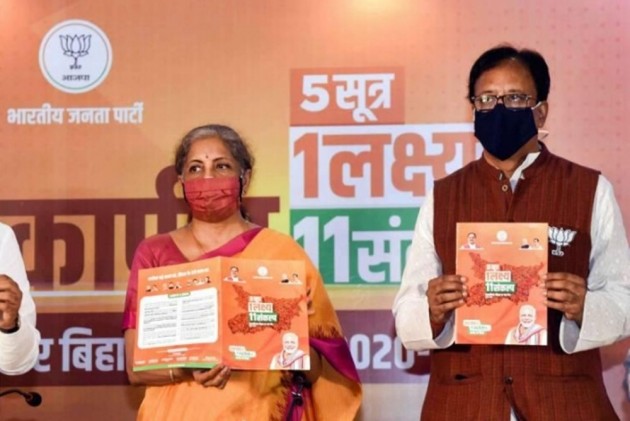 Union Finance Minister Nirmala Sitharaman on Thursday released the BJPs manifesto for the Bihar assembly polls in which the party has promised free Covid-19 vaccine once the vaccine is made available. The party also sought to reach out to the youth with the promise of 19 lakh jobs in the next five years and assured farmers of including lentils under the minimum support price (MSP) scheme.

"The NDA government in Bihar has set an example before the country in the fight against corona. It's our resolve that once the vaccine against the coronavirus has been cleared by the Indian Council of Medical Research (ICMR), we will make it available to the people of Bihar free of cost," the manifesto stated. The promise figured at the top of the BJP's election document.

Carrying the tagline “BJP hai to bharosa hai,” the party drew heavily upon the trust enjoyed by Prime Minister Narendra Modi among the masses by virtue of pro-people measures like the Jan Dhan scheme and the Ujjwala Yojana. "Bihar is a politically sensitive state. Here people cannot be fobbed off with empty promises. Claims made by parties are likely to be weighed against their past track record. This is where the BJP scores," Sitharaman said during a press conference when she released the manifesto earlier today.

"We have the confidence that we can deliver on our promises. In the last six years, all the programmes announced by the prime minister have been implemented, be it electrification of villages, gas cylinders for poor women or financial inclusion of all citizens by getting accounts opened in their name in banks," the finance minister asserted.

Speaking about the coronavirus vaccine, Sitharaman said India has reached a point where it is on the verge of producing three vaccines which are currently under different stages of trial. "When we reach the stage where scientists give clearance for large-scale production of the vaccine, we will make it available to the people of Bihar free of cost," she said.

Another key promise mentioned in the party's manifesto, includes the recruitment of three lakh teachers in primary, secondary and higher educational institutions. The party also proposed to develop the state, which has so far remained largely untouched by the boom in information technology, into an IT hub with the BJP promising to create five lakh jobs in the sector. The manifesto also stated that a large number of people will be provided employment in the health sector which is in for a major facelift through projects like the AIIMS at Darbhanga.

Other attractive promises include self-reliance for one crore women through micro finance, pucca houses for 30 lakh people, and a boost to fisheries with an aim to make Bihar number one in the sector. It also promised a fresh impetus to the dairy sector by promising to set up 15 milk processing units. A boost to production of maize, fruits, vegetables, betel leaves, honey and makhana etc, has also been promised, and to facilitate these a conglomerate of 1,000 farm producer organisations has been proposed.

Yet another promise made in the manifesto which is likely to find resonance among students is introducing Hindi as a medium of instruction for medical, engineering and other technical courses.

"Our promises are backed by credibility. Compare the situation in Bihar between 1990 and 2005 (when the RJD was in power) with the changes that occurred after we took over. You will get a clear picture," Sitharaman said. "During the NDA rule, the state's growth rate in the industrial sector has been 17 per cent. In contrast, we are unable to find the figures for the preceding 15 years, apparently because industries were never on the radar of the previous government," she added.