The police registered a criminal case against her on charges of insulting religious beliefs. 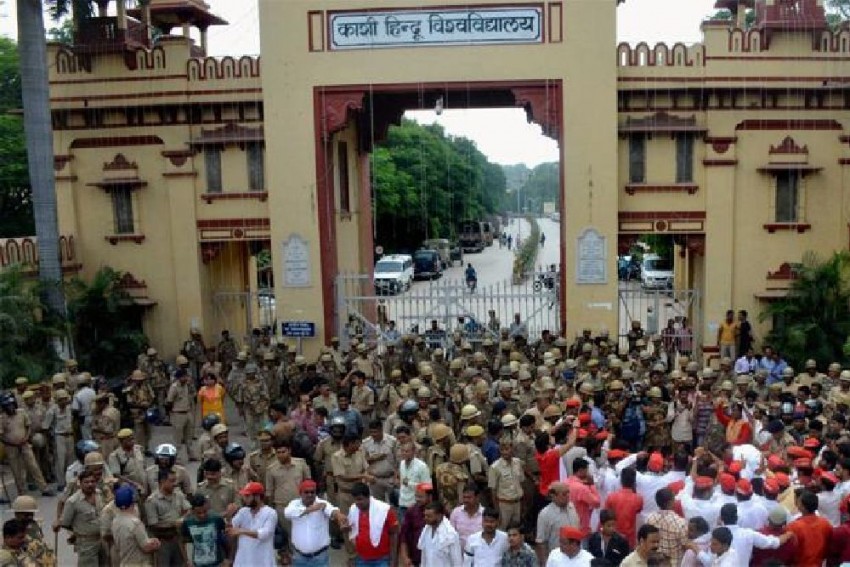 The police are probing the incident that led to the clashes at the BHU campus.
PTI Photo
Outlook Web Bureau 2019-11-15T10:32:45+05:30 Banaras Hindu University Official Booked, Forced To Quit For Removing RSS Flag 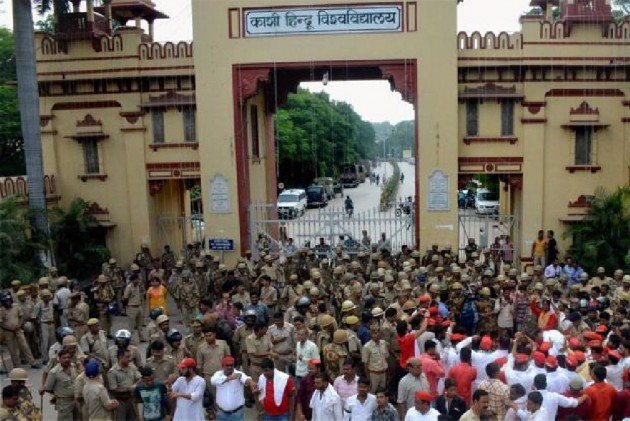 An official of the Banaras Hindu College in Mirzapur was forced to quit and a criminal case registered against her for removing an RSS flag on the campus.

Deputy Chief Proctor, Kiran Damle, removed the RSS flag from a playground on the campus while students affiliated to the RSS were holding a gathering on Tuesday morning, NDTV reported. Damle said she did let the RSS flag to be hoisted on the campus at "such a sensitive time".

"I asked the shakha members to remove the flag themselves, but they paid no attention. So I picked up the flag and gave it to my peon. When they came after me, I told them that they couldn't hoist the flag at such a sensitive time. When they insisted, I said I would not allow it inside the stadium," NDTV quoted her as saying.

Following the removal of the flag, students affiliated to the RSS staged a protest against Damle, saying she had hurt their religious sentiments. As a result, Damle was forced to quit. The protesters also accused Damle of misbehaving with students.

The Rashtriya Swayamsevak Sangh (RSS) is the ideological mentor of the ruling BJP.

The troubles for Damle further mounted when the local RSS unit filed a complaint against her. The police registered a criminal case against her on charges of insulting religious beliefs.

"We were in the shakha since 6 am, doing pranayam and yoga. Damleji came and insulted the flag. She said no shakha would be permitted here because 'we don't favour any community here,'" Sanskar, a student at the university, was quoted as saying.

Damle expressed shock over the charges levelled against her, saying she was only "following rules of the institution."

According to the reports, the varsity is in talks with the RSS leaders in Mirzapur to resolve the issue.

The issue has taken a political turn now, with BJP leaders taking a stand against Damle.

Ratnakar Mishra, a BJP MLA who visited the campus during the protests, said the RSS has been holding shakhas (gatherings) in the campus for several years now.

"It was the last wish of (BHU founder) Madan Mohan Malviyaji that any institution started by him should have shakhas," Mishra said.

Mishra even said the removal of the flag was an insult to Madan Mohan Malviya's memory.

The Congress has also jumped into the controversy, and hit out at the RSS.

"RSS shakhas should not be held on the campus of educational institutions. In any case, why are outsiders -- including RSS office-bearers -- interfering in the affairs of the university," NDTV quoted former Congress MLA Lalitesh Pati Tripathi as saying.