Speculation is rife that the Congress might field Manish Khanduri from Pauri, a Lok Sabha seat held by his father. 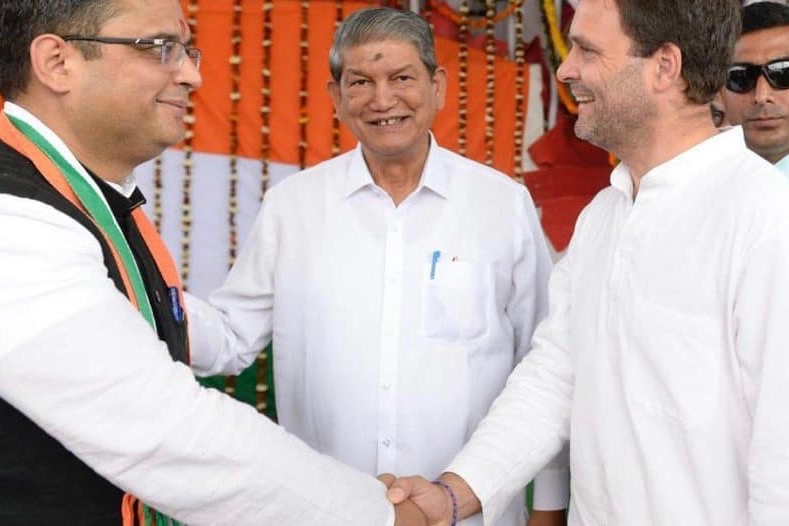 Manish Khanduri, the son of former Uttarakhand Chief Minister B.C. Khanduri, on Saturday joined the Congress in the presence of party president Rahul Gandhi at an election rally in Dehradun.

Welcoming the younger Khanduri, Gandhi claimed that his father, also a retired Army General, was shunted out as the chairman of the defence committee just because he had raised a valid question on national security.

"B.C. Khanduri is a true son of the soil. I want to tell you that he was shunted out of the defence committee just because he had raised a question on national security," Gandhi said at the Parade Grounds rally.

"Despite dedicating his life to the army, the patriot was unceremoniously removed from the panel as he voiced his concern about the country's defence preparedness," the Gandhi scion added

Gandhi also garlanded Manish Khanduri to formally induct him into the party.

Speculation is rife that the Congress might field Manish Khanduri from Pauri, a Lok Sabha seat held by his father.

Ex-Uttarakhand CM&BJP leader BC Khanduri on his son Manish joins Congress: He's an educated young man. He'll go wherever he wants. I fail to understand why questions are being raised. It's not that he has to follow me everywhere. I contributed to BJP, not him. He was never in BJP pic.twitter.com/8t0yh65dRI

The former Uttarakhand chief minister B C Khanduri was removed last year as chairman of the parliamentary standing committee on defence.

The Congress has latched on to the removal of the former army general from the committee to attack the BJP.