Congress leaders who have worked closely with Sonia and Rahul, particularly over the past five months, say that the Wayanad MP is 'definitely more involved in matters of the organization' than he was in the months following his resignation. 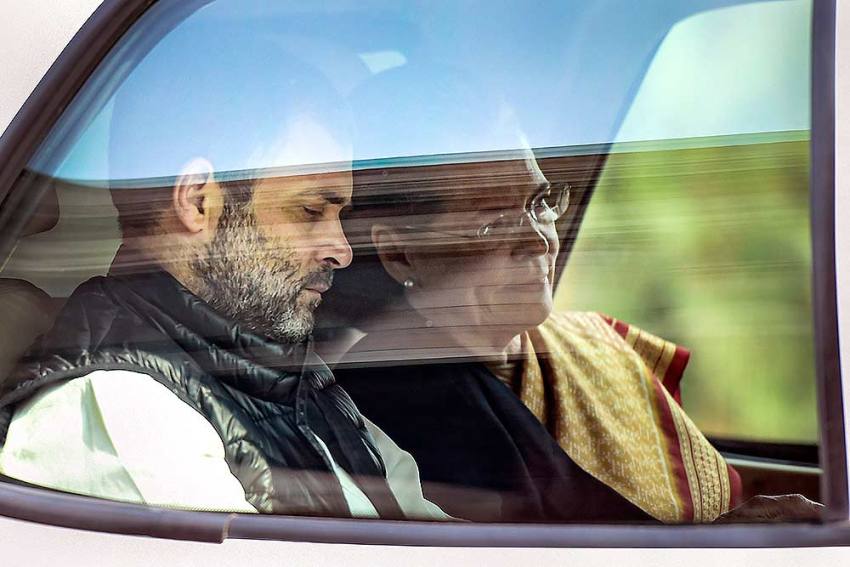 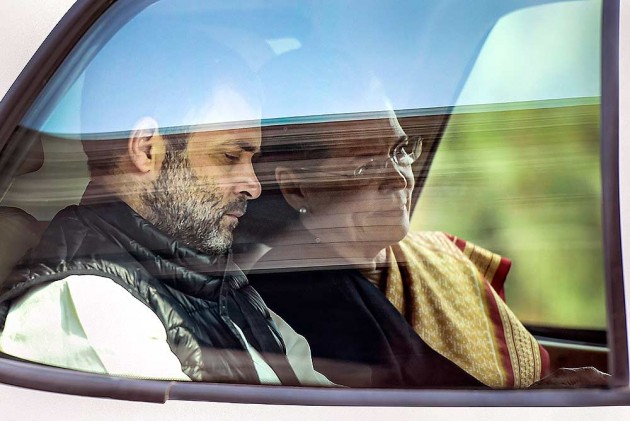 Expected as it was, Sonia Gandhi will continue a while longer as the interim Congress president, despite a growing clamour within her party to either bring back her son Rahul Gandhi at the helm or find a full-time chief through an internal party election. Sonia had been appointed interim chief by the Congress Working Committee (CWC) on August 10 last year after Rahul stepped down following an 18-month presidential stint taking responsibility for the Grand Old Party’s second consecutive rout in the Lok Sabha polls.

On Sunday, Congress spokesperson Abhishek Manu Singhvi said during a media briefing that Sonia will continue as the interim party chief but added that her successor will be chosen by the party “in the not too distant future”. Meanwhile, the party’s Lok Sabha MP from Thiruvananthapuram, Shashi Tharoor, reiterated in an interview to a news agency that the “Congress needs to expedite process of finding full-term president to arrest perception of being rudderless and adrift”. Tharoor added that it was “unfair” to expect Sonia “to carry this burden indefinitely” and though he believed that Rahul has the “mettle, capability and aptitude to once again lead the party”, the party must elect a new chief if the Wayanad MP remained steadfast on his earlier assertion of the Congress’ need to find a non-Gandhi president.

Congress leaders, who have worked closely with Sonia and Rahul, particularly over the past five months, say that the Wayanad MP is “definitely more involved in matters of the organization” than he was in the months following his resignation. Since February, Rahul has been leading his party’s charge against the Narendra Modi government on various fronts, including its handling of the Covid pandemic, the economic impact of the lockdown and the Chinese incursions into Indian territory in Ladakh’s Galwan Valley. However, the Nehru-Gandhi scion who turned 50 years old in June, has given no clear indication yet on whether or not he has decided to withdraw his resignation as Congress president, a post to which he was elected to for a term of five years in December 2017.

It is primarily due to this uncertainty over Rahul’s return – or the appointment of a non-Gandhi – as Congress president that demands for a full-term party chief to arrest the organizational and political drift are regularly made. The past five months have witnessed a key state, Madhya Pradesh, slipping away from the Congress party’s grip while the longevity of its government in Rajasthan is likely to be decided next week after the state Assembly convenes on August 14, over a month after Sachin Pilot and 18 party legislators rebelled against chief minister Ashok Gehlot. The high profile defection of Jyotiraditya Scindia – the guy who could walk into Rahul’s house anytime – to the BJP and the imminent departure of Pilot, another dynast and confidante of the Nehru-Gandhis have been seen as validation of the Congress party’s inability to set its house in order despite recurring electoral and organizational setbacks.

The unresolved leadership question aside, there have also been demands from within the party by leaders like Anantpur Sahib MP Manish Tewari for the Congress to present to the people a cogent ideology, which among sundry other issues, clearly spells out the party’s view on its economic philosophy, nationalism and secularism. From the ideological prism, the Congress party’s biggest challenge remains the struggles with defining its position on secularism and nationalism – the latter has been turned into a formidable electoral weapon by the BJP while the former has been reduced to a cuss word by the Hindu right which variously calls it a western concept or one that essentially means Muslim appeasement. In recent years, with an electorally ascendant BJP, the Congress has tried in vain to explain to the predominantly Hindu electorate that its advocacy of secularism is not about preferential treatment to other religious minorities but for communal harmony and equal respect for all religions.

The challenge in doing so doesn’t emanate only from the relentless BJP campaign for bolstering the supremacy of one religion. The nervousness within the Congress, particularly the younger lot of ambitious leaders, in strongly opposing the Citizenship Amendment Act or the abrogation of Article 370 ran counter to the tough stand that Sonia, Rahul and Priyanka Gandhi Vadra proposed to take against the controversial decisions. The contradictory voices from within the party gave an impression of the Congress leadership trying to straddle both ends of the narrative. It presented the damaging image of a party that is either too confused or too treacherous on issues that have far reaching consequences not just for religious minorities but for the idea of India.

This Janus-faced streak amplified manifold earlier this month when Modi performed bhoomi pujan in Ayodhya for the Ram Mandir. Instead of asking critical questions on why the Prime Minister of a secular nation was unabashedly participating in a religious ceremony at a site that has historically been a source of communal discord or why the Supreme Court’s verdict for constructing both a temple and a mosque in Ayodhya was not being implemented simultaneously or why criminal cases against BJP/RSS leaders linked to the demolition of the Babri Masjid hadn’t reached closure yet, the Congress displayed competitive appeasement of the Hindus by seeking to take credit for the construction of the temple. Kamal Nath and Digvijaya Singh claimed that the dream of former prime minister, the late Rajiv Gandhi, for seeing a Ram Mandir built in Ayodhya was finally being realized. Several party leaders joined in to claim that it was Rajiv who first got the locks at the disputed site opened for puja back in 1985 and followed it up with performing the shilanyas for the temple in November 1989. While Sonia made no comment, Rahul and Priyanka issued statements that were so carefully drafted that their message was completely lost. Rahul and Priyanka advocated that the bhoomi pujan must usher in an age of religious tolerance and that Lord Ram can never reside in a place marked by hate and violence. The statements by the Nehru-Gandhi siblings were perhaps an indictment of the politics BJP plays over Lord Ram but in reality, most people, including Muslim leaders within the Congress, were uneasy over what they saw as a clear shift of the party towards majoritarian appeasement.

The rough terrain of electoral revival has been hard for Sonia, Rahul and the Congress to navigate despite a mixed bag of some successes since the Lok Sabha disaster. In the assembly polls that have happened since the Lok Sabha elections, the Congress has managed to crawl back to power – albeit as a junior partner in an alliance – in Maharashtra and Jharkhand, both states that were decisively won by the BJP five years ago. In Haryana, though the party failed to form a government, it succeeded in giving the BJP a real scare. In UP, where Priyanka is leading the charge to revive the party in a state that has witnessed a swift and consistent shrinking of the Congress footprint since 1989 (with the exception of the 2009 Lok Sabha polls), a reality check of the efforts is still over a year away since the assembly polls are due only in 2022. Priyanka will not only have to sustain her efforts in the state but also magnify them substantially.

On the other hand, neither Sonia nor Rahul seem to have paid any attention on reviving the party in states where the Congress has been pushed out of electoral relevance. The party organization continues to be in a shambles in the northeastern states, which until just six years ago were largely BJP-mukt. In Andhra Pradesh, a Congress bastion until 2014 when the UPA government gave in to pressure for bifurcating the state and carving out Telangana, YS Jaganmohan Reddy – son of Congress stalwart late YS Rajasekhar Reddy – has reduced the Grand Old Party to a fringe entity. In Telangana, the Congress hasn’t even been able to take some credit for creating the state and continues to struggle for survival. In Odisha, West Bengal, Bihar and Tamil Nadu, the party’s plans of revival don’t even exist on paper. Of course, these are regions where the party has lost ground over a long span of time and it would be unfair to expect a turnaround in a year’s time. Yet, the absence of any credible effort to rebuild the party must make Congressmen wonder if the leadership wants the 2019 Lok Sabha score of zero seats across 13 states become a recurring reality.

Over the past five months, the Congress has begun to make some belated course correction. A slew of organizational changes are being made without much fanfare. As reported by Outlook recently, these changes have largely been at the state and district levels of the organization where new appointments are being routinely made to various posts. While the much needed revamp of the Congress at the central level – the weeding out of organizational deadwood and non-performers – is yet to take place, if changes made at the state level are an indicator, there is an interesting churn underway, even if it is going largely unnoticed. A majority of the new appointments made in the states depart from the Congress praxis of recent years as they give primacy not to lineage, linguistic flourish, elitist aura or sycophancy but to ideological commitment, grassroots struggle, organizational capabilities or even a hint of deft political tactics. The long due elevation of key troubleshooter DK Shivakumar as Karnataka Congress chief, the appointments of assiduous yet underrated leaders like Ajay Kumar ‘Lallu’ and Anil Chaudhary as party chiefs in U.P and Delhi respectively or that of Hardik Patel as working president in Gujarat and Govind Singh Dotasra in Rajasthan are a testament to this new experiment.

The Congress has also used the past year, more so the lockdown period, to overhaul its media and social media outreach with uncharacteristically aggressive spokespersons like Pawan Khera, Gourav Vallabh, Jaiveer Shergill, Ragini Nayak, Rajiv Tyagi and others countering the BJP’s narrative while the Congress social media team has been regularly launching online campaigns on specific issues like lack of jobs, rising fuel prices, national security and the deepening economic crisis.

Rahul too seems to have used the lockdown period to shed his image of a non-serious, inconsistent politician. He has been steadfast in pointing out alleged failures of the Modi government but has chosen to do so without the theatrical outbursts analogous to his Chowkidar Chor Hai diatribe during the Lok Sabha campaign. Instead, at the risk of appearing like a leader who doesn’t have all the answers, Rahul’s virtual interactions are recorded and then broadcast through the party’s social media platforms and on his personal Instagram, YouTube, Facebook and Telegram channels. The ‘in-conversation’ series has had guests such as former RBI Governor Raghuram Rajan, Nobel laureates Muhammad Yunus and Abhijit Banerjee, public health experts Prof. Ashish Jha and Prof. Johan Giesecke, industrialist Rajiv Bajaj and even a group of Indian nurses working across the world. Rahul has also begun posting short videos of him speaking on issues of national concern.

These recent developments indicate that Rahul may indeed be charting his way back to the top of his party though, as sources close to him constantly assert, he will do so “at an appropriate time and on his own terms”. Both Rahul and the Congress need to realize that waiting for an appropriate time while the BJP continues its conquest – both at the hustings or as MP, Karnataka, Goa, Arunachal Pradesh, Manipur and perhaps even Rajasthan have shown, even after the votes are cast – may not be the best strategy for revival. The Congress needs to take urgent measures to clear its mess. Rahul needs to cross the Rubicon or make way for someone who can.