‘Arrest Us’, Congress Leaders Dare Govt After Arrests In Delhi Over Posters Critical Of PM Modi 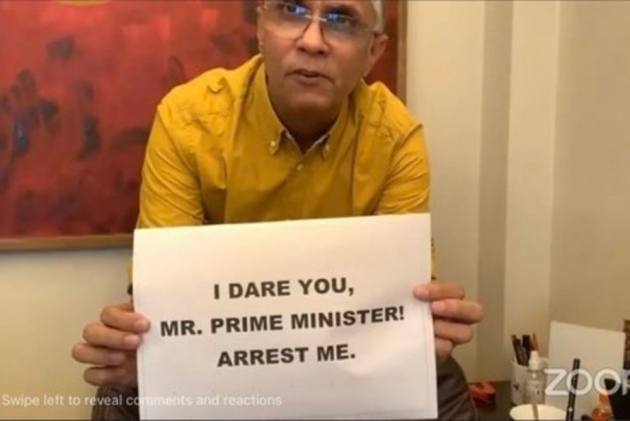 Following reports of several arrests made by Delhi Police over putting up posters critical of the prime minister, Congress leaders on Sunday slammed the police action and dared the government to arrest them for raising questions on the export of Covid vaccines.

Led by Rahul Gandhi, Congress leaders changed their profile pictures on Twitter with the poster asking why COVID vaccines were sent abroad.

"Arrest me too," said Gandhi in a tweet while sharing a picture of the poster "Modi ji, why did you send our children's vaccines abroad".

The challenge was posed after a few people were arrested by Delhi police for putting up posters in the national capital on the vaccine issue.

The Delhi Police also registered a number of FIRs and arrested people for pasting posters critical of the prime minister.

Congress leader Jairam Ramesh dared the prime minister and home minister to arrest him, saying he was putting up such posters on his compound wall.

"Putting up critical posters against PM is now a crime? Is India run by the Modi Penal Code now? Is the Delhi Police so jobless in the middle of a raging pandemic," he asked.

"I am putting up posters on my compound wall tomorrow. Come get me," Ramesh dared.

Putting up critical posters against PM is now a crime? Is India run by the Modi Penal Code now? Is the Delhi Police so jobless in the middle of a raging pandemic??

I am putting up posters on my compound wall tomorrow. Come get me.@DelhiPolice @AmitShah https://t.co/cFH8Tdh93p

Congress spokesperson Pawan Khera said at a press conference that questions will be asked from the prime minister if people don't get vaccines, medicines and oxygen they desperately need to fight COVID.

"I dare you to arrest me. Where is my vaccine, where is my oxygen? We will continue to ask you questions," he said while alleging that people are being "arrested for asking questions".

Khera said most of the deaths could have been avoided and people are dying not because of COVID, but due to the mismanagement in handling the pandemic.

He alleged that the government had created man-made shortages and there was chaos all around.

"The Government of India did not manage the crisis well," he said. The Congress leader alleged that when it came to negotiating with vaccine manufacturers or putting in place the vaccine policy, everything was "centralised and individualised".

"PM Modi wanted to be known as a vaccine guru, but now the entire world and every Indian is asking tough questions," he said.

"You can't have centralised decision-making and decentralised responsibility," he said.

"What we witnessed is image management, which is the most unfortunate aspect of this government. It is fatal for the country," he felt.

On the Centre issuing guidelines in rural areas, Khera said they have come much after the virus has already spread in villages.

"We also get to know the under-preparedness of the government, as the entire preparedness was vested with the Centre under NDMA," he said.

He said India has successfully implemented immunisation drives in the past and diseases like polio have been eradicated.

"India has achieved immunisation in the past, provided there is a political will. The political will is not there under PM Modi," he alleged.