There could be various possible reasons which one can speculate on the basis of a global flight tracker showing that the aircraft tried to land twice at the Kozhikode airport. 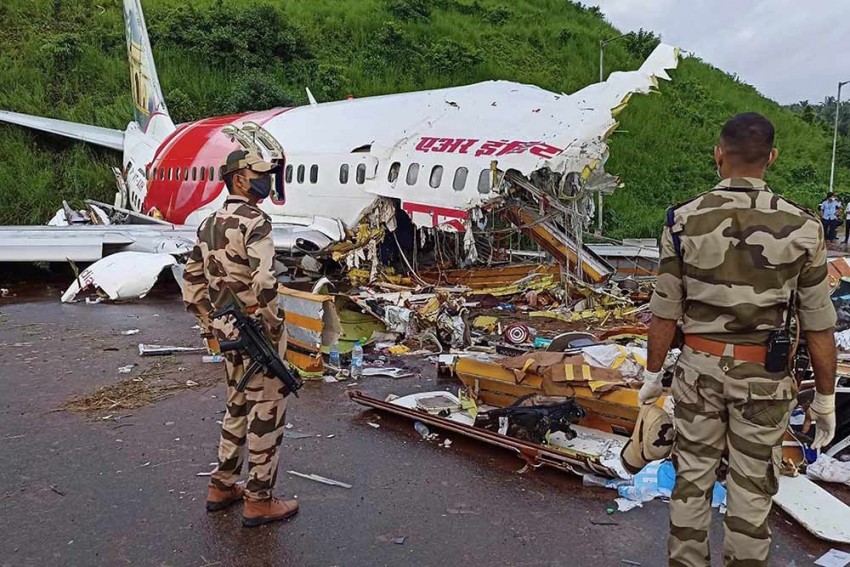 Security personnel stand guard near the mangled remains of an Air India Express flight, en route from Dubai, after it skidded off the runway while landing on Friday night, at Karippur in Kozhikode.
PTI Photo
Jeevan Prakash Sharma 2020-08-08T18:45:45+05:30 Air India Express Plane Crash: What Could Have Gone Wrong At Kozhikode Airport 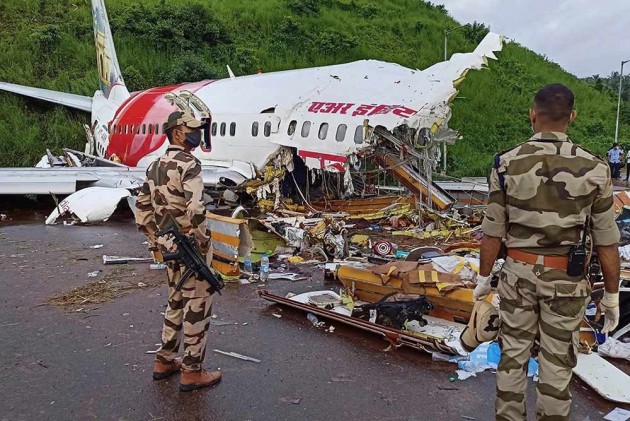 An Air India Express flight from Dubai, carrying 191 people, skidded off a tabletop runway and split into two Friday evening at Kozhikode airport in Kerala. Eighteen people, including both pilots, have been killed in the horrific accident so far.

The aircraft touched down the runway almost at the middle, continued running to the end of the runway amid heavy rain, fell down in the valley and broke down in two pieces.

The Aircraft Accident Investigation Bureau (AAIB), which has seized the Digital Flight Data Recorder (DFDR) and Cockpit Voice Recorder (CVR), will investigation to find out the actual reason for the accident.

Both, DFDR and CVR, can provide crucial information such as the conversation between the pilots in the last moment, their conversation with the ATC etc.

There could be various possible reasons which one can speculate on the basis of global flight tracker website flightradar24.com which shows that the aircraft tried to land twice at the airport. Here are a few scenarios that might have emerged leading to the crash.

Social media reports hint towards technical fault such as snag in landing gear which could have forced the pilot to abort the landing twice. Experts dismiss the scenario saying that in such a situation, a pilot gives a Mayday signal to the Air Traffic Controller (ATC) who makes necessary emergency arrangements such as ambulances and fire tenders before the landing takes place. The pilot will not land till the time these services are in place. This didn’t happen at the airport.

Speculations are rife that since the aircraft didn’t catch fire, it might be on low air turbine fuel. This could be another reason why the pilot might have decided to force-land instead of moving to an alternate destination. Experts don’t buy the logic as it again gives rise to a situation where the pilot should have given a distress signal to the ATC. Also, as per air safety norms, every aircraft carry adequate fuel so that it can fly to the nearest alternate airport in case of any crisis at the destination airport.

Though the Kozhikode airport has been reportedly saying that the visibility was 2000 metre, which was good enough for the aircraft to land, other unconfirmed reports alleged poor visibility leading to force the pilot to abort landing twice. “Even if we presume that the visibility was very low, the pilot would have flown to the other nearest airport rather than landing there. It is really intriguing to know the compelling circumstances due to which he chose to land there only. Being a senior pilot, he couldn't have made such a mistake,” a senior pilot from a private airline said.

Pilot's Over-confidence: A section of senior pilots are of the view that since the in-command Captain Deepak Sathe was a very senior pilot with an Indian Air Force background, he might be overconfident that he would make it. Also, according to Air India, he had landed at the same airport 27 times earlier.

“Sometimes, air force pilots, due to their background, are more confident to handle a difficult situation,” A pilot said. But his remark is contradicted by another pilot who said, “There is a saying among pilots that if he is alive, frame him and if he is dead, blame him. So far as I knew Captain Sathe, he had a vast experience, and he would never go wrong with his assessment. Let’s wait till the time the final report comes.”

Length of the Runway: Some experts have been quoted in media saying that the runway end safety area (RESA) was 90 metres only due to which the aircraft didn’t stop even after overshooting the runway. However, sources in the Airport Authority of India (AAI) has dismissed these allegations. “We shortened the runway from 2860 metres to 2700 metres two years ago. This has made RESA 240 metres on both sides of the runway. It is more than sufficient as per the International Civil Aviation Organisation’s norm,” a senior official from the AAI said requesting anonymity.