Farmers' Agitation Not Political, We Demand Solution To Crisis Not Change Of Power: Rakesh Tikait 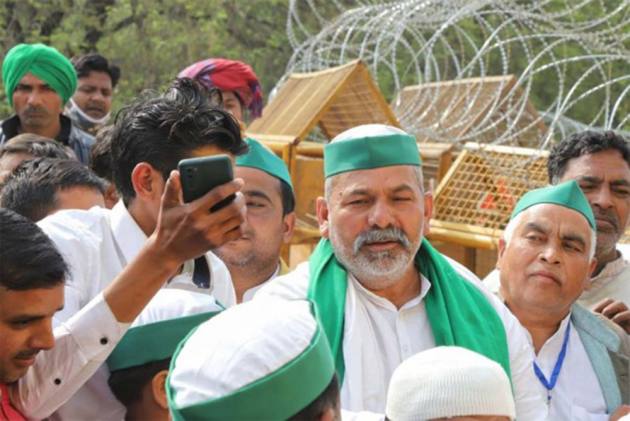 Intensifying their protests against the Centre’s new agriculture legislations, farm unions on Wednesday announced that they will tour the country to spread awareness about their movement.

Addressing a gathering of protesting farmers at the Singhu border outside the national capital, Bharatiya Kisan Union (BKU) leader Rakesh Tikait asserted that the agitating farmers were not aiming for a change of government at the Centre but that they were only demanding a solution to their problems.

"We do not aim for a change in power (at the Centre). The government should do its work. We want it to repeal the farm laws and ensure law on minimum support price (MSP)," he said.

He further said that the farmers will continue with their protests till the Centre addresses their issues.

"The government should hold the talks. Our committee is ready to talk. Solutions will be found through dialogue and the matter will be resolved,” he said.

Tikait, who had earlier said that police should have shot those who unfurled religious flags at Red Fort during the farmers’ tractor rally on Republic Day, defended the act on Wednesday saying it was not treason and youths were being “framed”.

"What sections are imposed for unfurling flags at a non-permissible place? Impose those sections, lodge the case. Kaun sa deshdroh ka kaam kar diya? (it was not an act of treason)," said the farmer leader.

He alleged the Red Fort incident was a "conspiracy" by the government to distract the agitation and lower the farmers' morale.

Tikait also asserted that the unity of the Sanyukt Kisan Morcha (SKM), an umbrella body of the farmer unions protesting the contentious farm laws, was intact and warned the government not to be under any delusion.

The agitation will expand with holding of big meetings across the country and associating 40 lakh tractors with it, he said, adding the farmer leaders will tour different states to spread the movement.

"Do not worry, we will win. The farmers in the country are watching you and the 300 km area around Delhi. We will visit each village in the country, hold big meetings and associate 40 lakh tractors with the agitation," he said.

Tikait said that the farmers agitation was meant to ensure that food grains reach the needy and not end up locked in the coffers of the corporates. The farm laws will not only destroy the peasantry, they will also wipe out small traders and the common man in the country, he claimed.

He reiterated that the agitation was completely "non-political" and will not give space to any politician to advance his or her vested interests.