Advani's Subtle Message To PM Modi, Shah: Those Opposed To BJP Are Not Anti-Nationals

BJP patriarch LK Advani in a blog post on Thursday said that the party has never regarded those who disagree with it politically as “enemies” or "anti-nationals", but only as adversaries. 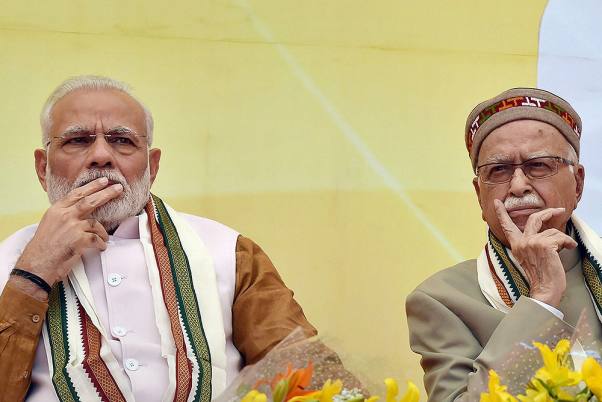 BJP patriarch LK Advani’s silence at the repeated political slights he has had to suffer from the party he co-founded ever since his protégé Narendra Modi rose to be Prime Minister has baffled political observers for the past five years. Now, on the eve of the Lok Sabha polls, the 91-year-old veteran, who was replaced by party president Amit Shah recently as the BJP candidate from Gandhinagar, has broken his studied silence and he has a subtle message for the Modi-Shah duo, who now have the reins of the BJP firmly in their hands.

In a blog, ostensibly written to mark the Foundation Day of the BJP which falls on April 6, Advani has said the occasion calls for “all of us in the BJP to look back, look ahead and look within”.

Curiously though, while Advani refrains from wishing his party success in the forthcoming Lok Sabha polls or even from mentioning Modi and Shah in the blog post, he makes not-so-veiled references to things that, in his opinion, have changed within the party he founded along with Atal Bihari Vajpayee in 1980. And it is here that the veteran has punched the hardest.

The observation, while not specifically targeted at any individual in the party, assumes significance since the rise of Modi and Shah on the country’s political landscape has coincided with an aggressive BJP that has repeatedly been criticised for dubbing its opponents as “anti-nationals”, traitors” or worse. The pointed reference to the party’s guiding principles being that political opponents are adversaries and not enemies will, in all probability, be read as a counter to Modi and Shah’s Congress-mukt Bharat slogan on which the party has assiduously worked on for the past five years.

Interestingly, while Advani makes a reference to Gandhinagar – the Lok Sabha constituency he had been elected from for six terms since 1991 – he desists from making any reference to Shah’s candidature from the seat in the forthcoming polls, leave alone urging his erstwhile voters to support the BJP president at the hustings. All Advani says about Gandhinagar is: “I take this opportunity to convey my most sincere gratitude to the people of Gandhinagar, who have elected me to the Lok Sabha six times since 1991. Their love and support has always overwhelmed me.”

Relegated to the ‘margdarshak mandal’ of the party by Modi and Shah back in 2014, the original ‘Loh Purush’ (Iron Man) of the BJP has also reminded the party that “defense of democracy and democratic traditions, both within the Party and in the larger national setting, has been the proud hallmark of the BJP.” Here again, the comment assumes significance as Modi and Shah are known to brook no dissent within the ranks. Advani’s co-traveller in the party, Yashwant Sinha, who had quit the BJP last year and other leaders like Arun Shourie and Shatrughan Sinha who parted have ways with the saffron outfit have all maintained that the party today had turned into a club of psychophants who do not question the leadership and that those who do dare to have a dissenting opinion are promptly sidelined.

“BJP has always been in the forefront of demanding protection of independence, integrity, fairness and robustness of all our democratic institutions, including the media. Electoral reforms, with special focus on transparency in political and electoral funding, which is so essential for a corruption-free polity, has been another priority for our Party,” Advani adds. The mention of political and electoral funding is interesting since the meteoric rise in the BJP’s wealth since 2014 has often been questioned by its opponents.

Advani has not missed out on asserting that the “heroic struggle against the Emergency rule was precisely to uphold” the values he has mentioned. The remark is likely to bring cheer to those in the Opposition camp who have often claimed that the country has been going through an undeclared Emergency since May 2014.

Advani ends his blog with a call for introspection. “Elections are a festival of democracy. But they are also an occasion for honest introspection by all the stakeholders in Indian democracy – political parties, mass media, authorities conducting the election process and, above all, the electorate,” he says. While he qualifies that the introspection he seeks is from all stakeholders in a democracy, it wouldn’t be surprising that BJP rivals see this as an appeal to the voters to re-think about the party they want to see in power when results for the general election are declared on May 23.

It also remains to be seen if Murli Manohar Joshi, Advani’s colleague in the BJP margdarshak mandal which the party leadership has not consulted on any critical matter ever since it was carved out, will also come out with a similar message to mark the party’s foundation day. After all, like Advani, Joshi too has been dropped from the BJP’s list of Lok Sabha candidates and has already declared to the “dear voters of Kanpur” that he was not in the electoral fray because the party did not want him to contest