A Pin-Prick Of Hope: 40 Transgenders Given Covid-19 Jab In Guwahati

Assam, the first state to launch such a drive, will vaccinate more than 500 from the community in Kamrup (Metro) district next week. 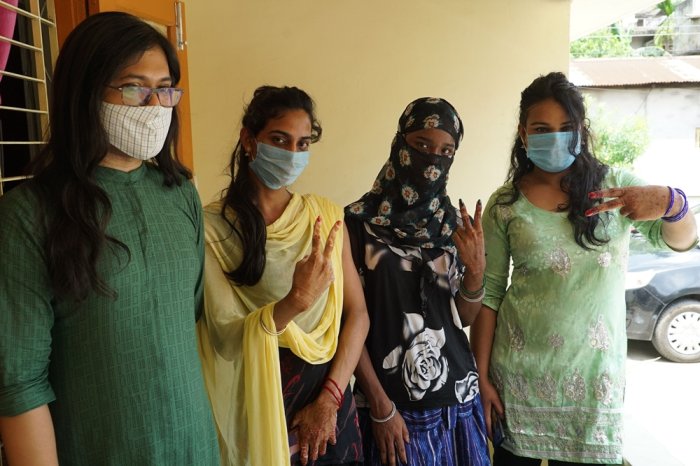 40 transgenders from Guwahati received their first dose of Covaxin at a government-run shelter home.
Surajit Sharma
Dipankar Roy 2021-05-14T18:59:39+05:30 A Pin-Prick Of Hope: 40 Transgenders Given Covid-19 Jab In Guwahati

They were more than convinced that they would not be accepted in the queues, no matter the import or urgency of the matter. So they approached the state government and it was agreed that special arrangement would be made for them.

This morning, 40 transgenders from Guwahati received their first dose of Covaxin at a government-run shelter home for them, Tritiya Niwas, here.

“They could not have gone and stood in the queues for the vaccination, our society is not yet ready to have them in their midst,” explained Swati Bidhan Baruah, founder of All Assam Transgenders Association. “There is no space for the third gender,” she said.
Baruah is also an advocate who practises in Gauhati High Court and the Supreme Court.

“As their representative, I approached the directorate of health services and they assured to help us and continue to do so till all of us are vaccinated,” Baruah said. “I explained to the officials that transgenders are a marginalised lot and would need help,” she said, adding that today’s was a pilot project.

Assam is the first state to launch vaccination programme for the community.

Next week, more than 500 from the community belonging to Kamrup (Metro) district would be vaccinated. “Thereafter, we will take it up district-wise across the state,” Baruah said.
Baruah believes such an exercise has not been conducted anywhere else in the country. “As far as I know,” Baruah said.

Baruah had moved the Bombay High Court in 2012 for permission to undergo a sex reassignment surgery because her family was opposed to it. In 2018, she was chosen as the first transgender judge in Assam to mediate in Lok Adalat cases. She is also an associate vice chairperson of the six-member Transgender Welfare Board set up by the Assam government last year.

“This is a small step and other states can learn from Assam,” Baruah said while regretting that notwithstanding judicial intervention and other measures taken, transgenders are still to find acceptance. “There is still need for extensive sensitisation for people to accept us psychologically,” she said.

She said one of them from Bongaigaon had contracted Covid-19 last year but has since recovered. “She also donated plasma later,” Baruah said.
According to the 2011 census, there were 11,374 transgenders in Assam but a recent survey by the government pegged the number at above 25,000.