On an island in the middle of the Brahmaputra river, I spotted him first aiming his gun at me. And, then, he strummed his guitar and sang a love song. I hummed along, our toes in the water.

More from Maitreyee Bhattacharjee
View All

The year was 1998. I was standing at the Sukreswar ghat at seven in the morning, facing the grey waters of the river Brahmaputra. As a student of Cotton College, Guwahati, walking along the river was a regular preoccupation for many, and I was no different. A serpentine line of buses crawled through, even while early morning devotees hastily headed towards the nearby temple. Flower stands flanked the road along the ghat, while the heady smell of Rajnigandha reached out. ‘Baideo loi jaak, phool loi jaak’ (sister, here, take some flowers), a boy called after me.
From where I stood, I could see the deep waters of the Brahmaputra swirl mid-stream. The rains had been persistent, and the water levels stood high even in December. From a distance, I could see the island of Umananda, right in the middle of the mighty river. On days like this, the island looked particularly mysterious. As always, looking at it now, I was seized by an itch to visit it. Umananda is one of the smallest riverine islands on which humans live, along with the highly endangered golden langur. Mythology has it that the Hindu God Shiva built the island for his wife Parvati as a place where she would go for pleasure. But seniors in the hostel had warned us from visiting the place. “It is eerily quiet, and dangerous as a place, don’t venture out there,” they had said.

I looked at the Bhuvaneshwari temple atop the distant Nilachal hills. It sat beyond the Kamakhya temple — a silent observer of the city. I had seen the exact opposite view from there too. From the top, the river looked like an innocent blur, moving slowly, like a heavily pregnant woman. There were no stains of the water’s destruction on Umananda though; it stood like a small stubborn embodiment of resistance against the menacing waters. A voice called out to me, ‘baideo jabo neki?’(sister, do you want to go upstream?). I looked at the young man who had called out in my direction. Without realising it, I had walked down the steps, close to the water. On a whim, I stepped into his little boat, Jol Pori, written in red on both sides. “Two hundred Rupees hobo de” (It will be two hundred rupees, ok?), he said. I nodded. With a quick push, we were in the waters. I looked back in excitement; it was heady, this sudden going away into the unknown waters. The waters of the Brahmaputra are deceptively deep — I had read it many times over. And now, as the boat sped towards Umananda, the low hum of the motor overpowering the water currents, I felt a twinge of uneasiness at my sudden impulsive decision to visit the island.

The rocks were darker and sharper than I had assumed. My feet within the cheap canvas shoes hurt, where the sharp edges came in contact with the thin peels of my student stipend affordability. The man had given me a hand while helping me out of the boat, warning me to be back before the high tide set in. You could hear the winds howling here, the small trees jutting at awkward angles, somehow managing to hold on and survive, the constant threat from the waters below. The Langurs stared at me, and then with sudden screams jumped from one tree to another. You come upon the temple rather suddenly. Not surprising, given the size of the island. I sat on the temple premises for a bit, looked around and then rang the bell. A pujari came out hearing the chime, smiled hesitantly and offered some prashad and as quickly, retreated. Left to myself, I wandered around to the other side and slowly made my way down to the dark rocks, where the waters constantly made music. There seemed to be a natural shelter of sorts hidden within the rocks that I could glimpse from the top. It looked almost like a small cave from a distance. As I made my way down to the shelter, I suddenly heard music. I was startled: was it really someone playing a guitar? But before I could even react to the sudden music, I had already slipped and made a small splash. The music stopped, and I looked up from my pathetic state to see a man in his thirties, holding a gun in his hand, that was aimed at me.

The activities of the dreaded and violent ULFA (United Liberation Front of Asom) had escalated since the 1990s. The group had, however, garnered a lot of public sympathy. They were local heroes even when they fought a very dangerous battle with the Indian Army through their different hideouts in Assam. Every other day, there was someone dead and jungle whispers described these men as the toughest and most dangerous you could ever encounter. But there was a phantom-like mystery that surrounded these stories. No one knew them, no one recognized them and no one saw them — not unless they wanted to be seen, that is. And yet, the state was full of them and their whispers. 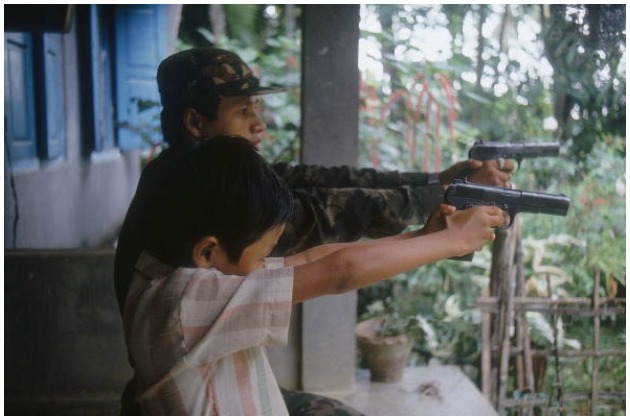 How does a girl on a lonely island react to a man aiming a gun at her? I had no idea, so I stood still, too frightened to react. There must have been something in my face that made the man put back the gun in his pocket. He stared at me for a full minute, before offering his hand to help me out of the waters. I sat down then, on the dry rocks, as he casually picked up a guitar.

After what seemed like an eternity of silence, he looked at me and asked, “Do you sing?,” I hung my head without a reply. He seemed not to notice, and instead strummed the guitar and began humming lines from a popular Zubeen Garg song:

(In the roads of life,
if I’m defeated,

be the hope for my fight.
On the dark roads that I face,

be the lamp that brings in the light)

Zubeen was our pop icon and everyone loved his romantic songs. I had heard the lines being sung numerous times on the University campus; in fact, he had performed it himself at our annual fest. Never had I imagined though that I would be hearing his song being sung under these circumstances. There was nothing left for me to do, and slowly I found myself enjoying the music, even humming along. Before long, we were both singing softly and in tandem. I could see the waters rushing more distinctly now; the man had placed his toes in the water and indicated with a tilt of the head that I might enjoy it, too. After a while, he stopped singing and asked me my name. Rather nervously, I asked him too. He looked at me straight then, rolled up the sleeves of his shirt and indicated two bullet marks on his arm. I had never seen anything like it and looked away hastily. I could feel him smiling at my back. A gust of wind blew my hair around and I felt a finger from the back rearrange them.

Someone called suddenly, ‘Baideo ase neki?’(sister, are you there?). I was jolted, it must be the boatman looking for me. The tide had begun to rise and I knew I needed to leave. Without a word, he helped me up. It was a strange feeling; I was almost reluctant to step out of this spell. But I stood up and brushed the wet mud off my pants. Before turning around, I looked at him, and he stared back. Without a word, I then walked back to where the boat had been bobbing up and down. For a minute, I wondered if he would call me back, he knew my name now. But only stillness followed me, the winds shrieked, mimicking the gulls in the sky. While on the journey back, I wondered what it was that I had felt while I sat there, and why the sweep of sudden loneliness had enveloped me.

In all probability, I might have met with one of the dreaded men from the ULFA. Of course, I had no way of confirming this, and we had spoken nothing except him asking my name. But one knew certain things intuitively, and this was one of those things. But this man had strummed the guitar, played with the water and sung out loud songs of love — could he have been a killer?

I did not share my experience with anyone when I was back in the hostel. It made no sense, none of it did. Did I ever go back to Umananda? Did I revisit the cave where a man with a gun had sung songs with a girl fresh out of college while the waters touched their feet? The golden langurs, they say, still thrive in Umanada. And, when the tide is just about to strike, the waters still make love to the dark rocks on the other side of the island.

('There’s Something Moving in the Background' is a poem by the author, first published in northeastreview.com. It describes the small activities of the city flower sellers on the Sukreswar Ghat, with the river Brahmaputra in the background.)

1 Held For Poaching In Chilika