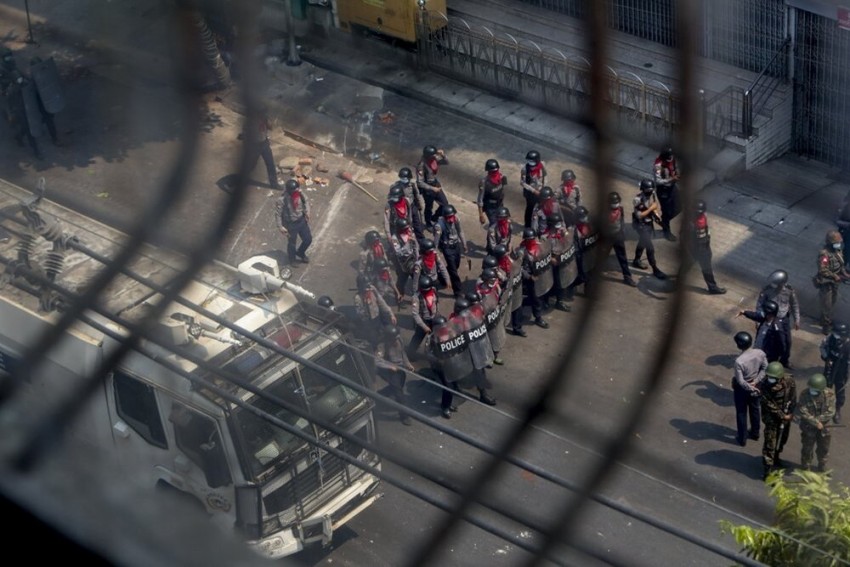 Policemen and soldiers armed with guns, sling-shots and shields advance towards anti-coup protesters in Mandalay, Myanmar, Wednesday, March 3, 2021. Demonstrators in Myanmar took to the streets again on Wednesday to protest last month's seizure of power by the military.
AP
Seema Guha 2021-03-28T17:13:50+05:30 10 Reasons Why India Is Silent As Myanmar’s Military Murders Protestors 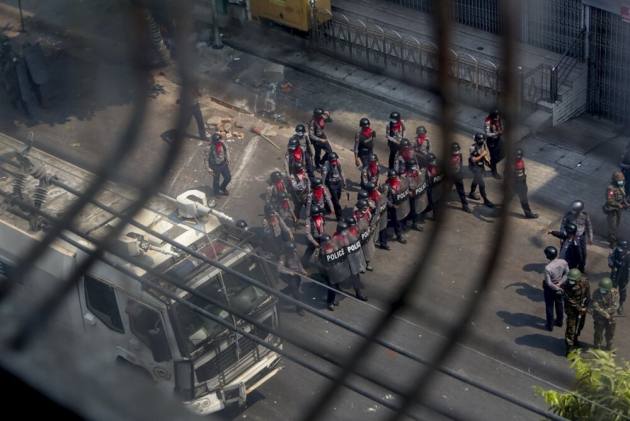 The military in Myanmar is getting away with the savage murder of hundreds of protestors simply because the international community has no way to stop the massacre. The US and Western democracies can continue issuing warnings, they can announce targeted sanctions, but so long as the regional powers – China and India, as well the ASEAN group of which Myanmar is a member-- do not act, the army knows it can act with impunity.

In the past India, Myanmar’s neighbour and the world’s largest democracy would have made a noise and opened its doors to those fleeing the crackdown, but now strategic considerations overrule humanitarian considerations.

1. In the past the Congress governments of  Prime Ministers Indira and subsequently her son Rajiv Gandhi had backed the pro-democracy protests in Myanmar and broke off all engagement with the military rulers of the country. The leader of the National League for Democracy, Aung San Suu Kyi was detained and popular support in India was with her. Suu Kyi had spent much of her girlhood in Delhi when her mother was Myanmar’s ambassador to India. Activists and students fleeing the military rulers were welcomed with open arms by both the public and the government in New Delhi.

2. But by 1991, when Narasimha Rao became Prime Minister, New Delhi changed its policy. Realising that China was stepping into the space vacated by India, the Congress PM took the decision to engage with the military leadership.

3. China’s presence in Myanmar which adjoins India’s sensitive northeastern states was a cause for concern for the government. Insurgency at that time was at its height in the northeast and various groups would cross over to Myanmar to escape the Indian forces.

4. But while engaging with the military, India did not turn away the thousands of Burmese refugees who fled Myanmar. Delhi played both sides at that time.

5. Now however the world has changed. The India-China rivalry has accelerated. New Delhi does not wish to antagonise the military and give China even more space in Myanmar. So chances of India intervening or even welcoming refugees are dim, though the threat of insurgency has come down significantly in the once-troubled northeastern region.

6. Instead, the Home Ministry sent out an order to the northeastern states to close the borders with Myanmar, and not allow protesters from Myanmar to come in.

7. The local authorities in Manipur, which is under BJP, rule have tried to follow the Centre’s orders.  But in neighbouring Mizoram, the regional party government of Chief Minister Zoramthanga has welcomed those fleeing the regime with open arms.

8. Mizos have ethnic and cultural relations with Myanmar’s Chins, who belong to the larger Zo ethnic group and consider themselves as one family. As several groups of Myanmarese --including policemen unwilling to fire on unarmed demonstrators-- entered Mizoram, they were welcomed by state authorities. Myanmar authorities want all policemen who fled to India to be handed back.

9. China will not act against the Myanmar military as it has both strategic and commercial interests in the country. In fact during crippling sanctions slapped on Myanmar in the past by Western governments, it was China which stood by the generals. This time the sanctions are targeted against senior military generals.

10. The  ASEAN,  which works through consensus, is unlikely to act as it believes in the Asian way of doing things.

So, long as these dynamics don’t change, the Junta in Myanmar will continue to get away with murder.

This School In Maharashtra Gave A Makeover To A Dead Tree, Now It's A 6-Feet Pencil!