India Is A Stakeholder In Korean Peace Process: PM Modi

In the talks, the two sides agreed to significantly enhance cooperation in a range of areas including defence and security, artificial intelligence, trade besides resolving to work together for regional peace and prevent proliferation of weapons of mass destruction. 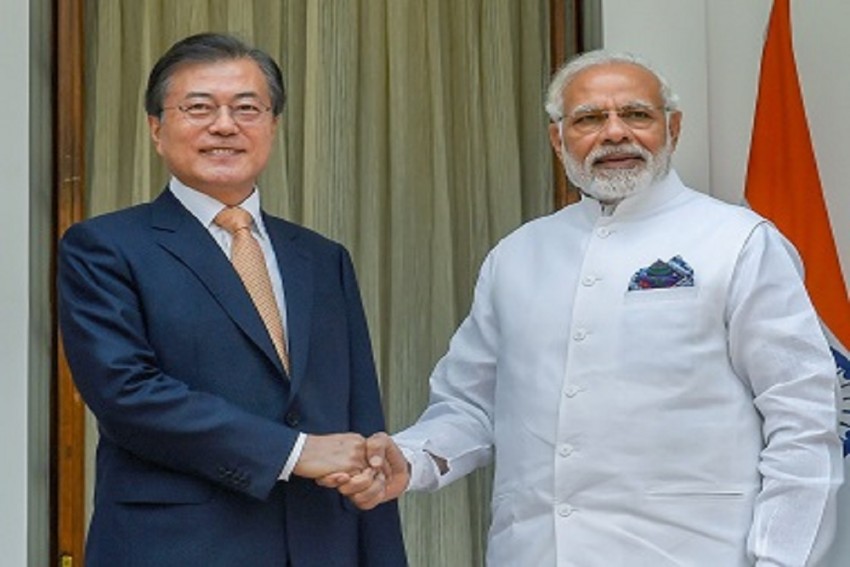 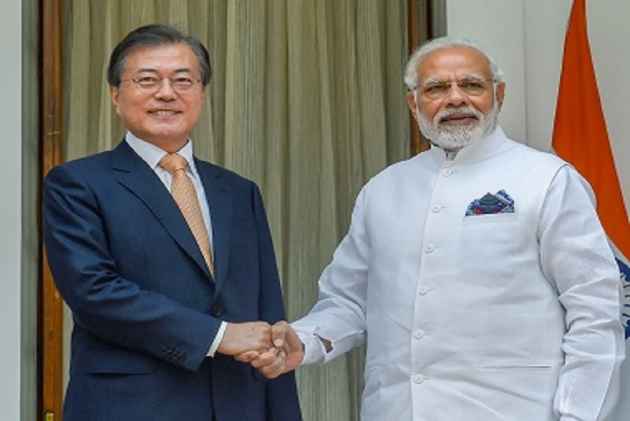 Prime Minister Narendra Modi on Tuesday said India is a stakeholder in the peace process in the Korean peninsula after he held wide-ranging deliberations with South Korean President Moon Jae-in that focused on deepening strategic cooperation between the two countries.

In the talks, the two sides agreed to significantly enhance cooperation in a range of areas including defence and security, artificial intelligence, trade besides resolving to work together for regional peace and prevent proliferation of weapons of mass destruction.

The two countries inked a total of 10 agreements covering a broad spectrum of areas for cooperation and signed a document to facilitate negotiations to upgrade the Comprehensive Economic Partnership Agreement (CEPA).

At a joint media event with Moon, Modi indirectly referred to North Korea's proliferation linkages with Pakistan and that it was a reason why India is a stakeholder in the peace process.

"During our talks, I told President Moon that proliferation linkages between North-East Asia and South Asia is a matter of concern to India. Therefore, India is also a stakeholder in the peace process. We will do our bit to ensure peace," Modi said in his press statement.

India has been pressing for a probe into North Korea's nuclear proliferation linkages with Pakistan and demanded that those responsible for it should be held accountable.

The two sides also released a vision document articulating ways to boost their strategic cooperation and reaffirming convergence of their views in dealing with maritime conflicts, in a clear reference to China's expansionist behaviour in critical sea lanes.

The vision document said the two leaders also reaffirmed that terrorism cannot be justified on any grounds and sought coordinated regional and global efforts.

It said both sides agreed to explore further possibilities to coordinate efforts in defence and strategic spheres and will enhance military exchanges, training and experience-sharing.

The two sides also resolved to work together to prevent proliferation of weapons of mass destruction and delivery systems, particularly to terrorists and non-state actors.

Referring to the recent summit between North Korea and South Korea and talks between US President Donald Trump and North Korea's Kim Jong-un, the two leaders hoped that these developments will contribute to complete denuclearisation as well as lasting peace and stability in the Korean Peninsula.

The Korean side also supported India's bid to become a member of the Nuclear Suppliers Group.

Referring to disputes in the maritime sphere, the vision document said both Modi and Moon recognised the link between prosperity and security and reaffirmed the importance of freedom of navigation, overflight and unimpeded lawful commerce.

"We supported initiatives for peaceful resolution of conflict through dialogue, underlying the centrality of sovereignty and territorial integrity, in accordance with the universally-recognised principles of international law," it said, seen as a clear reference to China.

Besides this, India and South Korea also signed 11 Memorandums of Understandings  (MOUs) on diverse subjects.

The agreement was signed by Union Commerce and Industry Minister Suresh Prabhu from the Indian side and Minister for Trade, Industry and Energy Kim Hyun-chong from the South Korean side.

A MoU on trade remedies was also signed for cooperation in the area of trade remedies such as anti-dumping, subsidy, countervailing and safeguard measures through consultations and exchange of information through the establishment of a cooperation committee, comprising government officials and domain experts.

A MoU on future strategy group was inked for cooperation in the development of cutting-edge technologies for commercialisation to reap the benefits of the fourth industrial revolution.

The agreement was signed by Minister Prabhu and Union Environment and Science Minister Harsh Vardhan from the Indian side. From the Korean side, Minister Kim Hyun-chong and Minister for Science and ICT (Information and Communication Technology) You Young Min signed the agreement.

An agreement on a cultural exchange programme for the period 2018-2022 was signed to deepen cultural and people-to-people relations by providing for institutionalised cooperation in fields of music and dance, theatre, art exhibitions, archives, anthropology, mass media programmes and museum exhibits.

A MoU on cooperation between Research Design and Standards Organization (RDSO) and Korea Railroad Research Institute (KRRI) was signed for cooperation in railway research, exchange of railway-related experience and development of railway industries.

Both the countries will explore plans and execution of joint research projects, including setting-up an advanced railways Research and Development (R&D) facility in India.

It was signed by Union Environment and Science Minister Harsh Vardhan and Minister for Science and ICT (Information and Communication Technology) You Young Min.

A MoU on cooperation in the field of ICT and telecommunications was signed for cooperation in development, modernisation and expansion of state-of-the-art telecommunication/ICT services and next-generation wireless communication networks such as 5G, cloud computing, big data, IOT, AI and their applications in services, disaster management, emergency response, and cyber security.

It was signed by Minister of State of the Ministry of Telecommunications Manoj Sinha and Minister You Young Min.

A MoU on cooperation in the field of Micro, Small and Medium Enterprises (MSMEs) between India and RoK was signed between the National Small Industries Corporation of India and the Small and Medium Business Corporation (SBC) of South Korea. The agreement was for cooperation in the development of MSMEs in both countries and in improving their competitiveness in global markets.

The two countries will also explore the possibility of establishing an India-RoK technology exchange centre.

A MoU on Queen Suriratna memorial project was signed to facilitate upgradation and expansion of the existing monument commemorating Princess Suriratna (Queen Hur Hwang-ok), a legendary Princess of Ayodhya, who went to Korea in AD 48 and married King Kim-Suro.

A large number of Koreans trace their ancestry to this legendary princess. The new monument will be a tribute to the shared cultural heritage and long-lasting friendship between India and RoK.

A MoU between the Gujarat government and Korea Trade Promotion Agency (KOTRA) was inked to enhance industrial and investment relations between South Korean companies and Gujarat through cooperation in areas of urban infrastructure, food processing, agriculture-related industries, startup ecosystem, skill training and development and new and renewable energy.

KOTRA shall open an office in Ahmedabad and will become one of the partner organisations for the Vibrant Gujarat Global Summit 2019.