Home  »  Website  »   »  India Have The Mental Resilience But Have To Cut Out Distractions At Tokyo 2020: Hockey Coach Graham Reid

India Have The Mental Resilience But Have To Cut Out Distractions At Tokyo 2020: Hockey Coach Graham Reid

A rejuvenated Indian men's hockey team is seeking to redeem its Olympics glory at Tokyo Games. Excerpts from a chat with head coach Graham Reid 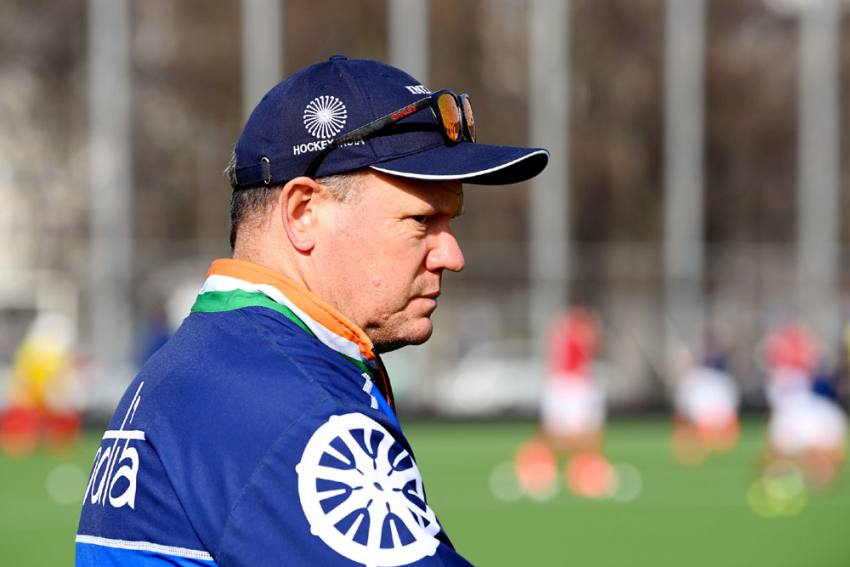 It’s been a tough job for Graham Reid to keep the team motivated since April last year when the pandemic broke.
Courtesy: The Hockey India
Soumitra Bose 2021-07-18T10:14:19+05:30 India Have The Mental Resilience But Have To Cut Out Distractions At Tokyo 2020: Hockey Coach Graham Reid 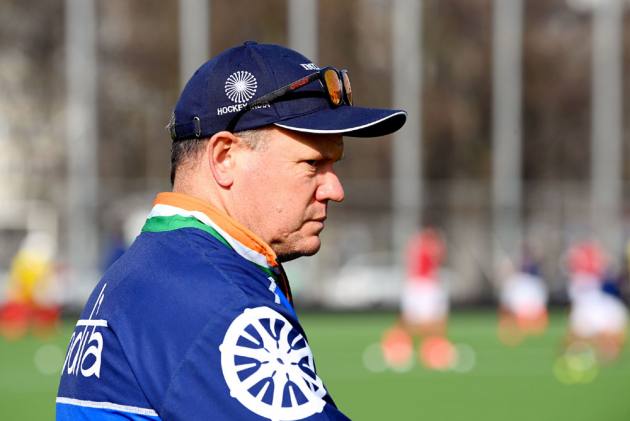 In spite of being in a tough group with defending Olympic hockey champions Argentina, multiple world champions Australia and the always dangerous Spain, the Indian men’s hockey team will back itself to advance to the knockout stages from Pool A. It’s been a tough job for Graham Reid to keep the team motivated since April last year when the pandemic broke. The 57-year-old former Aussie Olympian, who joined the Indian men’s team as head coach in April 2019, feels it’s time to beat the odds and focus on the job at hand – end up on the podium. In Rio 2016, Indian men lost in the quarterfinals. Four years ago, in London, India, who have won eight Olympic gold medals, lost all their five matches to hit a record low. In Tokyo, India open versus New Zealand on July 24 at the Oi Hockey Stadium. Excerpts from a chat with Reid.

Q1. With just about four weeks to go before India's first match against New Zealand, your heart must be racing ...

Yes, it’s time to get close now. If you go there you can get yourself pretty excited and worked up about it but we need to stay focused on what we need to do before we leave and focus on things that we can control like training and preparing for each of the opponents before we get there.

Q2. This is obviously going to be an 'extra-ordinary' Summer Games. What's going to be very different this time?

Yes, it is certainly shaping up to be a different Olympics. Things like daily testing which is definitely going to be very different. Our limited movement…what we really don’t know what it looks like till we get there. But this will be quite different from things like mingling with other athletes and what have you not be allowed so those sort of distractions …so probably those could end up as positives because one of the things that you find with an Olympic Games that there are a lot of distractions and we can minimise those distractions and stay focused on what we are there for.

Q3. For almost two years holed up in a training Centre (SAI Bangalore), do you think monotony had set it? How challenging was it for you and the players?

Proud of the boys for the way they have handled the last 15-16 months. It was a tough period for everybody concerned including the staff who have not been able to see their families pretty much at all…It’s like the grand old day when you get and do the same things…we found when went to Germany and Argentina that morale lifted during that period …it was a good opportunity for us to get outside and do the stuff we love doing which is competing internationally. Those games provided a lot motivation and that’s what we are looking forward to now. 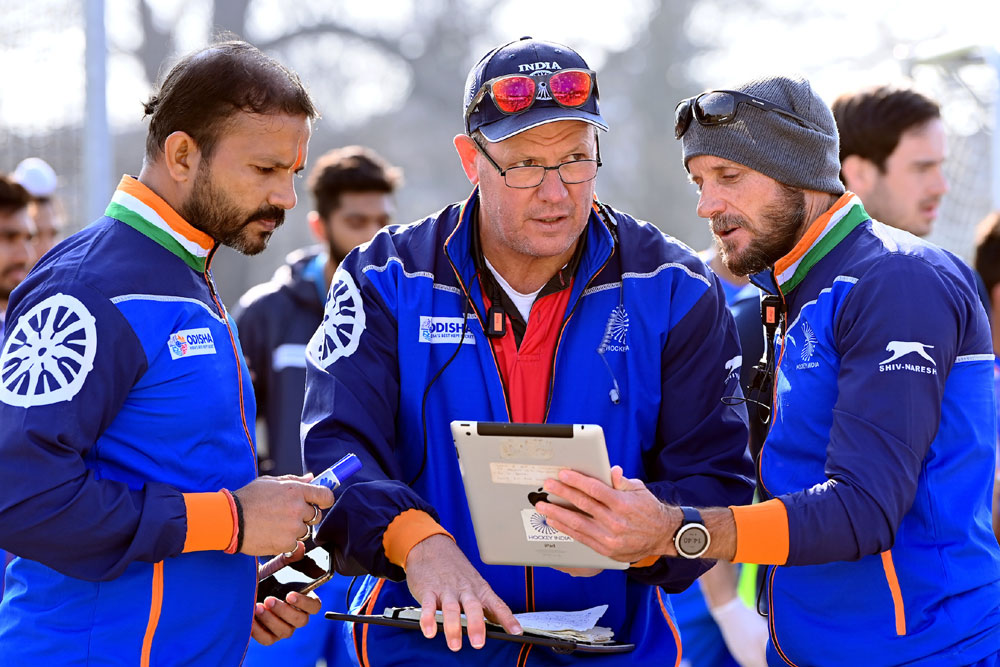 Q4. Players did get mini breaks but someone like a newly-wed Manpreet Singh, how difficult it is to reconcile from a mental point of view.

Couple of mini breaks – that’s about all. It’s been difficult…first birthdays missed…first walking ceremony missed and milestones like that …says a lot for the sacrifices that are being made …it’s an unbelievable experience to go to the Olympic Games and that’s what keeps people motivated.

Q5. We keep speaking about mental health. But looking at IPL 2020, once you step onto the pitch, it's about how you play and execute the plans. Bio-bubbles have become a part of an athlete's life. So, what's going to be different?

In the last 16 months the mental resilience of this group has risen dramatically …sharing such an experience like this together bonds the group I feel and when we get to Tokyo we will be in a bio-bubble but that’s what we have been doing. In Tokyo we will be in similar condition so bring it on and we have the resilience to be successful.

Q6. Ten debutants in the Olympic squad; one goalkeeper and six from the team in Rio -- could you reveal the strategy behind this combination?

When it comes to selection, people come to read more things into it than it is there…won’t call it a strategy but will say criteria …things like current performance, past playing record, physical qualities, technical skills, set play skills, flexibility and versatility in this squad is very important and the ability of players to play across different lines like midfielder playing defence or defence playing striker and those type of flexibility and the big one for me is team-first mentality. The humidity in Tokyo will also play a role and we have picked the best team we possibly can and it doesn’t matter whether he has been to the Olympics or not been to the Olympics. I have experience of four Olympics and this is the best team available.

Q7. The cancellation of the FIH Pro League matches against Spain, Germany, England and New Zealand have robbed the team of much-needed match practice. Will that hurt?

Cancellation of the European trip was a huge disappointment. We missed out on that piece of the puzzle that goes with Olympic selection. We have focused on our own internal competition and that’s what we have done. But yes, we would have loved more competition of course but we can’t dwell on that…and continue to build on what we have.

In every Olympics, pools are difficult. In the four Olympics that I have seen and this will be the fifth, each of the pools have hugely competitive teams and this is no exception. Since the advent of quarterfinals, it brings the other pool into consideration as well. That’s why it is very difficult to ascertain the chances and we will take every game as it comes…we have pretty much beaten every team over the last two years and so the ability for us to win those games are there and we just need to make sure that we focus on our game plan and executing and the result will look after themselves.

Q9. The COVID protocols in Japan are unusually stricter for India. This was unavoidable given the number of cases India had. Do you think it is fair on part of Japan to protect the Games from the virus the way it has devised the playbook? Will it impact India's campaign?

We are invitees to their country so we have to play by whatever rules they determine and that is their right to do that. We just have to work our best way through it and we will do that. We are able to train and hopefully we will be able to play a practice game when we are in Tokyo…we will live with whatever rules are created.