Reduced to 14-2, Tendulkar (44) and Dravid (32) led the fightback with their 69-run stand. But, Laxman's dismissal off the day's last ball left them at 156-5 with Ganguly and Dhoni fighting it out. 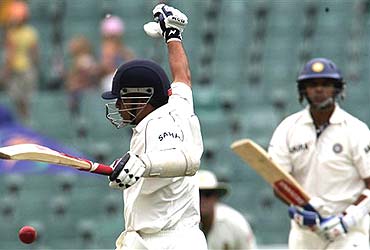 India were 156 for five at stumps on day one of the first Test against South Africa at the Wanderers in Johannesburg on Friday.

Proceedings in the day were marred due to a damp pitch, an intermittent shower and finally bad light.

Sourav Ganguly and Mahendra Singh Dhoni, who had just walked in at the fall of VVS Laxman’s wicket, decided to head back to the pavilion as soon as the umpires offered the light to the batsmen. The over from Makhya Ntini remained incomplete, with one delivery yet to be bowled.

In all, only 56.5 overs were possible on the first day’s play and proceedings on day two on Saturday will start half hour early to make up for the lost time.

Earlier, electing to bat after winning the toss, India's batting woes continued as the openers once again fell without making any contribution.

Little master Sachin Tendulkar wasn't averse to making good use of open spaces with sumptuous drives and flips over the slips' heads while Dravid was intent in blunting the pace attack of the South Africans.

Both were taken out of the equation by the nagging line of Jacques Kallis who, surprisingly, was the best bowler for the hosts on the day.

Kallis had both Tendulkar and Dravid caught in the slip cordon with deliveries that left them a shade.

After Dravid was out, India at 110 for 4 appeared in a bit of trouble but the duo of Laxman and Ganguly ensured there were no further hiccups.

Laxman gave vent to his range of strokes while Ganguly showed an unflinching resolve, holding his ground even after being hit painfully on his shoulder by Andre Nel.

The South African pacemen seemed to carry the hangover of one-day matches and didn't expect India to hold their ground.

They wanted a wicket off every ball and it made them sacrifice their line and length.

Much of this trend was set by Dale Steyn who wasted the new ball and later limped off the field because of thigh strain, the injury which had kept him out of action much of the last three weeks.

Just before the stumps were drawn because of bad light, Laxman departed, edging a catch behind the stumps to Ntini after making 28 from 103 minutes of batting and hitting five fours from 67 balls.

Ganguly retired to live another day and has so far batted for 72 minutes for his 14 runs from 42 balls with two fours.

Mahedra Singh Dhoni came and went back without facing a ball as umpires offered the lights and the batsmen accepted.

Earlier, India were off to a troubled start with the two openers - Wasim Jaffer (9) and Virender Sehwag (4) - falling within a space of five deliveries.

Jaffer shouldered arm to an incoming delivery from Makhaya Ntini and was ruled out leg before wicket while Sehwag fell to Shaun Pollock, hanging out his bat and edging a catch to Mark Boucher.

Jaffer had looked in good touch and was helped in no less measure by a rather wayward Steyn upfront.

He once pulled Ntini for a four and later also guided Pollock past point for his second boundary.

Jaffer batted for 42 minutes and 40 balls and hit two fours in his knock of nine runs.

Sehwag, quite uncharacteristically, tried to stay put at the crease and repeatedly shouldered arm to deliveries bowled outside his off-stump.

Only when one hoped he would see through the first session, he hung his bat out and was out for 4, having faced 26 deliveries.

Dravid, out of action for three weeks, had a nasty moment when a rising Pollock delivery hit him painfully in the ribs.

Tendulkar had a couple of close moments against Ntini and Pollock.

India omitted Harbhajan Singh from their squad while South Africa took the expected decision of going in with four frontline fast bowlers.

Meena Kandasamy / In the final part of her 4-part series, poet and activist Meena Kandasami draws conclusions from her in-depth report from Ground Zero of an unfolding grassroots movement in Tamil Nadu.