In The Darkness Of Prejudice

How a Brahman youth the novelist Sarat Chandra Chatterjee had helped out became a Muslim butcher... 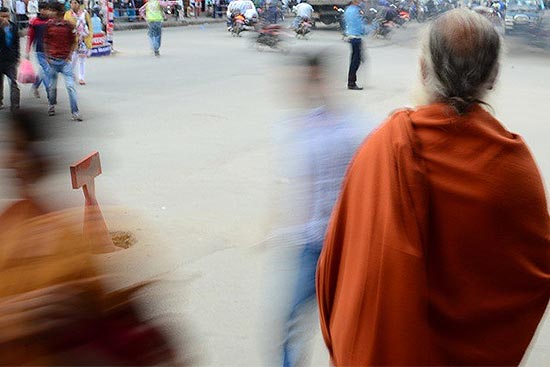 Aawara Masiha (1974) in Hindi, authored by Vishnu Prabhakar, to my knowledge, is the best biographical account of novelist Sarat Chandra Chatterjee (15 September 1876 – 16 January 1938). This volume has been rendered in many Indian and foreign languages and has won many national and international wards. Prabhakar narrates a personal experience of the novelist, which assumes profound relevance at a time when cow and beef have thrown the country into turmoil touching communal tempers.

Sarat Chandra Chatterjee helped a fellow young Bengali Brahman, Chakraborti (first name withheld) who had migrated from Chittagong to Rangoon in search of livelihood. The novelist had lived a considerable phase of life in Rangoon, Burma. On his recommendation, a very successful teakwood merchant had engaged Chakraborti as a clerk. After a few months, the clerk met Sarat Babu who noted that he had discarded his dhoti, shirt and footwear. Instead a tuft of hair, namawali or chaddar printed with Ram naam thrown over his shoulders and forehead daubed with chandan paste startled Sarat Babu. "How come you are in a full-fledged purohit's garb?" Chakraborti replied, "Sir, whatever salary I used to get as a clerk was inadequate for my comfortable living. So, I took up priestly business. There are many Bengali Hindus who need ministerial services. Now I earn more than what I was drawing as a clerk in the mercantile establishment."

Thereafter Sarat Babu did not see him for years. Once he had gone to Memyo, a beautiful hilly town in northern Burma. "There once I taking a morning walk in a park when I saw a Muslim gentleman approaching towards me from the opposite direction and he called out my name." On reaching me, he enquired, "Do you recognise me, Sir?"

Sarat Chandra Chatterjee failed to recognise the stranger who then laughed and said, "I'm that Brahman youth -- Chakraboti from Chittagong, you helped secure a job in a mercantile establishment in Rangoon."

At this Sarat Babu took a close look at him and asked, "Why have you adopted such a strange way of dressing? He replied, "I've converted to Islam and become a Muslim. What could I do, Sarat Babu? My priesthood did not ensure a steady income which started declining with the passage of time. I don't know English to get a suitable job. So, in search of livelihood, I came to Memyo. Here I met many Bengali Muslims and befriended them. One of them, a meat shop owner, provided me shelter at his home. He was doing well in his business. Slowly, I started working with him. Later I embraced Islam."

He continued, "Suddenly my employer died one day. His widow married me after sometime. I became the owner of the business along with all his properties. Now I am a rich man." The vagabond's journey as a Brahmin purohit to the butcher of cows and seller of beef was absorbing. Sarat Chandra asked him, "what kind of meat do you sell?"

"I sell the meat of lambs, goats and cows," replied he. "My customers include people from various communities and faiths. I've to meet their needs."

"Who does the butcher's job?" asked the novelist.

"Previously I had employees for slaughtering animals," pat came the reply. "To save on wages, I myself started slaughtering. However, I need help for butchering cows. Alone it is difficult for me," he replied.

"I was totally dismayed. He was a Brahman by birth and culture. Nevertheless how did this happen?" Sarat Chandra pondered deeply whether education, upbringing, social environment, heredity and family values are simply like a cheap apparel which can be thrown to the winds remorselessly at whims? He was of the view that the attitude of man determines many things. His real character manifests in his decision and action when he is encountered by overpowering emergencies in personal life.

A discussion between Sarat Chandra Chatterjee and Suniti Kumar Chatterjee, (26 November 1890 – 29 May 1977) brought the episode to light. The latter was a celebrated linguist.

The biographer further touched upon the novelist's Bilasi, a story by Sarat Chandra. He wrote, "I have seen a Kayastha young man of a wealthy and aristocratic family who married a butcher's daughter. He now slaughters cows and sells beef himself with such skill that nobody can believe that he was never ever a butcher."

In another work of popular fiction, Bamuner meye (Brahman's daughter) Sarat Babu spoke of Golak Chatterjee, the mischievous zamindar and the village headman who also is the arbitrator of caste issues. He boasts about how he can excommunicate anybody if he so desires in the blink of an eye. Golak was an exporter of cow hides which nobody ever had the courage to challenge. He is deeply worried lest the first world war then under progress came to an end abruptly leading to losses in his business. So, he prays earnestly for the continuance of hostilities to yield benefits from his export trade for some more time.