'I Write What My Inner Voice Says'

The 37th Jnanpith awardee seems unaffected by the recent hype around him, just as he says he has elevated himself above temporary phases such as the recent violence in Gujarat. Even Mahatma Gandhi, he says, couldn't unite the Hindus and Muslims. He j 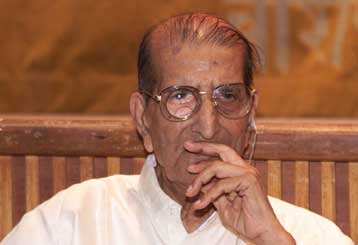 For Rajendra Keshavlal Shah, the Gujarati poet recently honoured with the prestigious Jnanpith Award, life seems to have begun at 91. There is a barrage of telephone calls and visitors dropping by at every which hour. Not to mention the journalists. But try telling him this and he shrugs it off: "It (the award) might make a difference to you, for me I was as happy without it as I am today with it." In others it might sound fake, but after talking to the man whose world begins, flows and ends within himself, the claim seems totally believable. The only things that speak of his age are the wrinkles and his being a little hard on hearing. Otherwise, his voice has a resonant echo, and his eyes sparkle with an indomitable spirit. His mind too is absolutely focused as Outlookindia.com learnt during an interview at his house in Ahmedabad. Excerpts:

You are only the third Gujarati Jnanpith award writer. What do you think of the state of Gujarati literature today and what is the reason it is not getting the due recognition nationally or internationally?

I don't make any comparisons of literary writings, whether of Gujarati or other languages, so have no comments, either favourable or otherwise. About recognition, I just don't bother. I express myself and forget about it. If you like, read; if you don't, don't read my writing. I am okay with both. About recognition, what do you expect us to do? Do you think we should advertise in the papers? You ask this, but do you know T.S. Eliot - I am talking about the famous T.S. Eliot - could sell only 25 copies of one of his works in England. But so what?

You are credited with pioneering a different genre of Gujarati literature, away from the influence of Mahatma Gandhi and Tagore. What is this style of literature and how different it is from others?

I don't have any definition of my work, I don't wish to have one. Everything I have written has evolved naturally. I write what my inner voice says. I don't make any comparisons between different writings. Whether my work has any particular style or not is for the readers to judge. Read the poems and decide.

You are saying you write according to your 'inner voice'. What do you feel about the violence in Gujarat last year and other such tragedies that occur in the country or world? Do they influence your poetry?

What do you mean? You think I should go out and unite the Hindus and Muslims? Even Mahatma Gandhi could not do so. See, all this - riots, tragedies etc - is a temporary phase, they have come and gone through the ages. I have never felt like writing on such things. I feel I have elevated myself above such things.

In that case, what inspires or influences your work? Have the sources of inspiration changed over the last six decades that you have been writing? Have you changed as a poet over the years?

There is either of the two things in anyone's writing: prerna [inspiration] or sfurna [something that comes from within]. I write with sfurna, which happens when one is with oneself and has unexplainable inner experiences. There is a vast world inside. Outside influences have never moved me.

You have been a teacher, a grocer, a businessman and a printing press owner. Has professional or personal life had no influence on your writings?

Not at all. While I was in my business premises, I thought only of business. Once out of it, I am a scholar. I can work by compartmentalising, without any overlap whatsoever. I never did overtime in my life. As for my poetry, there was no fixed time for composing it.  If something comes in my dream in the dead of the night, I just wake up and write it down. Sometimes I have not written for months, and sometimes went on writing for months non-stop.

Many say your poetry is in continuation of that of the great Narsinh Mehta, Kabir and Akho. Would you agree? How relevant is their philosophy today for the society and for a poet?

It is for others to judge if my poetry is in continuation or different, who am I to say that? As for the relevance of their philosophy - truth is the same everywhere, all the time.

What did you make of Salman Rushdie's controversial claim in 1997 that the only literature of note to have come out of India since Independence has been in English?

I don't care a damn about who says what, for I don't know the basis of this conclusion and anyone's locus standi to sit in judgment. Neither do I know what he or someone else has read in Indian literature, nor do I wish to. I write my poetry, my literature. I am not a part of such meaningless debate.

What do you think of writers as activists? People like Mahashweta Devi, Arudhati Roy and Geetha Hariharan have taken an unambiguous public stance against crucial social and developmental issues and are actively campaigning in their respective areas.

Anyone has a right to do whatever in his or her individual capacity. If they feel strongly about something, they can make use of their talents in different ways. Dante was also a politician. That does not take away or adds to their literary abilities.

What do you think about the hype surrounding Indians writing in English? Authors like Pankaj Mishra, Vikram Seth, Rushdie, Arundhati Roy have become international stars.  Do you have any views on their writings?

(Shrugs) I don't think about them, for I have not read them. Even otherwise, I don't make comments on writings of others. They write what they feel like; I write what I feel like.

Has your work been translated into other languages? What feedback do you get from non-Gujarati readers?

A Hindi-translated collection of some of my poems will be out by August 10. It is being done by the Hindi Sahitya Akademi of Gujarat. I will get the feedback after that.

I believe you have also done some translations into Gujarati...

I have translated Dante's Divine Comedy  and Coleridge's The Song of an Ancient Mariner. I have also translated Tagore's Balake and Jayadeva's Geet Govindam from Sanskrit to Gujarati, besides some others.

That Familiar Sound Of Silence