Two days after the Supreme Court ruled out a CBI inquiry into the August 25 incident, the victim read out from a four-page hand-written statement at a packed press conference, insisting that she doesn't want to ' be victimised by the Orissa police' 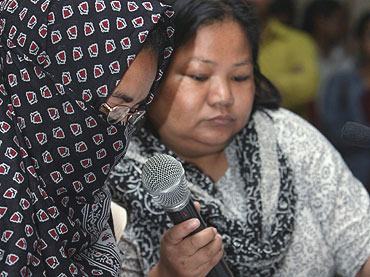 On August 24, around 4:30pm, hearing the shouting of a large crowd, at the gate of Divyajyoti Pastoral Centre, I ran out through the back door and escaped to the forest along with others. We saw our house going up in flames. Around 8:30 pm we came out of the forest and went to the house of a Hindu gentleman who gave us shelter.

On August 25, around1:30 pm, the mob entered the room where I was staying in that house, one of them slapped me on the face, caught my hair and pulled me out of the house. Two of them were holding my neck to cut off my head with an axe. Others told them to take me out to the road; I saw Fr. Chellan also being taken out and being beaten up. The mob consisting of 40-50 men was armed with lathis, axes, spades, crowbars, iron-rods, sickles etc. They took both of us to the main road. Then they led us to the burnt Janavikas building saying that they were going to throw us into the smouldering fire.

When we reached the Janavikas building, they threw me to the verandah on the way to the dining room which was full of ashes and broken glass pieces. One of them tore my blouse and others my undergarments. Fr Chellan protested and they beat him and pulled him out from there. They pulled out my saree and one of the stepped on my right hand and another on my left hand and then a third person raped me on the verandah mentioned above. When it was over, I managed to get up and put on my petticoat and saree. Then another young man caught me and took me to a room near the staircase. He opened his pants and was attempting to rape me when they reached there.

I hid myself under the staircase. The crowd was shouting "where is that sister, come let us rape her, at least 100 people should rape." They found me under the staircase and took me out to the road. There I saw Fr. Chellan was kneeling down and the crowd was beating him up. They were searching for a rope to tie us both of us together to burn us in fire. Someone suggested to making us parade naked. They made us walk on the road till Nuagoan market which was half a kilometer from there. They made to fold our hands and walk. I was in petticoat and saree as they had already torn away my blouse and undergarments. They tried to strip even there and I resisted and they went on beating me with hands on my cheeks and head and with sticks on my back several times.

When I reached the market the market place about a dozen of OSAP policemen were there. I went to them asking to protect me and I sat in between two policemen but they did not move. One from the crowd again pulled me out from there and they wanted to lock us in their temple mandap. The crowd led me and Fr. Chellan to the Nuagaon block building saying that they will hand us over to BDO. From there along with the block officer the mob took us to police outpost Nuagaon, other policemen remained far.

The mob said that they will come back after eating and one of them who attacked me remained back in the police outpost. Policemen then came to police outpost. They were talking in a very friendly manner with the man who had attacked me and stayed back. In police outpost we remained until the inspector in charge of Balliguda with his police team came and took us to Balliguda. They were afraid to take us straight to the police station and they kept us sometimes in jeep. In the garage, from there, they brought us to the station. The inspector in charge and other Government officers took me privately and asked whatever happened to me. I narrated everything in detail to the police, how I was attacked, raped, taken away from policemen paraded half naked and how the policemen did not help me when I asked for help while weeping bitterly. I saw the inspector writing down. The inspector asked me "are you interested in filing FIR? Do you know what will be the consequence?" At about 10:00 pm I was taken for medical check-up accompanied by a lady police officer to Balliguda Hospital. They were afraid to keep us in police station, saying the mob may attack police station. So the police took us to the IB (Inspection Bungalow) where CRP men were camping.

On August 26 around 9:00 am, we were taken to Balliguda police station. When I was writing the FIR, the I I C asked me to hurry up and not to write in detail. When I started writing about the police, the I I C told me, "This is not the way to write FIR, make it short". So I re-wrote it for the third time in one and half page. I filed the FIR but I was not given a copy of it.

At around 4:00 pm the inspector in charge of Balliguda police station along with some other government officers put us in the OSRTC bus to Bhubaneswar along with other stranded passengers. Police were there till Rangamati where all passengers had their supper. After that I did not see the police. We got down near Nayagarh and traveled in a private vehicle and reached Bhubaneswar around 2:00 am on August 27.

State police failed to stop the crimes, failed to protect me from the attackers, they were friendly with the attackers. They tried their best that I did not register an FIR, not make complaints against police, police did not take down my statement as I narrated in detail and they abandoned me half of the way. I was raped and now I don’t want to be victimised by the Orissa police. I want CBI enquiry.