Home  »  Website  »  Sponsored  »  I Grew As A Player In HCL, I Am A Playing Coach In Sify
Outlook Business Initiative

I Grew As A Player In HCL, I Am A Playing Coach In Sify

Born and brought up in Agartala this CEO is still very down-to-earth and derives most of the philosophies of life from the game of football, his favourite sport. A gadget freak and automobile lover Kamal Nath, CEO, Sify Technologies is a go-getter type who does not mince his words. 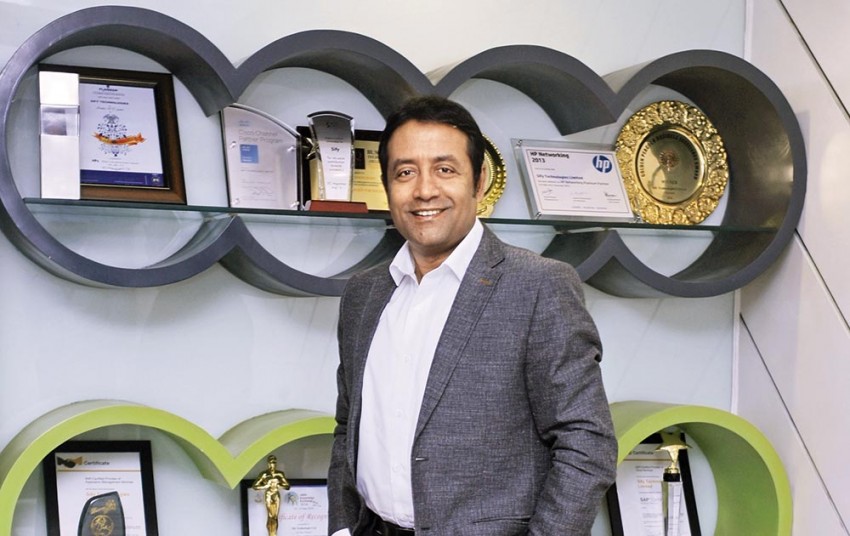 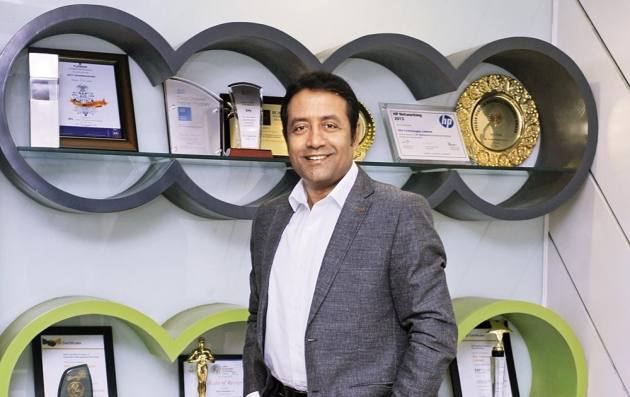 An electronics and communications engineer from BIT Sindri, stayed in Agartala till his high school days. His father, an academician and his mother played a very significant role in shaping his early life. He is the eldest among three siblings.

He joined Sify in 2012 after a 17 and a half years stint in HCL Comnet, a subsidiary of HCL Tech.

Asked what motivated him to study engineering, a candid Kamal said, “Those days options were limited”. “When I look back, I realise that I have ended up doing all the things that I have never planned to do. Till Class XI, I was supposed to become a doctor. But when in Class XII I realised that one has to study so much to become an established doctor! (accompanied with a loud laughter) I chose the second option to become an engineer. I thought engineering was the easier option. I was decently strong in other science subjects also.”

I am the eldest. We are two brothers and one sister. I studied in a school called Shishu Bihar, till Class X and Netaji Subhash Vidya Niketan till Class XII.”

On a lighter note he said in his initial days of school he wanted to become a magazine hawker because during those days popular children magazine like Shuktara used to take long time to reach Agartala from Kolkata. “My objective was to become a hawker so that I can grab the first copy!” 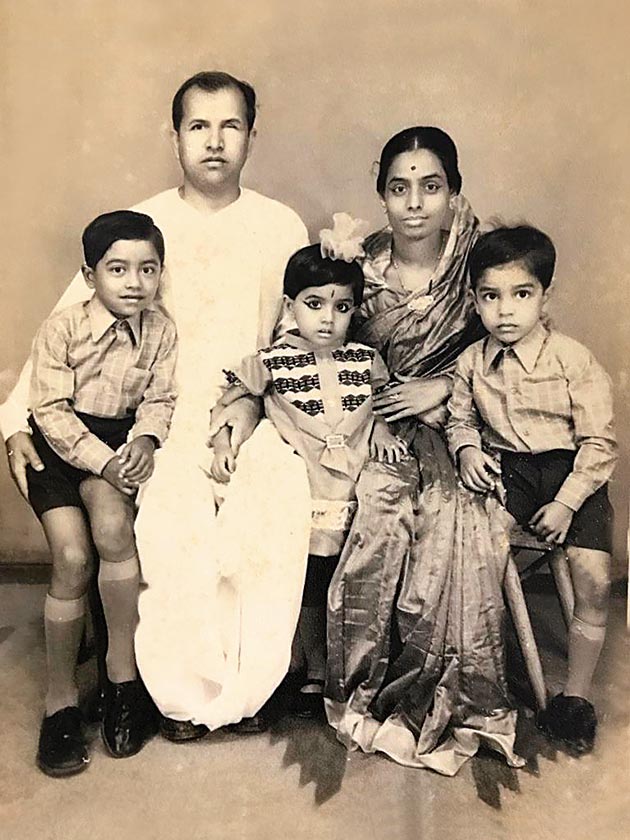 Son of a school teacher, Kamal is an avid reader but a non-text book type. He said, “I read full version Mahabharata in Class II. Bhima was my favourite character in Mahabharata. I liked Bhima because I found him to be non-political, simple and straightforward.”

He said change in his student life happened after mid-term of Class X. “If there is a competitive exam I normally did well. I stood second in Tripura Board Exam.”

Transition from school to college life

Coming from a small town was it difficult for Kamal to adjust in college life?

“It was extremely difficult to adjust. I remember, the first day I was ragged and that was the last day I was ragged because the next day was a Sunday and there was a football match and the way I played football, everybody stopped playing with me,” Nath said laughingly.

“College was a very tough place to adjust initially. College made me very resilient because I grew up in a protected environment at home. Hostel life has a very tough culture. I lost one full year in college because I had fallen sick and had to go back to my hometown. It was a big setback.”

He said college life taught him how to really adjust in a different environment. “There are lots of things people do in college, which are not perfect. But those imperfect things help people a lot going forward to really handle situations, which are not in your favour and help to succeed.”

“I played football to my heart’s content in college. Infact, lot of my philosophies are derived from football. If you are not a footballer, the next exciting thing was to be in the sales profession!” Kamal is a big fan of Diego Maradona not only because of his football skills but because of his ability to carry a team single handedly and making it a winning team, thus inspiring a whole nation and generations to come! 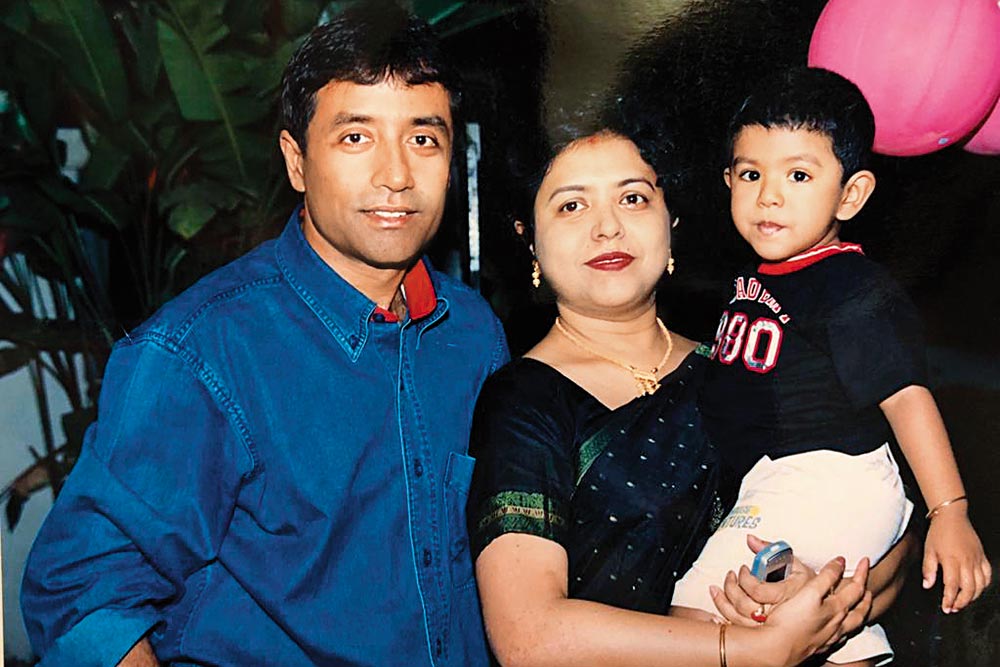 Career begins, so does a new chapter in personal life

Kamal started his first job in 1990. “I started with medical instruments sales and services in Ranbaxy. But my heart was in communications technology. Then I joined Uptron Communications to pursue my interest. From there I had joined L&T and then HCL Comnet, a subsidiary of HCL Tech.

He was in HCL Tech for 17 and a half years. From 1995-2006 he was posted in Kolkata then he moved to Mumbai as country sales head. “My first task in Kolkata was to find a Business Center to operate from. When I completed my tenure I was the sales head for both HCL Comnet and HCL Technologies. My stint there was like being in a management school. If I am able to serve my current role, it is because of my experience there. It was the place where I grew as a player, and now I am a playing coach at Sify.”

Kamal said he had spent a golden period of his life, his youth in HCL. “I got married to Sulata during that time and were blessed with our son Shaunak. I bought my first house in Kolkata thanks to ESOPs of HCL.”

“It was not one job. There are several roles that I had played. Mostly the roles were either a start-up role or a transformational role within the same company. In 2008-09 I was almost leaving the company. Our CEO Vineet Nayar was a mentor for so many of us. He convinced me not to leave. He said whatever you want to do outside, you do it here. I am going to support you. He allowed me to start a new business unit. It was one of the high points in my career. This gave a new dimension to my career.

He said during those 17 years it was very difficult to dissociate personal and professional life. A Lot of his best friends are from his professional circle.

Asked how he coped with job pressure at HCL, Kamal said, Pressure was never an issue. You need real temperament for sales.” He also said “I was never a very ambitious person. I never thought of and hence never prepared myself to become a CEO.” Jokingly he mentions, “in a way, I was an “accidental CEO”!

Unravelling the story of his journey in Sify Technologies, Kamal said, “My joining Sify was an outcome of an informal interaction with Sify’s Chairman, Raju Vegesna to discuss about a large project which Sify had won. It was in the year 2012. “I felt it was a great opportunity to work with a very successful entrepreneur and also to be a part of his transformation vision around Sify.” I was excited to take up the role to lead the disruption in ICT which had started showing its’ early sign.

“My role in Sify is a combination of four roles. One is a role of a plumber where one fixes leak, second part of the role is about creation, creating opportunities that do not exist, third one is transformation and fourth part is driving growth.”

When I am thrown in challenging situation I do well. Even in my personal life I am the level III support guy. I got my sister, who was in Agartala, married almost single-handedly.” 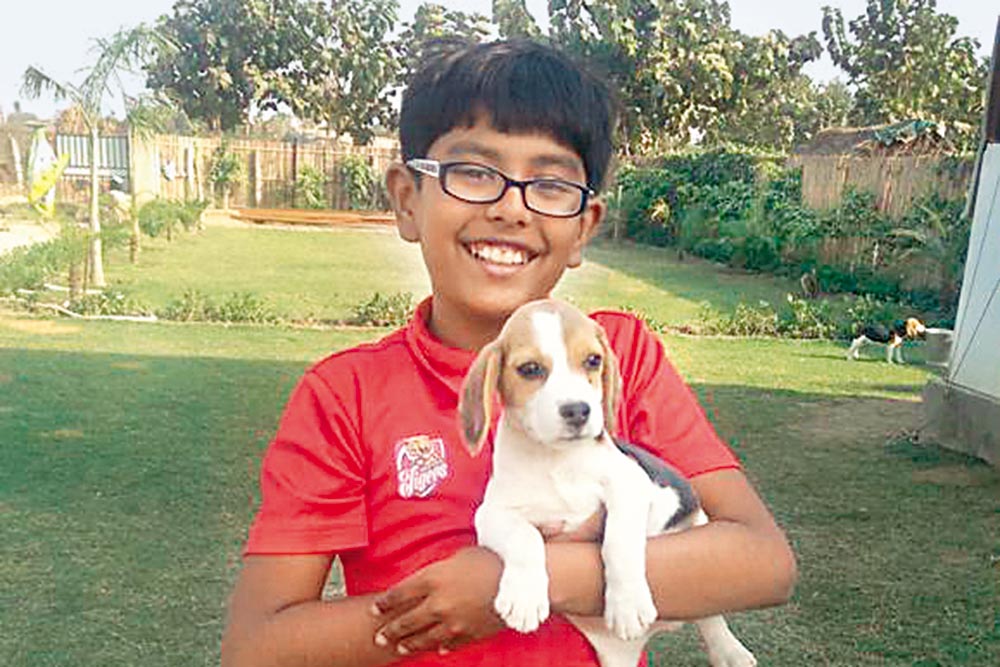 How does he cope with stress?

He said cycling or gyming are his stress busters. “I have a pet at home, a Beagle, named Diego. He is a great company and a stress buster.”

He also loves watching movies and during high school days he even bunked school to watch movies. “My favourite directors are Satyajit Ray, Hrishikesh Mukherjee and Raju Hirani.” He is a big fan of S D Burman, who also hails from Agartala.

“Even today given a chance I will play football.” Unlike many other top corporate heads, Kamal does not play golf. His gymming/ cycling time is mostly between 9pm-10pm as he laughingly says that he is a “night person”.

“In this kind of role you cannot take office out of yourself. You get guided by your customers’ business which mostly run 24*7”.

He is religious in his own way, but doesn’t follow many rituals.

He is a typical Bong in his food habit and his favourite dish is home cooked fish and rice. He loves his smoky single malts.

His wife Sulata and son Shaunak are his big pillars of strength while he manages his stressful life. 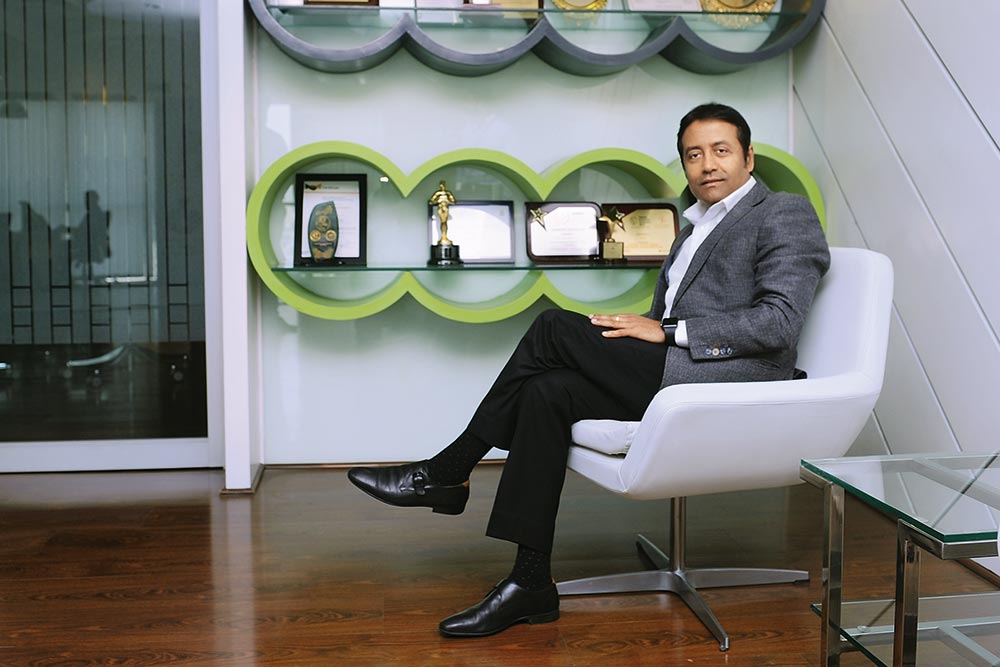 How is he steering Sify?

Sify Technologies is a Chennai-headquartered ICT services company listed on Nasdaq. The company, founded in 1995 has undergone multiple rounds of transformation from being India’s 1st Private ISP driving early adoption of internet and then transforming to a leading Managed Data Center & Network Service provider.

Kamal feels that the biggest challenge he faced after taking up his role at Sify was that of transforming people’s mind and integrating new joinees and existing employees, while the company was changing it’s course.

“We are very bullish about the growth prospects in India as the market has majorly shifted from the erstwhile Outsourcing/ Systems Integration model to Service Provider model. We continue to majorly invest in Infrastructure, services and skills to lead this shift in model.
The industry’s response to our model of service delivery following the principles of “less hardware, less people and less licenses” is very encouraging.

Our uniqueness lies in our ability to deliver digital services both in “consumption” and “build” model, complemented by our “business outcome- based” industry solutions.

“We have offices in the US, London, Singapore and Dubai. But at present 95% of our revenue are generated out of India business. Our investment in India is significant and I believe it will remain so in the near future too.” 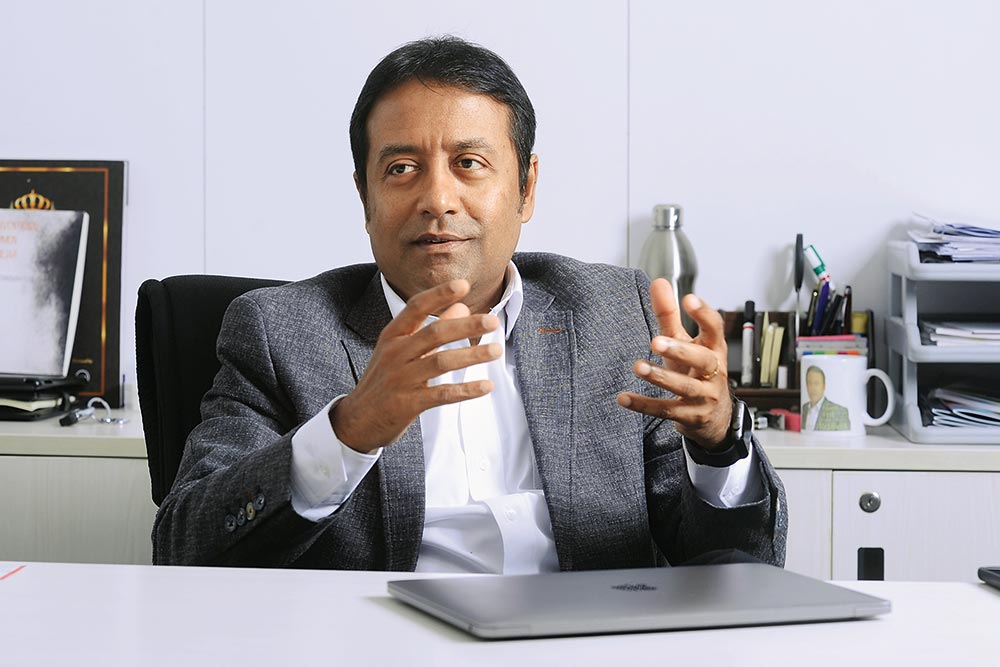 According to Kamal, there is no other company in India which having started as an ISP in mid 90s has survived and flourished through the multiple shifts in the industry, the way Sify has. Most of the other ISPs which were created during that era have either shut shop or merged with much bigger entities.

In 2006, Sify took a bold decision to completely move away from an established consumer services company into a 100% Enterprise focussed company. This has paid off very well for the company.

Sify’s journey in the last 6 years is a testimony of the company’s DNA of transformation led growth. Kamal says, “The biggest challenge for any company is to remain continuously relevant and strategic for clients in the midst of multiple disruptive shifts in the Industry.”

When asked about who are Sify’s competition, he laughed and responded “none or many, the way you look at it.” He explains, Individually each of our major business lines like Data Center, Cloud, Network Services, Managed Services, Security services, Apps services have multiple competition, but collectively, there is none.

Kamal has special mention of Sify’s Chairman Raju Vegesna’s vision and investment commitment for the company. Raju, being a successful technocrat turned entrepreneur based out of Silicon Valley, immensely contributes in guiding the company to be constantly tuned to the disruptive technology changes driving the Global IT & Communications industry.

Kamal’s future plans do not include retirement at any stage. He is too energetic to contemplate anything quiet. “I still have lots to do. My idea of fun is to drive new initiatives and transformation, not merely be a caretaker. So I don’t foresee retirement for myself,” he signs off.