I Called Vajpayee 'Face of BJP', Media Made It 'Mukhota': Govindacharya 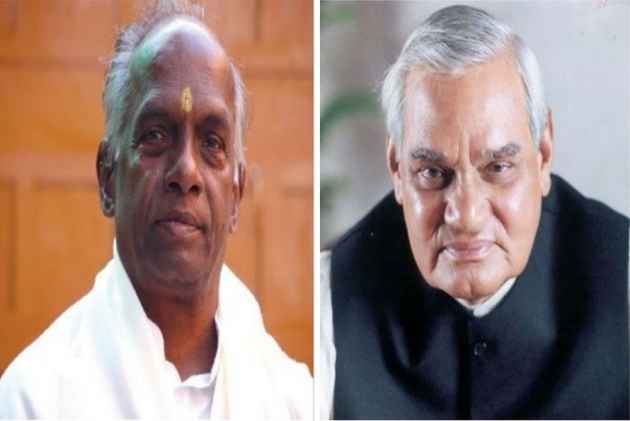 Former Prime Minister Atal Bihari Vajpayee, one of India's most charismatic leaders who led the nation through several crises and held together with a tenuous coalition with his inclusive politics, died in Delhi on Thursday. He was 93.

RSS ideologue K.N Govindacharya spoke to Outlook on BJP patriarch's demise he says, "Vajpayee and I have shared a father-son relationship."

Atal Behari Vajpayee and the RSS shared a close bond, that of a swayamsevak totally devoted to the Sangh. This is a fact he has himself reiterated many times. The Sangh, in turn, has immense respect for him as a political leader. For the RSS, Atal Behari was a swayamsevak who was into politics.

Vajpayee and I have shared a father-son relationship. His public life equals my age. When I was a kid, I got many opportunities to see him and listen to his speeches from a long distance. He was a leader who was sensitive towards public issues, that’s how I know him. As an RSS ideologue, I always respected his way of thinking, his way of dealing with a particular situation. The RSS also adopted Atalji’s thoughts and ideology.

I remember, during the Bihar assembly elections of 1967, Atalji and I had an in-depth conversation about his politics and RSS.  I was asked by the RSS to brief about the situation before the elections to Atalji. I told him that the time has come when the Sangh will have to strengthen itself to challenge the opposition. To this Atalji had told me, “Let the government be formed, time will say who will survive, who will stay and who will not”. At that time, I appreciated his political maturity. So, I told him that I accept what you are saying.

He was a master of politics of consensus, an absolute democrat. Atalji by nature was a moderate, he never appreciated any agitation, any violence. He always wanted the good health of the society but at the same time, he always wanted peaceful means to maintain this good health. He was always very particular about his language. To him, language was the weapon that he thought can spread hatred and can even tackle situations without creating any tension among the people. He had said that he believed in bhakti pradarshan’ and not ‘shakti pradarshan’.

|  Vajpayee ji always believed in teamwork and he understood
the pulse of people: K.N Govindacharya |

There was a time when I was misquoted by a section of the media, that I had called Atalji “the BJP’s mukhota” (mask). The issue was over when I clarified. But, then a senior reporter published the story again under the headline ‘Govindacharya calls Atalji mukhota of BJP’. Actually, what I said was, while answering a question about who is going to be the party president, I named someone else, I didn't mention Atalji’s name. To this, I was asked 'why not Atalji?’ This was during the 1996 elections. So I said, “Atalji is the most popular and most accepted face of the BJP party, and by projecting him the party will get majority in the elections.” A section of the media replaced the Hindi word ‘chehra’ (face) with ‘mukhota’, which changed the entire narrative.

I have always considered Atalji my physical instructor. And I respect him as my guru. There is no way a student can ever speak ill of his guru.

(As told to Satata Karmakar)