'I Am Capable Of Sinning Even Now'

On a lazy afternoon Bhupen Khakhar, artist and writer, reveals his true colours 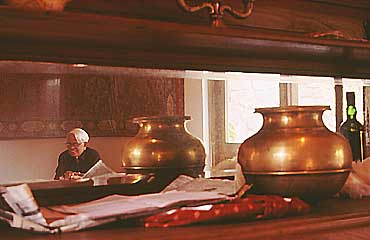 Some of the answers you may give may possibly be the same things you have been forced to say before … Do you mind a reiteration?

As you see I am growing old. And one tends to become repetitive with age. You run out of new ideas in which case you look for new ways of telling them. One of the primary reasons why I have turned to storytelling now is this.

Recently the world also began to read a Khakhar apart from going to see a Khakhar. Can you explain this new development?

I always had this urge to write. I may not have published before. But I have been working on fiction constantly. But till quite sometime I was more confident about my paintings. Hence I was in a position to show more of them to the world. Now I am confident about my writing too so the world is getting to see them now. The quality? I am not sure. Neither am I sure how effective my works of fiction would be. Only time will tell. But an important reason is my illness. I cannot stand and paint for long hours. So writing is less painful that way.

But you have always been a storyteller. The narrative has been the hallmark of your paintings…

True. But I encountered certain problems while telling some tales. I found my colours wanting in bringing out the correct expression of some of my thoughts. Some things are well depicted by my colours. Others were brought out successfully through words. Whether I was running them around in my mind or it was only a subtext of my thoughts or even when I was recounting something to my friends... So I realized that some themes, some ideas, some topics were best dealt with in sentences laid out by alphabets. So I always had an urge to write. Right from the beginning. That I initially responded to painting and stuck to it and pursued it very seriously is only coincidental.

So are you a painter first and writer later?

That would be a wrong way of seeing things. If you look at the chronology then yes, but literature has been a part of me from my childhood. Which came first, it is difficult to say. All the stories that I am now putting down on paper are ones that I have been working on since years. I did not have the courage or time to show them to the world earlier is a different matter altogether.

In the beginning you were ashamed of your sexuality. How did you overcome this?

When I was in Bombay I dared not talk about it or let it be known in the open. All this changed after my visit to England in 1979.

Do you plan to bring out your homosexuality in your fiction too? 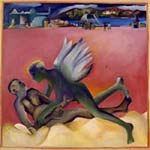 It may make a subtle, but in no terms insignificant, appearance. My strange sexual dilemma is made most explicit in Yayati, whose theme as you know is a myth from the Mahabharata. According to the mythology the king demands his son's youth instead of choosing to grow old and impotent. You may not find the references in my fiction to be as forceful as in the paintings.

Age has mellowed me down. And the rhetoric is always in high decibels when you are young and the conditions are constricted. Now I don't feel the need to be very vocal. But there would be some undertones in my stories too.

Yayati is about me. However, now I feel very elderly. I suffer from a loss of strength. And my illness has also contributed to this to a large extent.

Is it because you are scared now?

I have never been afraid of being immoral. I have sinned a lot. I am quite capable of sinning even now. But you know there is a limit to how much you can once you are old. There is no urge anymore to be adventurous. As I said earlier I have been humbled by time.

How aware are you of aging or how much does it trouble you?

At first I thought for sometime that that my sex life was over. Then I realized that it does not matter at all. It did when I had embarked on works such as Yayati. It was vital because a response of another person is crucial to arousing... You would know that I was planning to call it The Touch. The caresses of young men. Old men derive vitality from that.**

You have also commented very wryly on the society in your art. What about your stories?

You will find the answer to that in Phoren Soap. Even Jasbai mukhun (The murder of Jasbhai) is no different. Though I am dealing with murder the idea is to lay threadbare a few things that I have been annoyed by since my formative days as a creative person in Bombay. Though much of what I have written in latter works has been inspired by incidents in an around Baroda you may find images of the early Bombay background… The one made famous by Rushdie…

Right. If you look closely at my paintings you will find that my method has been one adopted to bring together everyone with whom I had relations with. People whom I remember... I was not as sexually active then as I was, but memories linger.... You may recall that Vallavbhai was a permanent fixture (a retired building contractor whom he first met in 1965). My days in Bombay are the centerpiece of my recollections. Much of what I am, began from there and revolved around my experiences from there.

Would your stories also be as acerbic in their humour as your paintings are?

Yes. I can speak only one language. The language I have learnt. Whether I paint or write, it is the same language. My earlier stories have been in that language. What amuses me most when I write is recounting the funny ways in which the society tries to hide its lies.

And vulgarity? That is a term many of your critics have associated with you works…

As far as vulgarity in my works is concerned I am loud. But I am much more concerned with other aspects like warmth and vulnerability. You can accept it or you can ignore it. At my age I think I am above all that. I won't be curtailed by the boundaries drawn by the society.

What colour is this language? Is it the same bright pink and violet?

It is mostly white. My paintings have been garish as I draw heavily from calendar art. And later when I changed my style the colours remained. It is always the same radiant ones. But the statements I am now intending to make are in black and white. Take it in whatever sense you will…I have also worked on a sequence of a science-fiction drawings. So I may try a hand at science fiction too. Who knows?

Would your writings have similar references to Indian mythology?

Not yet. But my mind is always scheming something so it is difficult to say that I may not fall back on mythology to further my narrative.

In most of your paintings especially in You Can't Please All  and Two Men in Banares, the way the figures relate within the image is purposely homosexual… 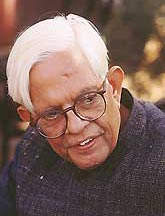 When I began exhibiting I found myself speaking for a class and a world uncared for. I could not find a mention of it anywhere. The most striking change was that my art became explicitly confessional, and as often as not, including a self-portrayal - sometimes approaching life-size. I have been engaging in a constant dialogue with myself. Putting myself contextually with the world. Both in my paintings and my fiction I am concerned by the immediacy of the impact they have on the audience.

I have always wondered how you chose between watercolours and oil. Does the theme you work on play a part in deciding that or is it serendipitous?

Sometimes I am driven by the urgency to paint. Then I resort to watercolours because they are done quickly and with speed. Sometimes I deliberately choose watercolours because I know they would come out well if done at great speed. But it is difficult to define my actions or seeking the reasons behind them. Especially after my illness and my operations. I have been choosing my medium according to the energy that I have conserved in me and my ability using that energy to sustain the desired quality in the work I am engaged in.

What about dealing with sexual themes overtly?

My sexual encounters were for much of my life with men of my own age or younger, met by chance, perhaps on a single occasion. It is an episode of this kind that I record in the large canvas. I feel these relationships are compulsive and obsessional. They are gentle and affectionate laden with sympathy.

How have your images dealt with your sexuality?

It is in one way or another, fantasy. With old people, whose sexual capacity has withered, fantasy plays a greater role. But my pleasure in painting has been perverse. The act of painting turned into the act of making love. People termed them vulgar and I was ostracised. The critics and the society hounded me. But vulgarity is my vocabulary to express lovemaking.

Should one distinguish between your literary works and your jocular homosexual takes as in In a Boat?

If you look at the etchings I did for my book and the illustrations that I do for my story then you will see that my approach as before is humorous. It will remain so. I cannot change that. 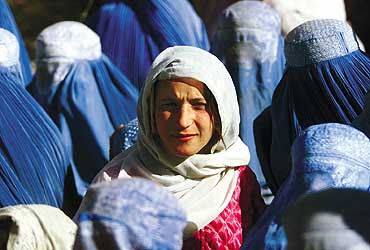 Which means you will never get angry?

Not anymore. I don't think so. But human nature is unpredictable. Have you ever heard of an angry old man?

**(Timothy Hyman who has written Khakhar's biography gave a perfect explanation: 'The image turns out to be not so easily reducible; it may embody the gift of youth to age but also the artist's own awareness of aging'.)