Why is it that the Muslims only raise a hue and cry when the perpetrators of violence happen to be America or Israel but choose to look the other way when Muslim regimes do the same? 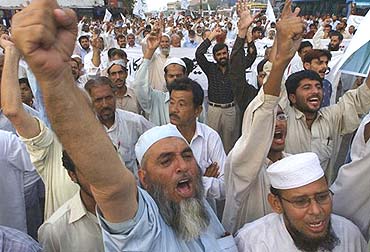 The on going genocide of non-Arab Darfurians by the state backed Arab militias called janjaweeds have left nearly 2,00,000 people dead and more than a million homeless. Almost all the dead and refugees are Muslims. This brutal ethnic killing has been going on for more than three years now. And yet, it is shameful that the Muslim world has remained silent on the issue. While the Muslims legitimately raise issues of torture and killing in Guantanamo, Iraq and Palestine, it is hypocritical of them to remain mute spectators to the killings in Darfur. Why is it that the Muslims only raise a hue and cry when the perpetrators of violence happen to be America or Israel but choose to look the other way when Muslim regimes do the same?

If the Arab press and Muslim internet groups are to be believed, what is happening in Darfur is not genocide at all. Rather it is just a law and order problem within Sudan which should be treated as the ‘internal’ matter of the Muslim community. Like the revisionist historians of Holocaust, they put the numbers of dead in Darfur to be only in few hundreds — and, of course, those displaced, they claim, have ‘chosen’ to do so out of their own will.

But more disturbingly perhaps Muslims blame the Jews for making Darfur into an international crisis. According to this reasoning, Jews are at the forefront to campaign against the ‘Islamic’ government of Sudan with the intention to malign Islam and Muslims. Any discussion on Darfur therefore will help the Jews in their objective and so Muslims should remain silent on the issue. Such anti-Jewish ideas travel a great length in the Muslim world. Even in India, where Muslim organizations and mosques repeatedly condemn America and Israel over the question of Palestine, it is shameful that they haven’t spoken against the killing of innocent Muslims in Darfur. It is sheer hypocrisy that the Indian Muslim leadership mobilizes lakhs of Muslims against Bush’s visit, but willfully ignores state sponsored killing of their own brethren.

It is true that partly, the crisis in Darfur has much to do with meager land resources. The Arab janjaweed are mostly comprised of pastoral tribes who want to usurp the land of ethnic Darfurians. The conflict escalated when the mainly black Darfurians took up arms under the leadership of Sudan Liberation Army in February 2004. In retaliation the Sudanese government armed the janjaweed who fought along with the regular Sudanese army to crush the legitimate demand of the Darfurians.

However, it will be too restrictive to understand the crisis as a conflict over economic resources alone. As sections of Muslims are becoming painfully aware, race is an important element in the whole conflict. The Sudanese government, aided by certain ‘Islamic’ regimes, has embarked on a wholesale program of ‘Arabization’, which privileges peoples and cultures of Arab descent over non-Arab tribes. No wonder then that the janjaweed, mainly composed of Arab tribes has the support of the Sudanese government. And in this unequal contest, it is the non-Arab and black Darfurians who are being killed everyday while the government in Khartoum cries ‘Islam in danger’ at any attempt to corner it over the killing, rape and plunder of its own population.

The Arab governments as well as Muslim religious organizations across the globe, which cry hoarse on American aggression on Iraq, have not only remained silent, rather, by raising the specter of the ‘Jewish hand’ they have actively sought to subvert the issue. Muslims, particularly black Muslims are asking whether the lives of Palestinian, Iraqi or Bosnian Muslims are more important than the lives of black Darfurians. Islamic government and religious leaders, who proudly tell the world that there is no racial discrimination in Islam, must then explain their reluctance to even condemn the mass murder in Darfur, let alone finding a solution to the problem. 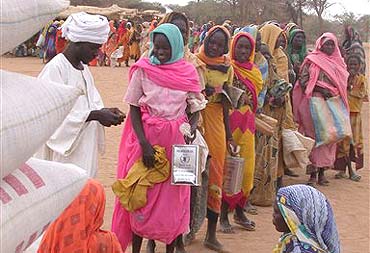 In fact, even from a purely humanitarian angle, their efforts are disgustingly inadequate. Canada alone has given more aid to Darfur than all the Arab countries put together. The Arab League has consistently supported the government at Khartoum and even rejected the sanctions imposed on Sudan in 2004. Emboldened by such show of Islamic solidarity, the Sudanese government called the Darfurians ‘thieves and robbers’ and unleashed unprecedented repression on them.

While it is within the democratic right of Muslims to protest against the American or Israeli aggression, but this spirit would remain hollow, hypocritical and unjust if it does not encapsulate a similar protest against those Muslim regimes which deny basic human security and freedom to its own citizens. Rather than blaming others all the time, Muslims would do much better to introspect the rot within. And if Muslims are really serious, then Darfur can become the starting point to talk about what is horribly wrong within their own societies.

It would be foolhardy to expect Muslim religious organizations, especially those in developing countries, to raise this issue, as they are heavily dependent on Arab funds. It is the common lay Muslims, who should rise and protest against the ongoing genocide in Darfur. Such a protest will also expose the complicitious silence of the Muslim leadership on the issue.

Arshad Alam is with the Center for Jawaharlal Nehru Studies, Jamia Milia University