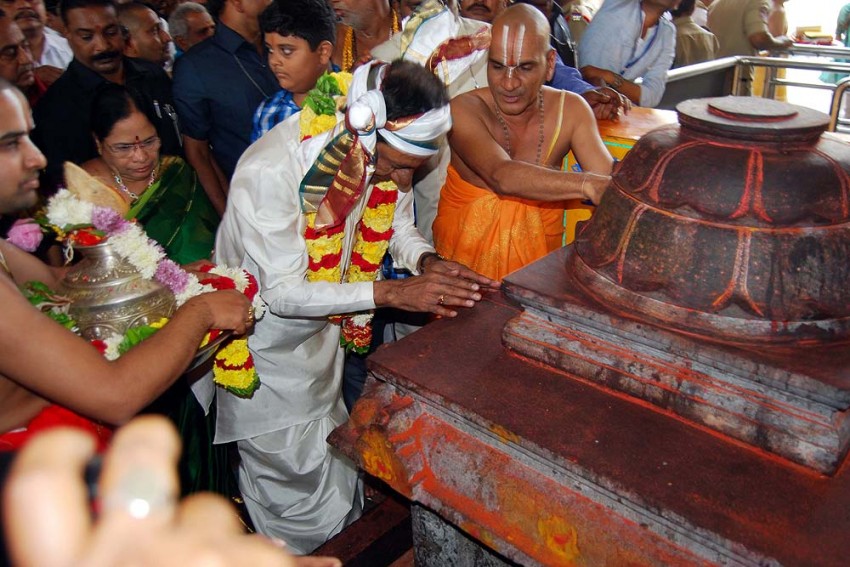 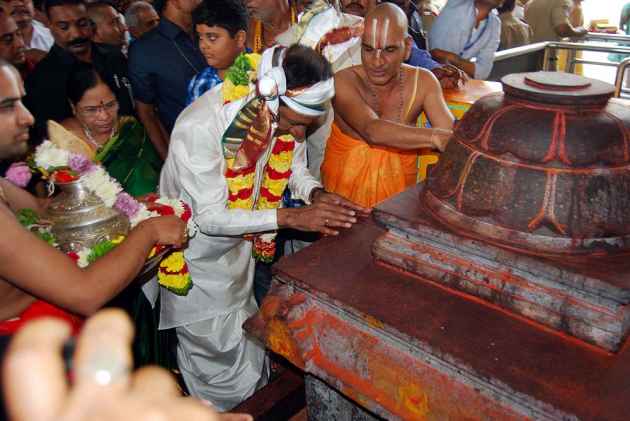 Telangana Chief Minister K Chandrasekhar Rao, who has an affinity for Chandi yagams, and is about to conduct his sixth yagam from December 23-27, recently performed a bhoomipuja as a run-up to the main event. KCR and wife Sobha participated in the bhoomipuja at their farmhouse in Erravalli in Medak district. A large number of priests are required for the yagam. KCR had said recently that 4,000 purohits and 1,500 ritviks are required for performing the yagam. The CM has sought to make it clear that he will not use government money for the yagam. Instead, he will bear the expense on his own and use funds from donors. KCR has also invited Prime Minister Narendra Modi and President Pranab Mukherjee for the yagam which he says he is conducting as a thanksgiving exercise for Telangana State.

In September this year, a division bench of the Hyderabad High Court directed the State governments of both Telangana and Andhra Pradesh to find out the root cause of distress among farmers. Dealing with a PIL, the bench consisting of Acting Chief Justice Dilip B Bhosale and Justice S V Bhatt observed, "We feel that the welfare schemes of the governments are not reaching farmers." It asked both the governments to take visionary steps to prevent farmers' suicides. The PIL was filed by Vyavasaya Jana Chaitanya Samiti. A few days back, the counsel representing the Telangana government told the HC that the petitioner's claim that 1,347 farmers had committed suicide, was false. The icing on the cake, however, is that among the many reasons cited, the Telangana government said that huge debts incurred by farmers from lavish expenses on marriages and educating children in private schools led to suicides.

Among the other reasons given were, crop failure for two consecutive years, indiscriminate digging of borewells, family disputes, prolonged illnesses, burden of private loans for visiting Gulf countries for employment and high interest rates on loans from private moneylenders.

Andhra Pradesh Chief Minister Chandrababu Naidu recently visited the Hyderabad Secretariat after 82 days. As Naidu stepped into the L Block, several ministers, Telugu Desam leaders and Secretariat employees lined up to meet him. Naidu has issued directions that all Andhra employees will have to shift to Vijayawada by June, 2016. He addressed a review meeting of 12 key departments and developmental works. The CM stated that he would be spending one or two days in Hyderabad every week to spend time with his family and review Telugu Desam party activities. The TRS, in the meantime, is not taking this too kindly. It feels that Naidu has an eye on the Greater Hyderabad Municipal Elections to be held in January, 2016. In fact, many TRS leaders are again raking up the cash-for-vote scandal in which Naidu faces an Anti-Corruption Bureau probe. The ties between Naidu and KCR appeared warmer after the latter's visit to the Amaravati capital foundation ceremony on October 22. While Hyderabad is a common capital for Telangana and AP, KCR has always made it clear that he sees Naidu as a guest who should keep his visits to Hyderabad few and far between. 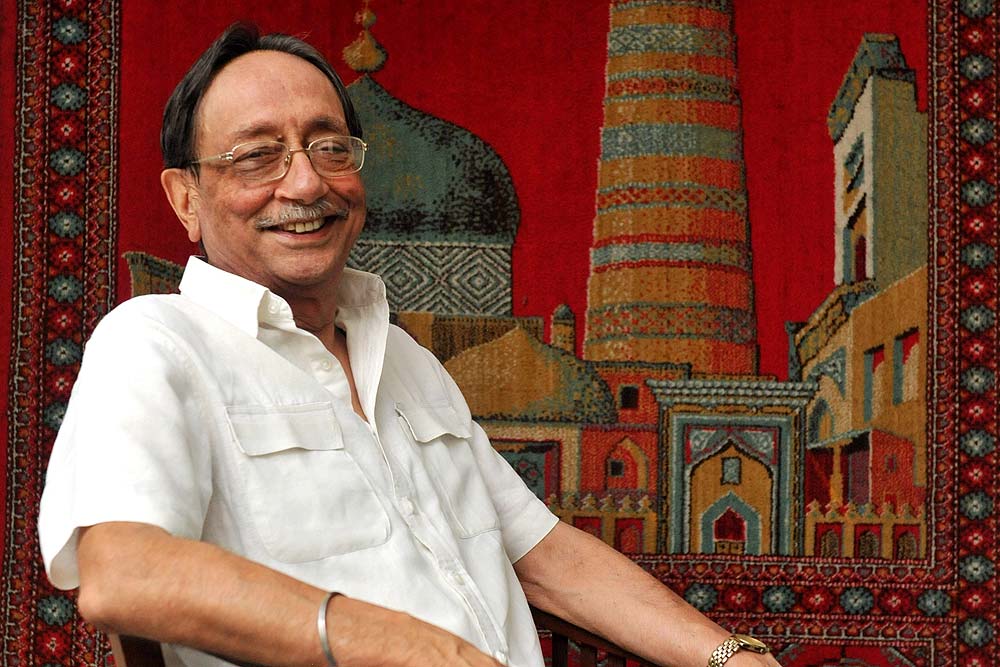 Tales from the Vajpayee years?

Amarjit Singh Dulat, former chief of the Research and Analysis wing (RAW), and author of Kashmir: The Vajpayee Years, was in the city recently for the 50th reunion at the National Police Academy. Dulat may be 74 years old but is sharp as ever when it comes talking about his experiences as RAW chief during the difficult years of the Rubayya Sayeed kidnapping and the Kandahar IC-814 hijack. Dulat was part of two events at Taj Krishna and Saptaparni in Hyderabad where he spoke about his experiences in the Valley when Atal Behari Vajpayee was prime minister. Most times, his tone while talking about Vajpayee, is full of adulation while he categorically states that Narendra Modi had a great opportunity to bring about changes in Kashmir which he wasted. "Whatever Modi had to do should have been done in the first 18 months. But as anyone can see, Modi has done little or nothing," feels Dulat.

Asked to talk about similarities and differences between RAW and Pakistan's Intelligence Agency ISI, Dulat states clearly, "India is not in the business of killing." Dulat recollects how Vajpayee got Advani to propose the Agra summit. "Advani held about 20 secret meetings with Pakistan High Commissioner Ashraf Jehangir Qazi to lay ground for the historic two-day summit between India and Pakistan at Agra from July 14-16, 2001. But talks broke down as Pakistan made the tactical error of putting all its eggs in the Vajpayee basket," Dulat says explaining the Agra debacle. "As soon as Pakistan President, General Pervez Musharraf landed in New Delhi, Advani who met him, asked, "Pakistan must hand over Dawood Ibrahim". Musharraf said, pehle Agra toh pahunch jaayein. The chemistry was just not good and Advani felt left out. Top officials felt that the Advani of Delhi was different from the Advani of Agra."

Dulat says that while talking to officials or people from other parts of India, "Kashmiris are not very trusting and don't tell the truth because they feel they are being lied to. I don't think we've understood Kashmir at all. It will take us at least 10 lifetimes to understand Kashmir."

On the Rubayya Sayeed kidnapping when her father Mufti Mohammed Sayeed was Union Home Minister, Dulat says it was a classic case of how not to deal with a hostage situation. “The target was actually then J&K Chief Minister Farooq Abdullah’s daughter. But Farooq lived in a high security zone and Rubayya’s whose movements were tracked, was easy picking. Though it was an amateurish kidnap, everyone who knew Muftisaab wanted to get into the act and the result was thus.”

?The importance of Farooq Abdullah
?
Dulat says that while P V Narasimha Rao and A B Vajpayee were both intelligent politicians, Vajpayee was more popular in Kashmir because he used better words. “It was often said that if Vajpayee were to contest from Srinagar, he would get elected unopposed. Kashmiris were excited when Modi was elected but Modiji has wasted that opportunity.”

As then Army chief General Padmanabhan stated in 2002 quite accurately, “The Army has done its job. It is now up to the politicians.”

Dulat insists that the Pakistani story in Kashmir is long over. “Today when we see ISIS flags in Kashmir, it does not mean there is Pakistan’s involvement but that there is an increasing level of frustration among Kashmiris.”