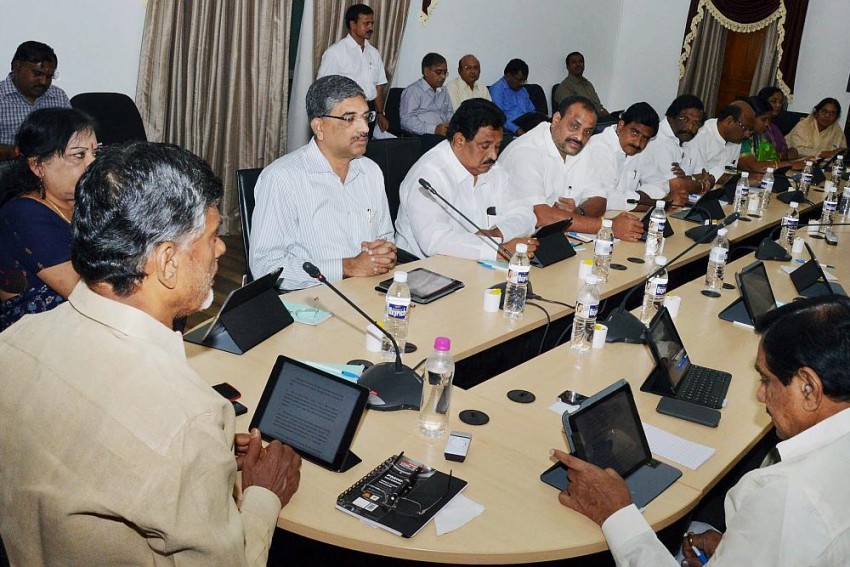 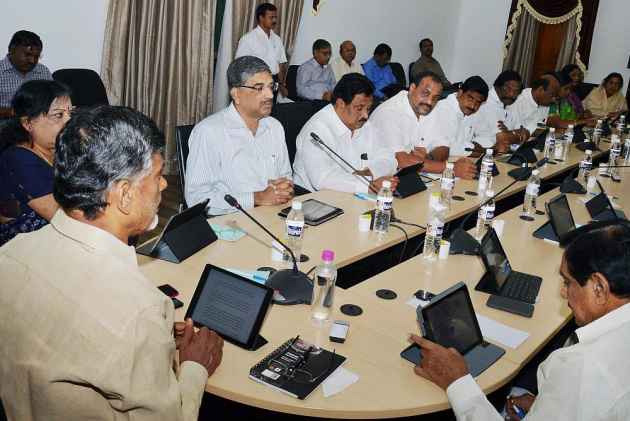 Andhra Pradesh Chief Minister Chandrababu Naidu who has been selling dreams of a Singapore-like capital to the state's citizens has suddenly found a model closer home. After a visit to Chhattisgarh, Naidu is full of praise for the state's initiatives in building Naya Raipur as its new capital. The CM has now stated that he is considering land pooling model that was followed in Naya Raipur. Farmers in Chhattisgarh were given 40% of the developed land in lieu of the real estate they had parted with. Naidu in fact requested his Chhattisgarh counterpart Raman Singh to constitute a joint working group on developing a capital. He was full of praise for Raman Singh terming him a pro-poor CM who was successful in implementing the PDS without any flaws. Naidu was accompanied by a large contingent of ministers, businessmen and officials. The AP CM said that he wanted to improve air, rail and road connectivity between the two states.

Telangana Chief Minister K Chandrasekhar Rao has come up with a fresh solution to protect women travelling in buses. He has asked officials to install grills in all buses to divide men and women. The Telangana government has instituted a committee on women's safety which has made 77 suggestions. KCR is firm that that some of the violent crimes against women that have taken place in the past will be prevented. He has directed that every office should have a women's grievance cell. Apart from this, all private and government offices should have separate lunch rooms and toilets for women, he has instructed. Citing the example of Singapore, KCR who is still dazzled after a visit to the country, wished that women in Telangana too could move around as freely as they did in Singapore.

While KCR speaks of respect for women and their safety, in Andhra Pradesh, the Assembly Speaker Kodela Sivaprasad Rao has been accused by his daughter-in-law of harassment and kidnap. Padma Priya, a resident of Visakhapatnam, is the estranged wife of Kodela's son, Sivaramakrishna. She has filed a police complaint that her husband barged into her parents' home with some goons and two policemen and kidnapped their four-year-old son Gowtham. A teary-eyed Padma Priya held a press meet in Vizag stating that the police were deliberately acting slowly on her complaint because her father-in-law is the Assembly Speaker. Padma Priya alleges that false cases were being filed against her parents under the SC/STs Atrocities Act. Padma Priya married Kodela Sivaramakrishna in 2009 and has been living apart from her husband over the last one year because of problems with her husband and in-laws. Isn't it time Chandrababu Naidu looked into the issue and ensured that the young mother gets justice?

The Hyderabad High Court has taken the Telangana government to task for saying that it will extend the Financial Assistance to Students of Telangana (FAST) scheme only to those youth whose parents were residents of Telangana on November 1, 1956. The HC bench termed the move as anti-integrationist and unconstitutional. A division bench comprising Chief Justice Kalyan Jyoti Sengupta and P V Sanjay Kumar asked the Telangana government not to finalise any modalities before placing the guidelines before the court. A petition was filed in the matter by former ministers in undivided Andhra Pradesh, Pithani Satyanarayana and Dokka Manikya Varaprasad Rao. The former ministers contended in their petition that the November 1, 1956 rule was against the Presidential order which governed education and state employment. "If we allow this GO, it will result in a secessionist and anti-integrationist Act. We shall strive to protect the integrity of this country," the Chief Justice said.

Wrong Side of the Law

The same division bench also stayed another Telangana government GO for re-registration of all vehicles, replacing the existing AP series with TS (Telangana State) ones. The HC bench said it would not allow power to be used in a whimsical manner. A petition was filed by J Rammohan Chowdary, a bike owner in Hyderabad. He challenged the Telangana government's GO on the matter, dated June 17, 2014. A furious Chief Justice gave some lessons on governance to the state counsel. CJ Sengupta said, “The government means it should be people-friendly. People means not Telangana people alone. Whoever comes here and lives here, they are all the people of this state. You will not be permitted to do things that are not permitted by law.”

A fuming Chief Justice Sengupta went on to add, “Just because you have the power, don’t be under the impression that you can do anything and everything under the sun. You have to justify your actions. You cannot use the power given by the people in a whimsical manner. Why should people go and stand in long rows to get their registered vehicles re-registered. Why are you harassing them like this," the CJ asked.

Looks the KCR is getting on the wrong side of the law a bit sooner than expected.

Most of us have had our own set of experiences with ATM machines which sometimes gobble our cards, throw up torn notes or deduct money from our accounts without coughing up the money. And sometimes, it even opens on its own, revealing all the cash inside like a khul jaa sim sim. Well not for everyone. But three young men in Sanjeeva Reddy Nagar who stepped into a State Bank of Hyderabad ATM witnessed this unique phenomenon. Shaik Lateef, accompanied by his friends, Prasad and Hari inserted his ATM into the machine and pressed to withdraw Rs 200. He was shocked when the machine's door opened and currency worth Rs 1.5 lakh rolled out. When the bundles of money fell at their feet, the friends immediately alerted the police by dialling 100. The Sanjeeva Reddy Nagar police team which rushed to the spot found that the machine contained another Rs 24 lakh. There was no CCTV inside the ATM nor was there a security guard. Both the bank authorities and Police Commissioner Mahender Reddy gave the youth a cash reward and a certificate of honesty.

What is the best way to keep a tab on ministers? Appoint some tails in their offices and give them designation of liaison officers. This is precisely what Lokesh Naidu, son of Chandrababu Naidu is doing. The Andhra Pradesh Chief Minister recently signed a file appointing 30 Media Liaison Officers. Of them, 19 will work in ministers' offices, five in the CMO and the remaining will be posted in the AP government's magazine Andhra Pradesh. Telugu Desam sources say that these media officers were handpicked by Lokesh and they worked as analysts in the general elections. They will be paid a salary of Rs 25,000 a month. These media officers will submit reports periodically about the functioning of various ministries. Seniors feel that this is a typical move by "control freak Naidu" who likes to keep his ministers under close scrutiny.

No, Lordships, You Erred