The astrologer friends of most politicians predicted that filing nominations on April 9, Wednesday, especially between 2.30 pm and 4.30 pm would ensure victory for sure. 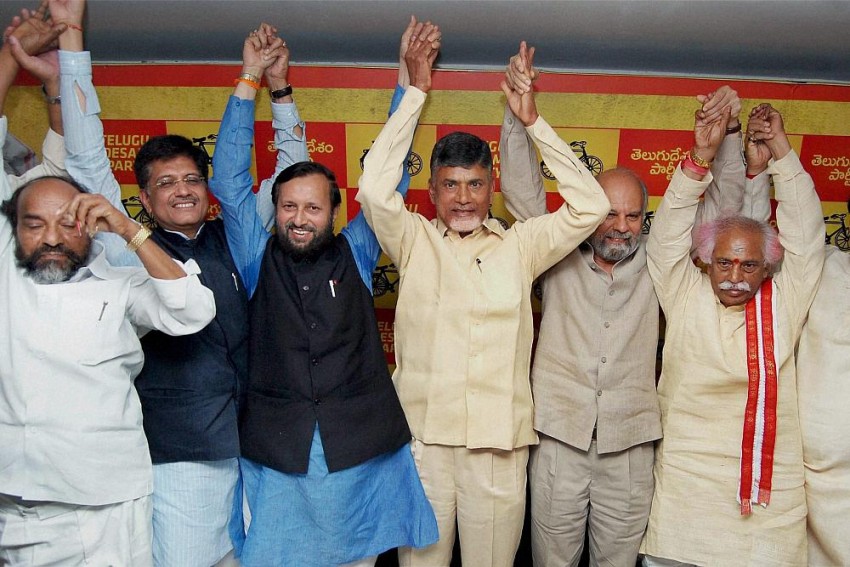 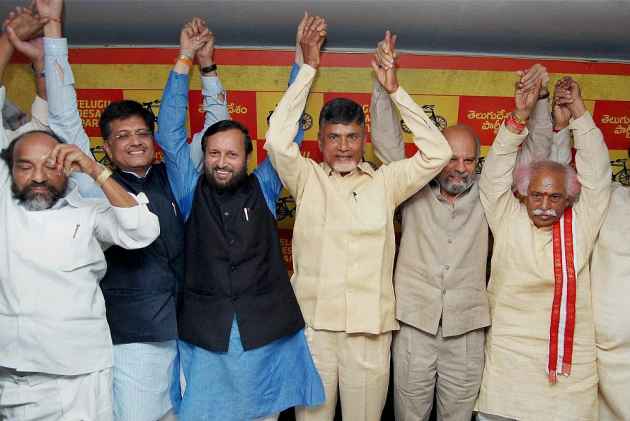 Telugu Desam chief Chandrababu Naidu seems to have bitten off more than he can chew following the official declaration of an alliance with the Bharatiya Janata Party. There has been major unrest in the rank and file of the TDP in Telangana and in Seemandhra alike, the protests arising from ticket aspirants. Violent protests outside Naidu's residence are surely keeping him on tenterhooks. If party hoppers are not giving him high blood pressure, this sudden uprising within the party is sure to. In Mahabubnagar district, some TDP activists set fire to furniture at the party office when they heard that the Kollapur seat was being given to the BJP as part of the alliance. BJP too has been faced with similar "fiery" protests. When party workers are not in a destructive mode, they are attempting self-immolation. In fact, Telangana BJP president Kishen Reddy, who has been sulking over the TDP-BJP alliance, did not release his own name in the first nominees list. He later on issued his name in the second list and said he will be contesting from the Amberpet Assembly segment against the Congress senior V Hanumantha Rao.

Another prominent TDP leader Revanth Reddy who was expecting a Lok Sabha nomination from the Malkajgiri Lok Sabha was disappointed when Naidu chose to retain him in the Kodangal Assembly seat instead. Telugu Desam activists from Secunderabad, Malakpet, Shadnagar, Bahadurpura and Malkajgiri staged frenzied protests near Naidu's residence demanding that their leaders be given tickets. Malkajgiri LS which falls in the Greater Hyderabad Municipal limits is much in demand. We have Lok Satta leader Jayaprakash Narayan and former Director General of Police Dinesh Reddy (YSR Congress) also contesting from the same seat. The TDP candidate for Malkajgiri LS is Nalla Malla Reddy, owner of the Malla Reddy group of educational institutions.

While in Seemandhra, the Congress was finding it difficult to find candidates, in Telangana, it is also facing furious protests from aspirants who were denied tickets. Incidents of activists storming into the party office or leaders' residences are becoming common. Blame it on the rising summer temperatures or poll heat, tempers are surely running high in this election.

Has the Telangana Rashtra Samiti reached a silent understanding with the Congress? The Congress, which was to pit actress Vijayashanti, against TRS supremo K Chandrasekhar Rao in the Medak Lok Sabha has shifted her to Medak Assembly. KCR will also be contesting from the Gajwel Assembly seat. Vijayashanti quit the TRS in a huff after an ego clash with KCR and joined the Congress. She had been going around telling one and all that she was more than ready to take on KCR. But in a surprise move, the Congress high command assigned her an Assembly ticket in Medak. Vijayashanti has been putting up a brave front and saying that since Telangana is a new State, the party needs her to represent its interests at the local level in the State Assembly.

KCR's daughter Kavitha is contesting from the Nizamabad Lok Sabha seat where she will face sitting Congress MP Madhu Yashki Goud and the BJP's Y Lakshminarayana. Neither of the two leaders is weak and Kavitha has a tough contest on her hands. But Kavitha who had to make way for her brother in politics since 2004, sees it as a great chance to prove her mettle and represent her party's interests in Parliament.

Gemologists, psephologists, astropsychologists, numerologists and nadi astrologers are in high demand these days. Politicians are rushing to them to consult them about their political future, which gems to wear, which party to approach and which ticket to seek so as to ensure maximum success. Lucky dates, lucky stones and rituals to appease the Gods are precious knowledge.

Not to be left behind, Feng Shui, coffee cup and rune readers are also taking on political clients who are looking for a smooth electoral road ahead. Hyderabadis also complain that most prominent temples are flooded with politicians and their bodyguards these days because practically every leader is seeking divine intervention for victory at the hustings.

April 9, 2014 was the final day for filing nominations in Telangana and also an auspicious day according to the Hindu calendar. The astrologer friends of most politicians predicted that filing nominations on April 9, Wednesday, especially between 2.30 pm and 4.30 pm would ensure victory for sure. The ensuing rush in constituencies across Telangana was phenomenal. Returning officers too, it seems, were well aware of the importance of the April 9 simha lagnam (2.30-4.30 pm)

If there's one man who loves stirring up a controversy, it is director Ram Gopal Varma. Having tweeted extensively on Pawan Kalyan's Jana Sena Party, the filmmaker then moved on to reading Pawan Kalyan's book Ism. According to RGV, the book is totally blah and explains no philosophy whatsoever. RGV then goes on to add that Raju Ravi Tej, who Pawan Kalyan has co-authored the book with, has slapped together ideologies of great philosophers such as Immanuel Kant, Arthur Schopenhauer, Ayn Rand and Karl Marx in a hurried manner. RGV says he himself of course finished reading the works of all these great authors when he was studying engineering while Pawan Kalyan may not have had the time to finish even one book by them.

Ramu might have a point after all. This correspondent too went through the book. And if there is one thing I can say, it is this. Ism has a kind of soporific effect induced only by History & Civics textbooks in school. Here's a sampler in case some readers going through this column are having trouble sleeping.

"In an ego-driven society seeped in the instinct to self-preservation, laws are merely a showpiece for powerful people to thrust onto powerless people. In truth, the State belongs not to the general public but to a few particular people. The State exists not for all people but for a few particular people. They rule all and ruin all. But they themselves are safe, rich, progressing and prospering. This is the truth of our ideal-less society, ruling by cunning and clever politicians and profit-making businessmen."

Well Ram Gopal Varma might know his books, his movies are another story altogether. His recent film Rowdy starring senior actors Mohan Babu, Jayasudha and Manchu Vishnu (Mohan Babu's son) was supposedly a take on Godfather. But anyone who's seen the film will beg to differ— loudly. What is amazing about the film is that RGV shot it in 30 days and reportedly made it on a shoestring budget of Rs 2 crore. He uses a three-camera setup and sync sound. But the effect is jarring on the nerves, a bit like watching a Doordarshan tele-film in the 80s. For those who are interested, Rowdy is yet another faction film based in the Rayalaseema region. The ganglord father, the two sons, the tale of murder and revenge is all too similar. For the record though, RGV seems to have shot the entire movie in Ramoji Film City. RGV claims the movie is a hit and has already made well over Rs 12 crore.

Wrestling With The Snake