YSR Congress chief Jagan Mohan Reddy recently visited the Lord Venkateswara temple with 60 of his followers but refused to sign a formal declaration form, which is a must for non-Hindus...

Andhra Pradesh Chief Minister Kiran Kumar Reddy seems to be indirectly admitting that some of his cabinet colleagues have no work. Fed up with the constant barbs of health minister D. L. Ravindra Reddy who recently called the CM a "Jagan man", Kiran Kumar hit out against the prodigal minister. Kiran Kumar said the minister's comments are meaningless and need not be taken seriously. Ravindra Reddy has often carried his complaints against Kiran Kumar's style of functioning to the Congress high command. Asked to react, Kiran Kumar lashed out at reporters saying his health minister had no constructive work to do apart from criticising others. He also rapped the media saying it had no work other than publicising such statements. It is expected that Kiran Kumar will be carrying a litany of complaints against his cabinet colleague to AICC general secretary Ghulam Nabi Azad soon. But the Congress is in no mood to sack any more ministers till the byelections scheduled for June 12 are over. So Kiran Kumar has no option but to put up with the loose cannon minister. Meanwhile, law minister Erasu Pratap Reddy asked Ravindra Reddy to quit his ministerial berth before making any adverse remarks against the CM. Not to be bogged down, Ravindra Reddy said he would not react to the law minister's demand because he was a "half-man, half-woman". 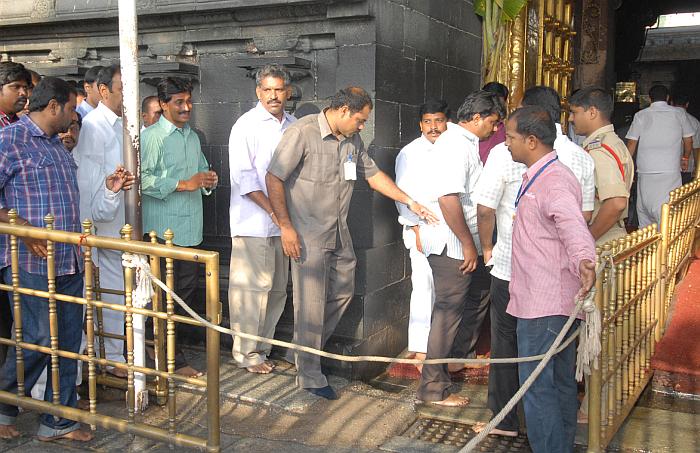 The holy abode of Tirumala seems to be a ripe spot for controversies. YSR Congress chief Jagan Mohan Reddy recently visited the Lord Venkateswara temple with 60 of his followers but refused to sign a formal declaration form, which is a must for non-Hindus. The Tirumala Tirupati Devasthanams board stipulates that non-Hindus who enter the temple must sign a form saying that they believe in Lord Venkateswara. Jagan, who is a Christian, reportedly defied the authorities saying he not signed any form when he visited Tirumala with his father, the late Y. S. Rajasekhar Reddy, in 2009. What the TTD authorities found even more embarrassing was YSR Congress supporters raising "Jai Jagan" slogans at the main entrance of the temple. Devotees who enter the temple are meant to practice humility and raise chants only in the Lord's name, say officials. Telugu Desam and Congress leaders say Jagan's attitude smacks of arrogance and disrespect for Hindu sentiments. Besides, most VIPs are allowed to take along only 10 members along with them during darshan. Jagan's army of 60 supporters is another violation say politicians. Jagan was in Tirupati to campaign for the forthcoming Assembly bypoll. Karunakar Reddy is the YSR Congress candidate for the election. The TD and Congress are most likely to turn Jagan's visit into a bypoll issue.

The chief priest of Tirumala, Ramana Deekshitulu, also courted controversy when he called on industrialist Mukesh Ambani's son at the Krishna Guest House. Ambani's son Anant, accompanied by some of his family members, had a darshan at the temple before going to the guest house. Ramana Deekshitulu sped away from the guest house in his car as TV cameras tried to get some bytes out of him. The Ambanis are regular visitors at the Lord Venkateswara temple. Deekshitulu has earlier been served memos by former TTD Executive Officer IYR Krishna Rao for calling on VIPs at their guest houses. A TTD rule states that priests are meant to be at the service of the Lord alone and must not pay private visits to the VIPs.

Professor G. Haragopal, one of the mediators who negotiated Sukma Collector Alex Paul Menon's release, is not too happy with the Chhattisgarh government's attitude. Haragopal who earlier negotiated the Malkangiri Collector Vineel Krishna's release in Orissa says Raman Singh did not display the same kind of anxiety as his Orissa counterpart Naveen Patnaik. Haragopal complains that he and B. D. Sharma, the other interlocutor, were only allowed to talk to the two bureaucrats Nirmala Buch and S.K. Misra. The two government interlocutors apparently quoted various technicalities each time Haragopal and Sharma conveyed the demands of the Maoists. This stretched out matters a bit. Haragopal says he has a sneaking suspicion that Raman Singh might have wanted the talks to fail. Haragopal, however, is all praise for Naveen Patnaik saying the Orissa CM took personal interest in the talks and ensured that every government department co-operated with the mediators.

Haragopal's role as a mediator to secure the release of IAS officers kidnapped by Naxals is not recent. Way back in 1993, when senior IAS officer S. R. Sankaran and others were kidnapped, it was Haragopal and noted civil rights activist K. G. Kannabiran who had participated in discussions with Naxals. About the current mediation in Sukma, Haragopal says he along with Sharma received a warm welcome by the Maoists inside the jungles of Chhattisgarh who had even put up banners welcoming them. Some senior IPS officers in Andhra Pradesh who don't quite agree with Haragopal's ideals sarcastically term him the "professional interlocutor".

Finally, some good news. A scheme which has touched the hearts of the poor is underway. Bhojanamitra, a mid-day meal programme for those attending to patients in government hospitals has been launched at Niloufer hospital. The scheme is being run by the Hare Krishna Movement and Megha Engineering Infrastructure Ltd and would soon be extended to other government hospitals in the Twin Cities such as Osmania, Gandhi, etc. Quite similar to the mid-day meals served in government schools, the scheme primarily aims to meet the needs of families of poor patients coming from rural areas to the city for treatment. It will consist of rice, curry, sambar and buttermilk. With bypolls on the anvil, Bhojanamitra might serve as a perfect route to the voters' hearts.