Chavez is irreplaceable, but he is also, undefeated. Viva Chavez! 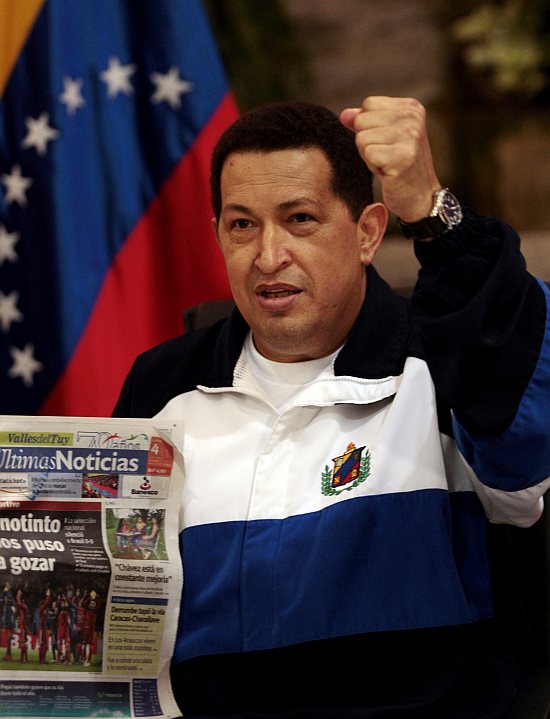 I only started paying attention to Hugo Chavez and Venezuela at the time of the 2002 coup. At the time, I was deeply engaged with the Canada Colombia Solidarity Campaign. Friends I was making were on the run, living underground, trying to work in a context of disappearances and massacres, assassinations and torture, in a country that was being reshaped by a massive military program called Plan Colombia. We believed at the time that Plan Colombia was not just about Colombia, but about the whole hemisphere and very specifically about Venezuela, its oil wealth, and its uncooperative government. But I didn't know much about that government or think much about it other than that it was up to Venezuelans to decide, and it seemed to me that they had decided.

In the 48 hours or so that the 2002 coup lasted, I interviewed some Venezuelan activists who had gone underground, and they gave me some readings (Richard Gott, Juli Buxton to start). I looked at the data. When Chavez was restored, I started following Venezuela closely. The Revolution Will Not Be Televised became my favourite documentary. And over the next 11 years, with two visits to Venezuela, I saw so much to admire. Everywhere I went in Venezuela, as I heard the language, saw the people, saw the physical landscape, I was reminded of Colombia. But the everyday paranoia and fear of the regime that I could feel in Colombia didn't exist in Venezuela. While Colombia was living through this nightmare of displacement and violence in its US-sponsored counterinsurgency, Chavez's Venezuela was actually making real progress for its people. That Colombian nightmare was always in the back of my mind whenever I heard about Venezuela, that if the US had their way, Venezuelans would be living that nightmare too.

The welfare and the democratization, the regional and international diplomacy, are all huge achievements, a tremendous legacy. But for many of these years I have thought of Chavez's legacy in terms of avoided losses. Thousands of people *not* massacred, millions *not* displaced, thousands *not* dying from preventable diseases, tens of thousands of opportunities for education *not* wasted, for fourteen years. Almost a generation.

Greg Grandin, in his article On The Legacy of Hugo Chavez, wrote something that I really felt:

"Let’s set aside for a moment the question of whether Chavismo’s social-welfare programs will endure now that Chávez is gone and shelve the leftwing hope that out of rank-and-file activism a new, sustainable way of organizing society will emerge. The participatory democracy that took place in barrios, in workplaces and in the countryside over the last fourteen years was a value in itself, even if it doesn’t lead to a better world."

He made all of this happen in Venezuela, and the fact is that even if all he did was talk, I would have appreciated Chavez a lot and taken his loss personally, which I do. I remember during the 2004 recall referendum, when his people were concerned about how the opposition or the US might try to sabotage the revolution, he told a story from Venezuelan folk history about a character named Florentino, who played a game with the Devil, singing songs back and forth. Florentino was the last one to sing, and so he drove the devil off. The night before the referendum he told the opposition that he would invite them for breakfast— well, brunch, given how late they would be up celebrating. The next day he said, the brunch we prepared got cold, because nobody came. He was one of the only political figures to talk straight about Haiti, about Afghanistan, about Iraq, about Palestine and it was refreshing to everyone who knew what was happening in these places and knew how it was being hidden under clouds of confusion and lies.

Chavez is irreplaceable, but he is also, as Derrick O'Keefe wrote, undefeated.