How China Is Confronting Its Economic Crisis

Its state-dominated economic structure seems to be in a position to manage the fallout. The Party's absolute commitment to self-preservation helps. 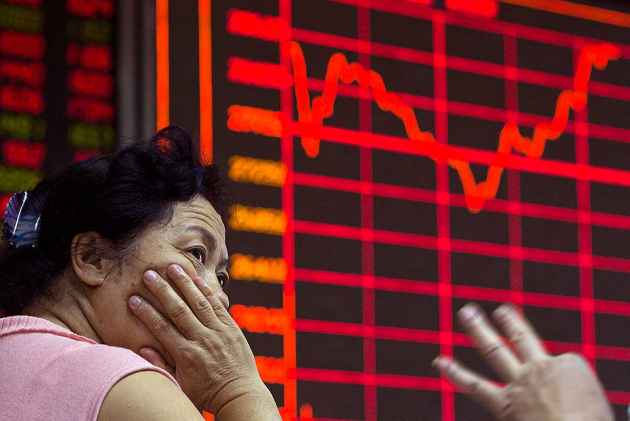 With China set to record its slowest growth in decades, there are many ways to understand its economic woes. One is from a purely statistical perspective by evaluating empirical data such as trade and investment statistics to discern trends in the world's second-largest economy. Another approach is to scratch the surface to uncover deeper structural dynamics that move the Chinese political economy. The latter approach is also useful in anticipating the transition process as the Party attempts a formidable restructuring of China's economic path.

Most assessments of China's future economic trajectory revolve around assumptions and arguments on the nature of post-Maoist politics. Unlike Mao's China where ideology was at the centre-stage of decision-making and economic choices, Deng Xiaoping's China opened a Pandora's box where China could be faithful to its core precepts and yet flexible enough to embrace some neoliberal economic norms. This intricate balancing act was less harmonious or pre-determined than is often narrated by western sinologists or by China's own historical discourse. In fact, the post-1978 journey has been an inherently contested process.

The main structural feature domestically is the flux of the Dengist system and how two images compete to shape China's political and economic system. The core ideational cleavage is between the reformers and the leftists on the evolution of the post-Maoist system that Deng began adapting after 1978. This is not to suggest that leftists reject "reforms" per se, but their interpretations of the transition process begun by Deng Xiaoping are typically distinct from the reformers. The other commonly used typology of liberal-conservative or liberal-orthodox also conveys the same essence, except that liberals can also be politically conservative thereby obscuring the real ideological differences, which lie in the economic sphere.

The reformers prefer an open-ended transition from socialism by liberalising the political economy: expanding the non-state private sector, decentralisation with more power to provinces etc. But they are unable to articulate a clear political or institutional template for a post-Communist Party China. The leftists also accept Deng's re-interpretation of the Maoist system as "socialism with Chinese characteristics", which enables China to leverage the world capitalist system and the market for economic growth and development. However, according to the leftists, in this socialist-modernisation process the red line of the one Party-state must not be diluted. This also implies clear differences between the reformers and the leftists in the evolution of China's political economy.

For leftists, non-state sectors and multi-ownership systems can co-exist in the political economy but must remain subordinated to a dominant state sector. The leftists seek to preserve the Party-state hold over the economy and the central state-owned enterprises (SOEs) and the nationalised banking sector, which are portrayed as vital pillars of the political economy and China's overall socio-political stability. The reformers seek to strengthen the non-state sectors and gradually liberalise the economy. They are either agnostic or receptive to new class formations that emerge outside the state sector because of privatisation and deep involvement with the international political economy. Leftists, in contrast, remain committed to ideologically preserving China's "socialist" identity and counteracting the effects of parallel class structures with epistemic linkages to the world capitalist system. In sum, these two images are embodied in competing factional groups and coalitions that have vied for control over Party and state policymaking institutions since the 1980s.

Is China reversing Deng's open-ended reform process? It is not easy to attempt a factional analysis of Xi's regime or assess the balance of forces and ideas within the contemporary political scene. The proliferation of factions in the past decade might suggest more disunity than is actually prevalent. What is quite apparent is that since 2012 the Party has rallied around a more conservative consensus favoured by the leftists. This is reflected in the centralisation of strategic and economic policymaking, strengthening of the Party and state apparatuses, and restoring the civil-military balance.

It is also evident by a concerted quest for new legitimacy enhancing measures to supplement what in Deng's era was largely an economic performance-based model to stave off social instability. Xi's regime has elevated ideology and nationalism along with material performance as dual legitimising variables for buttressing the Party's position. The recent Second World War commemorations in Beijing also fall into this category of constructing regime-legitimising events.

While it is tempting to portray a dramatic shift in Chinese politics, it is more likely that we are witnessing a process where the Dengist compromise between political and economic ideas is being adapted for another open-ended transition path where the one-Party state will strategically seek to both leverage and counter-balance the forces of private domestic production and economic interdependence. In terms of foreign policy too, while the Dengist consensus on bandwagoning with the US has been clearly jettisoned, China is nowhere near emulating Mao's foreign policy where domestic tumult manifested in its external interactions in unpredictable and dangerous ways. Foreign policy is, relatively, still pragmatic and attuned to the global balance of power.

Can China avoid a hard landing?

The imbalances within China's economic model have been well recognised. Until 2008, the global economy provided a willing outlet for China's massive industrial and export capacities. After the 2008 global crisis, China shifted its growth levers towards a more intensive investment-driven model that witnessed a massive infrastructure boom and the creation of new urban locales. Post-2009, fixed-asset investment was accounting for up to 70 per cent of GDP growth. But this pace of physical urbanisation and real estate capacity was simply too rapid for Chinese households and rural migrants to absorb.

As China's GDP growth has fallen, this supply-demand imbalance is coming to the fore. The spillover of this slowdown is also reflecting in accumulated debt, which fueled the investment boom. According to Mckinsey data, China's total debt rose from $7 trillion in 2007 to $28 trillion by mid-2014. This figure was 282 per cent of China's $10 trillion GDP.

Much of the debt is linked to China's decentralised economic model and fiscal structure where the provinces were incentivised to generate local resources to finance investment and growth. For the past two decades, land has been the indispensible resource for provincial governments to buttress their fiscal balances. Nearly 40 per cent of total governmental revenues depend on land sales and property taxes. This process of privatising or collateralising land spawned a more complex and larger web of $9 trillion debt that is spread across private property developers and construction-related enterprises across provinces.

In terms of direct contribution to China's GDP, real estate accounts for 20-25 per cent of the national economy. Slowing or falling house prices, largely because of overcapacities in urban housing infrastructure, have opened a cycle of declining wealth and purchasing power that is also impacting provincial balance sheets. According to one estimate, in 2015, some local governments are forecast to record their first contraction in revenues since the early 1990s. The argument that a national growth juggernaut and a rural to urban exodus would enable China to sustain an investment and debt-intensive model indefinitely now rings hollow.

The distribution of domestic debt across sectors reveals an interesting picture. Household debt is the lowest, accounting for only 13 per cent of China's total debt. State debt accounts for another 20 per cent. Corporate enterprises account for 44 per cent and financial institutions account for the remaining 23 per cent. Strikingly, the private sector has accumulated the largest portion of Chinese debt. While the relationship between the state and non-state sectors is more complex especially at the microeconomic level, the state-dominated economic structure seems to be in a position to manage the fallout, and, distribute or diffuse the economic pain that is likely to ensue with a slower GDP growth trajectory.

Such policy levers offer Beijing unique options to engage in re-distribution policies to target specific areas of the economy and manage crises in different provinces. Overall, such a combination of positive and coercive instruments lowers the probability for a "hard landing".

Finally, there is some evidence to suggest that a modicum of rebalancing is occurring. According to official statistics, in 2014, consumption contributed 51 per cent to GDP growth. In the first half of 2015, domestic consumption contributed 60 per cent of China's economic growth compared with 35.7 per cent for capital formation (investment) and 4.3 per cent from net exports. The rural agricultural sector is also robust with 12 consecutive years of growth (agriculture accounts for 35 per cent of total employment).

Despite the inherent ideological contradictions in the post-Mao reform era, China's leaders have prided themselves on adapting their socio-economic policies to stave off an existential crisis. This process has proven resilient so far. It withstood the collapse of the Soviet Union and the preponderance of American power and norms in the 1990s. Then the post-2008 crisis phase underscored China's ability to offset the worst consequences of the global slowdown. Beijing's hope was that the global economy would resuscitate by 2015 and offer another growth cycle to prolong China's imbalanced model. This, of course, has not occurred. What can we now expect?

The global economy is unlikely to offer an avenue to externalise China's problem of over-production. The geopolitics of US-China relations isn't conducive to negotiating big global trade-offs either. Neither is China's domestic system inclined for radical reforms, a path that most Chinese intellectuals and leaders believe would quickly unravel the system. Chinese leaders are more likely to emulate their Confucian predecessors who had constructed an all-encompassing state to govern pre-modern China. As the French sinologist Jacques Gernet observed, "The only problem for the Chinese state in the course of its long history, was to prevent the development of powers other than its own, such as that of the merchants, the armies, the religious communities, and to prevent dangerous splits at the top." The Chinese Communist Party is programmed to think and operate in similar terms, and, Xi's ascent has only reinforced this basic impulse to preserve the one-Party state.

Thus, the only probable alternative is a process that includes a deceleration of Chinese growth rates, a stronger and internally engaged central government, and, a more aggressive outbound geoeconomic strategy to tap new investment and export markets. As China's finance minister told G-20 leaders last week, Beijing expects a painful five years and a period of difficult adjustment for the next decade. The Party's absolute commitment to self-preservation, however, implies that China will continue to evolve in ways that will probably defy many predictions.