It is indeed very rare that one nurtures the idealism of one's youth, sticks unwaveringly to its course and allows it to gently mature the way Sharada Prasad has done 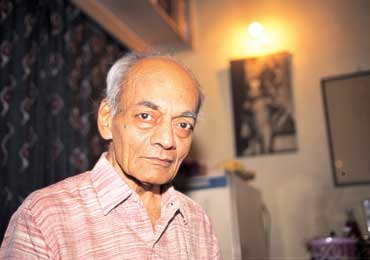 The relationship between fathers and sons has occupied my mindspace in the last couple of weeks. As if to aid the thought process, Narayan Dutt, renowned Hindi journalist and one of H.Y. Sharada Prasad's younger siblings, sent me a photocopy of a letter that Sharada Prasad wrote to their father, H Yoganarasimham, nearly 65-years-ago.

To write about this letter is important because it came across to me as a prescient summary of a man we later came to realise as erudite yet humble; powerful yet humane; incorruptible and self-effacing information advisor to three Indian prime ministers. This letter, I believe, reflects the roots of his calm self-awareness, natural restraint and moral conviction.

Sharada Prasad (HYS), who is 'Shouri' to his family and close friends, wrote this letter in his mother tongue, Kannada, from a Mysore prison on the day he turned 19 (April 18, 1943). He was arrested for participating in the 1942 Quit India movement. He was then studying for a BA degree and was also the secretary of the Maharaja's College Students' Union. He was kept in confinement for over a year. HYS's father Yoganarasimham, the addressee of this letter, was himself a Gandhian nationalist, Sanskrit scholar and composer. Some of his compositions have been rendered by legendary Carnatic vocalist M S Subbulakshmi.

Here are some excerpted and translated paragraphs from the letter:

"Salutations to father from Shouri.

"Nineteen years have rolled in my life. The moment I stepped into my nineteenth year, I felt my adolescence has come to an end. In this past one year, my wealth of experience has increased two or three fold. But that shouldn't lead me to arrogantly claim that I know all that one needs to know and am wiser than others of my age. One thing is true at this juncture - last year I had a queer fear about life. It was largely due to my ignorance. But during this one year, my self-confidence and trust in myself have grown considerably.

"Many did not expect my life to take this turn. However, inside me, I often felt that I would one day be a soldier in the freedom struggle. At times, this feeling found outward expression too. But I hadn't imagined that I would stumble upon this great opportunity so soon. There is no reason or room for regret about my new life. Whatever pride I can justly corner for my new life I shall stake claim. But this pride shall not be misplaced or cause self-love. On the other hand it will only strengthen my sense of self-dedication. Therefore on this important occasion, when I pass the nineteenth milestone of my life, I renew my pledge to remain devoted to my duty and cause till the end. Whatever my be the consequences, I shall not retrace my steps.

"When we met sometime ago, you had expressed concern that the environment of constant strife in the prison may have an adverse effect on me. I shall never let it happen that way. On the contrary, I feel prison life has led me to dispassionately think about human nature and its various attributes. Through this I have begun to understand more clearly the greatness and importance of human decency and the devotion with which one needs to pursue it.

"There were plans to transfer us to another prison, but they seem to have dropped the idea for now... If possible please send me ragi-hurittu, not that I have a craving for it, but I want to avoid eating rice all the time. Once again I wish to convey my gratefulness for your blessings..."

That was the 19-year-old's letter. HYS is now getting close to be 84. He has been in and out of hospitals with medical complications in the last one year. Even now he is at AIIMS. He has been suffering from Parkinson's for a few years. But despite the harshness with which life has treated him, he has remained utterly loyal to the idea of 'human decency' that he perhaps first explored and formulated at 19.

A couple of years ago I was engaged in bringing out the Kannada edition of his book The Book I Won't be Writing and other Essays. When I was looking for an appropriate blurb for the book jacket, I found a copy of the speech that Sonia Gandhi had delivered when HYS was presented the Indira Gandhi Sadbhavana Award in 2001. Besides the predictable praise there were a couple of powerful lines that have remained etched in my mind. Sonia Gandhi was not being generous when she said:

"Sharada Prasadji represents the noblest human faculties. He stands as a model of integrity, dignity and probity in public life. No wonder that some of his colleagues refer to him as 'jagadguru'... His learning is strengthened by his wisdom. In Indiraji's secretariat, the conventional wisdom was 'When in doubt do as Sharada does'... Sharada Prasadji never raises his voice and has never been known to lose his temper. Yet no excess has been condoned by him... in view of his well-known reticence I have taken special care to use very few words, and tone down my expressions of regard and respect for him..."

When the Kannada book was released, the former chief justice of the Supreme Court and chairman of the Constitution review panel, Justice M N Venkatachalaiah, was present at the function. His reading of the man was not very different. He said:

"Sharada Prasad is an extraordinary life in our times. He is a 16-annas Mysorean, but he is also a 18-annas Indian. He is a great gift of Mysore to the country, who epitomizes humility and simplicity. But concealed behind all this is tremendous learning and the strength of great scholarship. In our simple but wonderful culture, connubial felicity used to be the thought behind a husband bringing Mysore mallige (jasmine) to his wife, a little Mysore pak (a bengal gram-flour sweet dish), may be even some Nanjangud rasabale (local variety of banana). To that connubial felicity, we can add the graciousness of Sharada Prasad. Please do not think it as a triviality, it has deep meaning. He represents a kind of civilisational culture. I request Sharada Prasad to spend more time in Mysore and Bangalore. His presence will have a civilizing effect."

On the occasion, HYS himself made a pithy statement that for him "living was more important than writing."

It is indeed very rare that one nurtures the idealism of one's youth, sticks unwaveringly to its course and allows it to gently mature the way Sharada Prasad has done. It is never easy to keep life as one continuous and seamless moral whole, especially in a power-drunk and corrupt milieu.