Hindutva For A Few Dollars A Day

The tehelka.com scandal offers a new insight -- not only into BJP corruption, but also in the RSS, that paternal figure that pulls the strings of the political party. 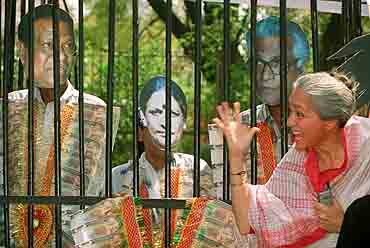 Of course none of this is new, and we really didn't need the tehelka.com journalists to inform us about the rot of the BJP-RSS. This party of middlemen has a long history of dalali (bribery) -- Advani's name, along with others, figured in the hawala scandal; the BJP's friends, the Hindujas have a long string of scandals from the Bofors debacle to the recent passport scam in England; there are a host of local scandals that run the gamut from payoffs for business deals to Mafia-type murders for election gain; finally, for us in the U. S., there are rumors of dollars being smuggled into India, some via gold merchants in Queens. Mr. Laxman wants dollars because dollars govern the swadeshi BJP-RSS, and it is the saffron dollars from the U. S. that gave them sustenance to come to power in the first place.

The tehelka.com scandal offers a new insight, now not only into BJP corruption, but also in the RSS, that paternal figure that pulls the strings of the political party. The Gupta family illustrates that even this supposed disciplined party feeds at the trough of dollar corruption. Mr. Raj Kumar Gupta, national trustee of the RSS for a quarter of a century, tells these pretend arms dealers that "I am expecting commission this year of Rs. 100 crores." His son, Deepak, says that "whatever money goes to the government goes through me." He is the same character who supposedly made an enormous bribe-commission on the Sukhoi-30 Mk arms deal between the Indian and Russian militaries. Dollar dharma from the RSS.

What then is this RSS-BJP "patriotism" all about? The BJP-RSS are patriotic, but only to the Brahmin-Banya-Big Bourgeoisie, not to the bulk of the Indian population. Those who mistook the RSS-BJP for a patriotic party did not see that it was only the party of a certain section of the population. It is this section that has been exposed by the tehelka.com scandal, as it was in the hawala scam. Some people would like to say that only a few bad apples do not condemn the entire orchard: but we are not talking about a few apples, but the core itself, the president of the party, the leaders of its main alliance partner and trustees of its ideological wing. And, besides, these few names are only those released in the first set of tehelka.com tapes (knowing them from the cricket scandal, they will carefully release their tapes for maximum media impact). Also, the scandal was uncovered by two journalists who spent a mere Rs. 11 lakhs on the story. If a national inquiry was conducted at a larger scale, it would surely have shown that the RSS-BJP patriotism was rotten to the core, but true to those classes that benefit from its rule.

The scandal is not only in the bribes.These are nothing. A lakh here, a lakh there. Journalist Ken Silverstein informs us that the U. S. Congress is no better. The return on investment to U. S. lawmakers is astounding: in 1996, Lockhead spent $5 million to lobby Congress and earned $15 billion of tax-money to underwrite foreign weapons sales, while in that same year, Microsoft spent under $2 million and earned tax credits worth hundreds of millions of dollars for license sales to software programs manufactured overseas. Washington D. C. on $10 million a Day. New Delhi on $2000 a Day, a few cowries more or less.

The scandal is not just the bribes, but it is the institutional rot. Whatever the RSS-BJP touches is fundamentally corrupted. As it came to power in 1998, the Hindu Right stuffed its people into government bureaucracies and fired many long-time civil servants (no government before had done such extensive house-cleaning). The scandals over the Indian Council of Historical Research, the NCERT, and every other government bureaucracy is by now well-known. This is just how fascistic movements operate: they do not allow state institutions an autonomous logic, but try to make them subservient to its own will. The ICHR, for example, ceases to be about the discipline of history, but it becomes about the glorification of the past as represented by Hindutva. But the RSS-BJP did not stop at the civilian bureaucracy, for it also put its paws into the military. The scandal over the firing of Admiral Bhagwat, the favoritism in the promotions in all three services and the scandalous use of military honors after the Kargil War -- all point to the widespread disruption of the military establishment for nefarious political purposes. That the military is now so heavily involved with the corruption is thanks to the RSS-BJP-type regime.

Major General Manjit S. Ahluwalia, Director General of Ordinance and Supply, one of the top men in-charge of goods, told the tehelka.com journalists "you can't come to my house without a bottle of [Johnny Walker] Blue Label [whiskey]." The dollars are in liquid form. On 22 December 1998, the BJP welcomed 90 retired military personnel into the party. At the event, one ex-officer noted that "the armed forces can do anything better than others, whether administrative work in the government or running the politics of the country." This undemocratic, and fundamentally fascistic, sentiment should have been hastily condemned by the RSS-BJP, but no, the party of "stability" and "honesty" went along with it. We had a senseless nuclear blast which provoked the Kargil War, and now we have a fundamentally compromised military.

The RSS-BJP-allies government refuses to resign. It may hold onto power in the short-run, and its friends in the U. S. may claim that the entire episode is politically motivated. No-one, however, is misled that this party of "dharma" is nothing but the pious face of dalali and hawala, of those who want to sell off the country's assets (such as profit-making public sector concerns like BALCO) or else bankrupt the country for multinational firms (as with Enron). The "patriotism" of the RSS-BJP is the patriotism of money, of the saffron dollar that is insatiable for profit and unconcerned with the welfare of the people. Some will nod their heads and say that "everyone takes bribes" as if this is normal, and therefore forgivable. Others will say that only some are involved, that Vajpayee (always Vajpayee) is above it all -- this is like saying that Ronald Reagan did not know about the Iran-Contra affair, when in fact the point is that these people tell us that they operate as a disciplined party that has an ideological face. There is no way to tell this story and not offer a fundamental criticism of the Hindu Right and its shenanigans whilst in power.

Biju Mathew is Professor of Business at Rider College (New Jersey); Vijay Prashad is Director of International Studies at Trinity College (Connecticut) and author of  Karma of Brown Folk (Minnesota, 2000). Both are co-founders of the Forum of Indian Leftists (FOIL) and members of the collective of Youth Solidarity Summer (YSS).

(As we got ready to put this up, came the news that after much high drama and Trinamool withdrawing support, Shri George's resignation had finally been accepted. Shri Vajpayee apparently had a good evening enjoying a sitar recital before that. No, we shall refrain from bringing in Nero and his fiddle.)