Advertisement
Home International
After the capture

Saddam Hussein's capture and the hope he will be held accountable for crimes against the people of Iraq and neighboring states is welcome news, no matter what one's position on the U.S. invasion of Iraq. But this doesn't vindicate the U.S. invasion. 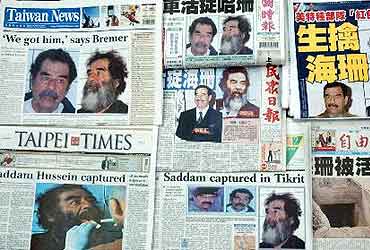 Saddam Hussein's capture and the hope he will be held accountable for crimes against the people of Iraq and neighboring states is welcome news, no matter what one's position on the U.S. invasion of Iraq.

But this doesn't vindicate the U.S. invasion. It doesn't change the fact that the administration lied about Iraq's alleged weapons of mass destruction or that Iraq is undergoing occupation, not liberation.

Nor does it vindicate more longstanding U.S. policy. It is crucial that Hussein's eventual trial cover the entire history of his crimes and of those who supported them. We need answers. Why did the Reagan administration provide Hussein with military intelligence to help him in his savage attacks on Iran in the 1980s? Why did U.S. companies provide Iraq with chemicals and seed stock for biological weapons? Why did the United States continue to fund Hussein and provide him diplomatic cover, even after he gassed the Kurds of Halabja in 1988?

And, what did current Secretary of Defense Donald Rumsfeld say to Hussein when he met with the dictator as Reagan's special envoy to the Middle East in 1983? Will Rumsfeld be subpoenaed to testify about it?

If the trial of Hussein is conducted openly and honestly, U.S. crimes in Iraq and throughout the Middle East, through Republican and Democratic administrations alike, will be laid bare for the world to see.

More important, however, we must recognize that the key issue is the occupation, not Hussein. There is little indication that either the brutality of the U.S. occupation, or the armed resistance to it, will end soon.

Military officials have quietly admitted for months that Hussein had little to do with coordinating the resistance. London's Independent newspaper identified at least 12 different loosely connected guerilla groups, only one of which could be identified as Hussein loyalists. Most of the people fighting never had any love for Hussein; one British expert has referred to the resistance as "self-generating."

The fighters likely have various motivations, but they share a common goal: Ending foreign occupation. After last month's running battles in Samarra, where U.S. forces killed dozens, one Iraqi said, "Everyone is with the resistance. Saddam Hussein is finished. We are protecting our honor and our land."

Resentment against the occupation goes far beyond the armed resistance. And, given the nature of the occupation, that's hardly surprising. After a brief period of freedom, the Coalition Provisional Authority imposed press censorship in June. The U.S. military estimates 10,000 Iraqis are being held, most without charges, in camps under dehumanizing conditions. Many were simply in the wrong place at the wrong time. Hundreds of civilians have been killed by troops who, Iraqis are convinced, place little value on Iraqi life.

Beyond that, Iraq has been a laboratory for the administration's extremist economic ideas. With the stroke of a pen, U.S. viceroy L. Paul Bremer cut Iraq's highest tax bracket by a factor of three. He threw 400,000 people out of work, with no provision for re-employment. He laid the groundwork for rapid privatization of Iraq's industry, a fire sale not seen since the fall of the Soviet Union. And with all that, to this day, electrical power and basic services have not been restored to prewar levels. According to some surveys, infant mortality in Iraq is double what it was before the war.

Worse yet, for all the posturing about restoring Iraq's sovereignty, the real plans of the administration are rather different. The U.S.-appointed Governing Council was created as a temporary puppet government under Bremer's control and a springboard to the next stage -- a permanent government that will be nominally independent but function as a U.S. client state. While many Iraqis are calling for free and open elections, the CPA is peddling a convoluted caucus plan specifically designed to keep the Iraqi people out of the emerging political process, restricting political participation to groups that have already decided to collaborate with the U.S. occupation.

Americans are left facing the same harsh facts we have always had to face: The conquest of Iraq had nothing to do with the safety of Americans or the freedom of Iraqis. It was designed to extend and deepen U.S. dominance over the strategically crucial energy resources of the region.

That goal has little public support, either in Iraq or in the United States. While Iraqis celebrate the capture of Saddam Hussein, Americans should mobilize to pressure our government to end the occupation now.