From Speech To Action

While Musharraf's speech was an anti-climax, more than a war of words, the need to seriously examine the role and importance of covert action (which is not terrorism) cannot be over-emphasised. 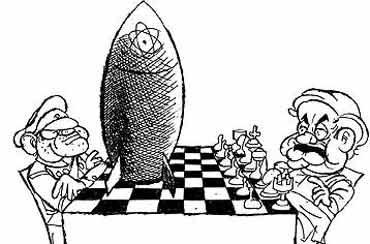 outlookindia.com
-0001-11-30T00:00:00+0553
Pakistan President Gen.Pervez Musharraf's televised speech of May 27, 2002, came as an anti-climax, belying the expectations of many analysts that he would address more sincerely than in his speech of January 12, 2002, the concerns of the Government and the people of India relating to the use of terrorism by Pakistan's military-intelligence establishment as a weapon against India to achieve its strategic objective of annexing Jammu & Kashmir (J&K) by keeping the Indian security forces bleeding.

The speech was evasive without any reference to specifics and his tone was unyielding and even defiant. Even the self-criticism, which one noticed in his January 12 speech, was absent and there was no condemnation of the activities of the Pakistani Punjabi terrorist groups, which a well-known analyst of Pakistan had recently referred to as the Punjabi Taliban, in J & K and other parts of India. What struck one was his over-anxiety to avoid any criticism of Pakistan's religious extremist parties, which have been used by the Inter-Services Intelligence (ISI) since 1989 to keep blood flowing in our territory.

Even at the risk of repeating once again what this writer has been saying and writing again and again, one has to underline that what we are facing since 1993 is no longer Kashmiri militancy due to feelings of deep alienation in the local population, but Pakistani Punjabi terrorism in the name of the Kashmiris. Terrorist organisations such as the Harkat-ul-Jihad-al-Islami (HUJI), the Harkat-ul-Mujahideen (HUM), the Lashkar-e-Toiba (LET), the Jaish-e-Mohammad (JEM), the Al Badr etc are pure and simple Pakistani Punjabi organisations, which are not interested in the welfare of the Kashmiris. Even according to the HUJI's own publications, only 200 of its 650 cadres killed by the Indian security forces since 1991 were Kashmiris. The remaining 450 were Pakistanis, with the Punjabis constituting the largest number.

Their interests have nothing to do with the interests of the Kashmiris. These are pan-Islamic organisations of the same mould as Osama bin Laden's Al Qaeda and members of his International Islamic Front For Jehad Against the US and Israel. Their aim is not just "the liberation of Kashmir", but the "liberation" of the Muslims of India, their Talibanisation and the creation of a new Islamic Caliphate extending from Pakistan to Indonesia, consisting of Pakistan and the "liberated Muslim homelands" of India, Bangladesh, Myanmar, Malaysia, Singapore, which they look upon as rightfully belonging to the Malay Muslims, Brunei, southern Philippines and Indonesia.

Their ranks have been swelled and their irrationality has been hardened after October 7, 2001, by the influx of the dregs of the present war against terrorism in Afghanistan, who pose a serious threat not only to India and the US, but also to the countries of the ASEAN and to international peace and security. Before October 7, 2001, there were two terrorist infrastructures in the epicentre of international terrorism as the Pakistan-Afghanistan region came to be called -- one directed against India located in Pakistan and the other anti-US and anti-West located in Afghanistan.

The one located in Afghanistan has now been shifted to Pakistan, with the knowledge and complicity of Pakistan's military-intelligence establishment, and the two have been acting in tandem targetting Indian as well as Western nationals and interests. It will be totally unwise and suicidal to think that Musharraf has no control over them and that they are being activated by rogue elements in Pakistan's military-intelligence establishment beyond his control.

The Al Qaeda and the other constituents of the International Islamic Front were the joint creations of Gen.Musharraf, Gen.Mohammad Aziz Khan, the Chairman of the Joint Chiefs of Staff Committee, and Maj.Gen. (retd). Mahmud Ali Durrani, when they were the blue-eyed boys of the late Zia-ul-Haq. They raised this "Army of Islam" for use against the Soviet troops in Afghanistan and diverted it against India post-1993. The pre-1998 "Army of Islam" has become the post-1998 International Islamic Front.

To expect Musharraf to become a repentant sinner, give up the use of terrorism and destroy his own creations would be to live in a dangerous world of illusions. Till September 11, 2001, Musharraf used to project in public the capture of Afghanistan by the Taliban as his and the Pakistan Army's greatest success story since the defeat of 1971 at the hands of the Indian Army.

He and his officers were hoping and continue to hope, despite the defeat of the Taliban by the international coalition in Afghanistan, that this "success story" could be repeated in India with the help of these Pakistani Punjabi Talibans. He has been able to persist with his perfidious actions because he thinks that the US, the UK and other Western countries would not pressure him beyond a point to meet India's concerns. Unfortunately, he has been proved right till now in his assessment of the Western ambivalence.

The international coalition led by the US has been fighting against terrorism in Afghanistan for over six months. Apart from having the Taliban replaced, their achievements have been inadequate. Over 80 per cent of the Al Qaeda and the Taliban and of the components of the International Islamic Front, including their leaders, are intact and alive and kicking in Pakistani territory.

They have stepped up terrorism not only against India, but also against the US and France. They are threatening to target the UK too shortly. What intelligence Musharraf has given to the coalition? How genuine has he been in his co-operation with the US? What action has he taken to smoke out the dregs from their Pakistani sanctuaries? Why has he made a farce of the investigation and trial of Daniel Pearl, the American journalist, who was kidnapped and brutally murdered? Why has there been no progress in the investigation of the grenade attack in an Islamabad church on March 17, 2002, when two Americans were killed, and of the suicide bomb attack on the French in Karachi on May 8,2002?

An objective examination of the answers to these questions would enable the US to remove the blinkers from its eyes, but it does not want these blinkers to be removed lest it start seeing Musharraf for what he really is -- the godfather of international terrorism emanating from this region.

Since he joined the Army in 1964 Musharraf has grown up with the belief and conviction that he can fool all people for all time. We have to prove him wrong.

What are the options available to India? New Delhi would be totally -- legally, morally and ethically -- justified in taking military action. But, before doing so, we must carefully examine whether the direct military option would help us achieve the objective of putting an end to Pakistan-sponsored terrorism.

The immediate-short term option has to be decided by the Government on the basis of the intelligence, information, insights etc at its disposal and all should support the Government in implementing its decision.

The possession of an effective covert action capability and the willingness to use it, if and when necessary, is the only deterrent against an adversary such as Pakistan which thinks it can achieve its objective against India through covert action.

Covert action is not terrorism. Covert action is identifying the sensitive points of the adversary and exercising sustained pressure on those points through deniable means till results are achieved.

Terrorism, particularly the State-sponsored kind, is an unconventional war. To be effective, the response to it in thinking and action has to be unconventional.

'The Epicentre Of International Terrorism Is Located In Pakistan'