The free market is the only mechanism that has ever been discovered for achieving participatory democracy. So spake Milton Friedman. But political freedoms may not flow naturally from economic freedoms... 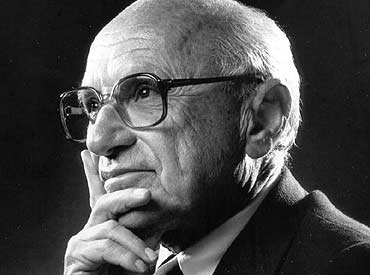 The lives of two recently deceased nonagenarians, one a brutal military dictator, Augusto Pinochet, and the other a brilliant and influential economist, Milton Friedman, came into brief contact three decades back – and it landed the economist in political controversy.

Friedman met Pinochet in 1975 during a lecture tour to Chile, and critics of Friedman, unfairly charged him, a champion of freedom, with endorsing the military regime. What did soften him somewhat toward that regime was its eagerness to listen to the economic advice of the "Chicago boys" on the value of free markets. Beyond the ephemeral oddities of personal behavior, there is a substantive issue worth pondering, particularly on the occasion of "Milton Friedman Day," celebrated on January 29, 2007.

Friedman openly gave primacy to economic freedom over political freedom. In his 1994 introduction to the 50th anniversary edition of Hayek’s Road to Serfdom, he categorically stated: "The free market is the only mechanism that has ever been discovered for achieving participatory democracy."

In this, he seems to have gone beyond his line of thought expressed in the classic 1962 book, Capitalism and Freedom, where he stated: "History suggests only that capitalism is a necessary condition for political freedom. Clearly it is not a sufficient condition."

His 1994 statement implies that economic freedom is a necessary and sufficient condition for political freedom. This important systemic issue in the transition paths of many developing countries today has not been adequately discussed.

Take the two largest countries in the world, China and India. The last quarter century of history in China suggests that while there has been dramatic progress in economic freedom in the sense of expansion of market reform, it has not been sufficient to bring about a substantial expansion of political freedom. The first four decades of India after independence in 1947 show that a considerable amount of political freedom was quite compatible with what Friedman would consider large restrictions on economic freedom in the form of heavy bureaucratic regulations and control over the economy. (Many years back in a conference when Friedman attributed the widely-acclaimed postwar advance of the Japanese economy, in contrast to the relative stagnation of the Indian economy, to the regulations and controls in the latter, I pointed out to him that the Japanese state was not particularly a paragon of non-interference. His answer, unfalsifiable as it happened to be, was that the Japanese economy would have done even better without the state interference!)

It is possible that a quarter century is not long enough for the effects of economic freedom in China to work out in political liberalization, and people point to other East Asian countries – South Korea, Taiwan – where capitalism, which thrived under initial decades of authoritarianism, may have paved the way for the eventual ushering in of democracy. But the police state in China shows no signs of loosening its grip soon, despite the dramatic progress in the opening of the economy. While there has been some relaxation in individual expressions of thought, the state never fails to clamp down on political activities that have even a remote chance of challenging the monopoly of power of the central authority. Some observers have even claimed that the large numbers of reported local disturbances in recent years in different parts of China – mainly around economic issues like land acquisitions, toxic pollution or mass lay-offs from state-owned enterprises – have allowed the central government to scapegoat and punish local officials, localize and diffuse unrest, identify discontented groups before they can coordinate across regions, and retain its tight control over the citizenry as a whole. Elsewhere in Asia, leaders in Singapore, poster boys of economic freedom in the eyes of many, have continued for decades to repress political freedom. Lee Kuan Yew’s famed "Asian values" were market-friendly, but not very hospitable to political dissent.

In the Heritage Foundation ranking of countries in terms of their Economic Freedom Index for 2006, India’s rank, even after a decade and half of market reform, is much below that of Hong Kong, Singapore, Saudi Arabia, Kuwait, Cambodia, Kenya, Uganda and most of Latin America. Yet over several decades India has proved itself a vibrant, though unwieldy, democracy. Friedman sometimes made a distinction between political freedom and "human freedom." In terms of both, whether you take the well-known scores for political rights and civil liberties assigned by Freedom House, or the overall democracy scores given out by the Economist Intelligence Unit, India performs much better than those countries ranked far superior in economic freedom. Economic freedom does not seem to be a necessary condition for political freedom.

A look at the history of Western Europe does not clearly show that economic freedom, or "Manchester liberalism," brought about the victories of democracy. Theorists of democracy have often pointed to many other political or structural factors. For example, some ascribe the extensions of franchise and other democratic rights for the working class in the 19th century in Britain to the rivalry and conflicts between traditional aristocracy and the rising industrial bourgeoisie. Others suggest that democracy in Europe came as part of the political elite’s strategy to prevent widespread social unrest. In mid-19th century France, Louis Napoleon shrewdly used the restoration of universal male suffrage to play the landed classes against the urban; he even reportedly advised the Prussian government in 1861 to extend universal suffrage, because "in this system the conservative rural population can vote down the liberals in cities."

In India it is arguable that the survival of political and human freedom, against all odds and at a time when government control over the economy was pervasive, had something to do with the fact that the elite was heterogeneous and fractured. No individual group could overpower others, and competitive politics provided a procedural device to keep the contending partners at the bargaining table within some moderate bounds. Democracy served as a resilient mechanism for conflict management in a highly divisive society.

Friedman in recent years had been quick to point out that intensive economic liberalization in Pinochet’s Chile eventually evolved into political liberalization. But anyone familiar with the transition in Chile knows that the path was by no means smooth, and Pinochet tried his best to obstruct it. In any case other countries have been far less successful in this evolution.

One mechanism for this evolution is supposed to work through the rise of the middle class. While economic liberalization may strengthen the middle classes, these classes have not always been pro-democratic: Latin American or South European history has been replete with many instances of middle classes hailing a supreme caudillo. It is often the case that market reform tends to sharpen inequality. The resultant structures of political power, buttressed by corporate plutocrats and all-powerful lobbies, may hijack or corrupt the democratic political process, sometimes undermining the expansion of mass democratic rights, including the freedom of association of organized workers, and raise barriers to entry into the political arena for common people. Thus economic freedom may be important by itself, but neither necessary nor sufficient for political freedom.

Pranab Bardhan is professor of economics at the University of California, Berkeley, and co-chair of the Network on the Effects of Inequality on Economic Performance, funded by the MacArthur Foundation. He was the editor of the Journal of Development Economics for many years. Rights: © 2007 Yale Center for the Study of Globalization. YaleGlobal Online