A great natural tragedy bites into a coast equally very far from Batra Hospital and the DU Campus. A a psuedo-cynical 'NGO manager' goes down to see and finds the Calcutta photographer waking up again inside him.

I first began paying attention to Pradip Saha when he was starting out as a photographer in Calcutta, in the mid-80s. Interestingly, the first pictures I remember by him were ones he made at Jantar Mantar when on a trip to Delhi. They were black and white, of course, and the main thing I remember was that, besides the requisites of ‘nice framing’ and ‘caught moment’, many of the photos were somehow funny. It was a quiet and wicked kind of humour, quite separate from the kind of ‘chengda’ minor street-thug persona Pradip was developing and honing for himself. Pradip worked on his pictures and his demeanour for a couple more years after that show before he added the third component necessary to the full formation of his proper persona—the city of Delhi. 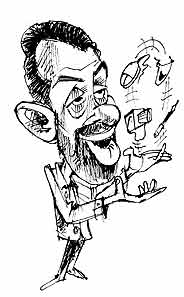 Like many Bongs who escaped Cal at that time, Pradip transformed when prowling the Capital Jungle. But while many of our co-Calcatamites became completely different creatures upon alighting from the Rajdhani, Pradip just kept tweaking himself slightly, and when I next blinked there he was, a Jadavpur Dada, one of the main people running Down to Earth magazine, involved and knowledgable about envi-eco ishoos, a master at some computer thing called ‘Photoshop’.

"What happened to photography?" I asked him while I was visiting one time. "Oh, han...tulchhi maajhe-moddhey", "Yes, I do shoot, now and then," he said, and then he moved a mouse and completely changed the tone of an image on his computer screen.

Over the next few years, Pradip Saha the photographer disappeared behind an invisibility cloak that he photoshopped out of somewhere, the photographer replaced by different Sahas: the documentary filmmaker, the graphic designer working with conceptual artists, the CSE administrator, the strategising scourge of Pepsi-Coca, etc etc.

Last week, the photographer surfaced again. The show at IHC was called ‘Still There’ and the photographs were chosen from work he did when he visited Tsunami-hit fishing communities in Tamil Nadu. These are straight pictures, in colour, and many are both beautiful and tough. There is a colourful sickle of a fishing boat buried in the sand, there is a young kid going into a balletic backfoot defense with the shambles of the storm all around him, there is the denuded, black, iron engine-mount of a catamaran grim against an implacable sea, an Indian flag wrapped around a pole, the whole idea of nation turned into a rag by the deadly visit of the vast water. Alongside these images are several tongue-in-cheek pictures all playing a riff on Aid agency logos.

So there you have it, a psuedo-cynical ‘NGO manager’ works his world in New Delhi. A great natural tragedy bites into a coast equally very far from Batra Hospital and the DU Campus. A designer and manager goes down to see and finds the Calcutta photographer waking up again inside him.