India's first Central Information Commissioner (CIC) on whether his commission under the Right to Information (RTI) Act would be able to bring transparency and accountability in India's public life... 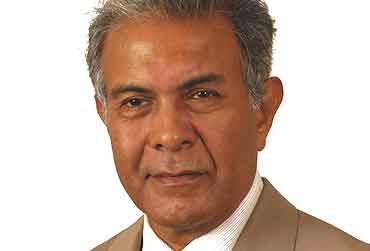 Nagendar Sharma: Would the Right to Information (RTI) Act and Central Information Commission (CIC) be able to bring transparency and accountability in India's public life?

Wajahat Habibullah: Absolutely. The two terms which you have used – accountability and transparency – are precisely the purpose of this law -- to enforce accountability and transparency in government functioning in the country. Our democracy would now become more meaningful with the new law. The Constitution already had the provision in Article 19, which allowed the citizens of the country to seek information, but now for the first time the citizens would - as a matter of right - seek information from the various departments and ministries of central as well as state governments.

Listener from Haryana: The setting up of Central Information Commission is no doubt a revolutionary step. However, people of the country are not aware of your office and its contact address. It seems government departments are not inclined to give information about this. Secondly does the RTI Act apply to court proceedings? Can the people now get free access to court proceedings? Thirdly, the law minister made some far reaching statements on judicial reforms in June in Shimla, but nothing was implemented, how can we find out about progress?

Wajahat Habibullah: If there is lack of information about our office, I think it should only be put down to the fact that we have only been recently set-up, so it may take some time. However it is good that you have asked and I am giving you our website address right now, please note – www.rti.nic.in and soon we are setting up another website its address would be www.cic.gov.in. I am also giving you my e-mail address: whabibullah@nic.in Our postal address is : Block 4; Floor 5; Old JNU Campus; New Delhi 110067.

So far as your question regarding the courts’ proceedings are concerned, the answer is yes. Since courts are public authorities in accordance with the Section 3 of the RTI Act, therefore you have a right to seek information. Public Information Officers would have to be appointed by the courts for this purpose. Now coming to announcements made by the law minister, you should put this question to the law ministry and get the answers from them. If you are not satisfied, I have already spelt out the remedies earlier, these are now available to you, use them!

Listener from Bihar: Sir, why have the defence services and ministry of defence kept out of the Right to Information Act?

Wajahat Habibullah: Right to Information applies to the Ministry of Defence and security forces of the country, as it does to any other government department, however Section 8 of the RTI Act makes it clear that where issues of security of the country as well as law and order situation in the country is involved, information in these cases would not be made public. Let me define Section 8 of the Act which says information, disclosure of which would prejudicially affect the sovereignty and integrity of India, security, strategic, scientific or economic interests of the state, relations with the foreign states, or lead to incitement of offence, such information cannot be made public. This would include Army, Navy and the Air Force. However, administrative matters in these services, would be treated like any other department and citizens have a right to seek information in such matters.

Nagendar Sharma: But Mr Habibullah, take the defence deals which have been in the eye of suspicion for many years now, and have infact seen governments voted out of power – surely the people of the country should have a right to see what happens in defence deals.

Listener from Delhi: Would information regarding appointments, transfers and postings, which have been in the eye of suspicion for many years now in centre as well as in state governments, be available to the public under the RTI Act?

Wajahat Habibullah: So far as the law and the commission is concerned, it is. Everything except what is mentioned in Section 8 of the Act, and which does not involve issues of security, sovereignty and law & order situation of the country falls within the ambit of the Act. Having said this, however let me tell you that discussions are on within the government and various ministries, about the level of information to be made public, and it is for them to give a final shape. So far as the law is concerned, it is clear.

Listener from Bihar: The allotment of petrol pumps, sale of government land in cheap rates and other such areas of favouritism and corruption, in which ruling parties indulge, would such information be allowed to be accessed by general public?

Wajahat Habibullah: Absolutely. This is precisely what has been been laid down in the statements of objectives of this law. Its sole purpose is to ensure transparency and accountability in governments' functioning. Whether any leader, official or anybody has allotted a petrol pump, government land -- in fact, let me make it clear that anything which has government money involved, which eventually means tax payers money, all that is subject to scrutiny.

Earlier also, there were provisions in the Constitution, which allowed the citizens of India to seek information, but for the first time, it has been made absolutely clear without any ambiguity that anything which raises suspicion in the public eye, whether it is allotment or sale, the ntire information sought would have to be made public. Infact, this law tells you the ways to ensure accountability in government functioning.

Wajahat Habibullah: Let me make it clear that rights which are not available under the existing laws or are not in accordance with the decisions of courts of the country would not be available under the new law. It is therefore that one cannot demand to see the answer sheets of exams by claiming a right by virtue of Right to Information Act.

Nagendar Sharma: But, Mr Habibullah, if any person is not satisfied with the information being furnished to him by a government department or official, what remedies are available to the complainant?

Listener from Lucknow : There are a few practical problems. If I were to seek information from a department by e-mail, how would I deposit the fees asked per page for the information that I seek. Secondly, how would I know that 30 days have passed, since there would be a gap between receipt of the question and the money?

Wajahat Habibullah: There are no problems. If you send your request for information by e-mail, in such case you can ask the respective department how you could make the payment, either to the bank or the local registry, but such logistics are to be worked out by the government departments. The time of 30 days would be counted from the day, at which the government department from which you have sought information receives money. These are small procedural problems which should not be a hurdle in achieving the larger goal.