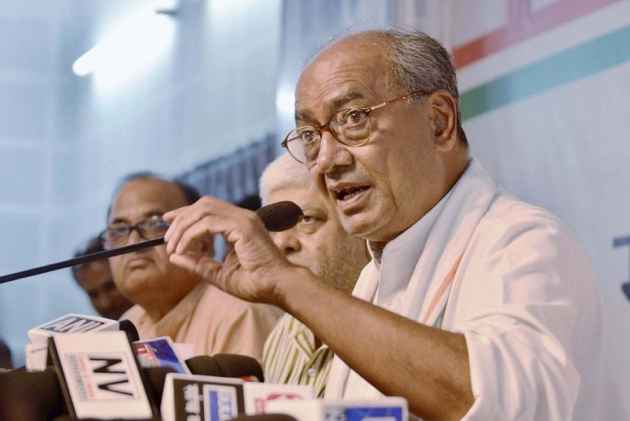 Joining the chorus of anti-Padmaavat protests, Congress leader Digvijaya Singh said films which hurt sentiments of religion or caste should not be made.

Talking to media here on Wednesday, he said, "If a film is different from history and hurts sentiments of people of a particular religion or community it should be best avoided to be made."

A school bus was attacked in Gurgaon, a fringe outfit in UP declared a bounty on Deepika Padukone's nose while roads were blocked at many places as violence spread to several states a day ahead of the release of Sanjay Leela Bhansali's 'Padmaavat'.

"There will never be a cause big enough to justify violence against children. Violence and hatred are the weapons of the weak. The BJP's use of hatred and violence is setting our entire country on fire," read the Congress President's tweet.

Karni Sena members protesting the movie allegedly damaged two state roadways buses in Jaipur and blocked a road in the city's Kalwar area while scores of activists were held in Mumbai and Nashik.

A bus was torched and a highway blocked in Haryana's Gurgaon where protesters violated prohibitory orders while the police had to use force to disperse an agitating mob in Lucknow.

In Gujarat, 118 people have been arrested so far for damaging public property during protests against the film, said in-charge Director General of Police Pramod Kumar.

Over 20,000 policemen as well as paramilitary personnel have been deployed across the state, he said.

"During protests, 21 state transport buses were either vandalised or set ablaze. Till now, we have arrested 118 people and detained another 300," the DGP told reporters in Gandhinagar.

Gujarat Education Minister Bhupendrasinh Chudasama and Minister of State for Home Pradeepsinh Jadeja held a meeting with representatives of various Rajput organisations in Gandhinagar to seek their support in maintaining peace.

With the fringe outfits opposing the movie remaining defiant, the Multiplex Association of India, which represents about 75 per cent of multiplex owners, said the film would not be screened in Rajasthan, Gujarat, Madhya Pradesh and Goa.

"We have decided not to play the film in four states — Rajasthan, Gujarat, MP and Goa -- as the local management has told us that the law and order situation is not conducive," Deepak Asher, president of the association, told PTI.

Rajasthan Home minister Gulab Chand Kataria said no theatre in the state is ready to screen the movie.

The film, however, found support in West Bengal Chief Minister Mamata Banerjee who said she will be happy if it is screened in the state as the Supreme Court order must be respected.

"It is a film. The name of the film has also been changed. The states where trouble broke out are ruled by BJP," she told reporters at the state secretariat in Kolkata.

The film's lead actor Ranveer Singh said he is proud to feature in a movie, the whole country can take pride in.

Ranveer, who will be essaying the character of Alauddin Khilji in the period drama opposite Deepika Padukone, who plays Queen Padmavati, tweeted, "For me, the sheer toil of a film's team has translated as magic on the big screen. And today on the eve of the release of a beloved film, I wish you all a Happy Republic Day in advance and invite you all to the cinema halls."

"I am proud to be a part of a film that our while country can be proud of. Jai Hind," he wrote.

Gurgaon, meanwhile, witnessed one of the most shocking incidents, when a mob in its frenzy attacked a school bus.

When he did not comply, they pelted the vehicle with stones. A school bus staffer asked the kids to crawl under seats for safety and directed the driver to not stop it, Ravinder Kumar, PRO, Gurgaon Police told PTI.

"The terrified kids cried for help. Fortunately none of them was hurt in the attack," Kumar said.

In Uttar Pradesh's Kanpur, a fringe outfit, the Kanpur Kshatriya Mahasabha, announced a cash reward for anyone who chops off actor Padukone's nose. Padukone plays legendary queen Padmavati in the film.

"We have collected crores of rupees from Kanpurites to be given as reward to anyone who will bring the chopped nose of Deepika Padukone," its president Gajendra Singh Rajawat told PTI in Kanpur.

In Madhya Pradesh's Ratlam, 27 women members of Rajput Karni Sena submitted letters to the district administration urging President Ram Nath Kovind to stop the film or permit them to end their lives.

"We demanded that the president should either grant permission to us to embrace death, as we are not able to protect the honour of Rani Padmavati, or else stop the movie from release," Rajput Karni Sena's Ratlam district women's wing vice president Mangla Deora said.

A theatre was vandalised in Jammu while there were protests in Gorakhpur also.

As protests raged, a defiant Shree Rajput Karni Sena, which has been spearheading the opposition to the flick, sought to pin the blame on director Bhansali.

The fringe outfit's chief patron Lokendra Singh Kalvi insisted that a 'Janta curfew' will be imposed on theatres that screen the movie.

He claimed that Shiv Sena leaders had assured the Karni Sena of support on the issue in Maharashtra.

Kalvi alleged that a dream sequence between the characters of Alauddin Khilji and Rani Padmavati existed in the controversial film, which, he said, was "intolerable".

"Those who watched the film on the invitation of the censor board a few days back have said that there is a dream sequence between Alauddin Khilji and Rani Padmavati in the film. We have been demanding that there should be no dream sequence and no romantic scene between the two," he said at a press conference in Jaipur.

The filmmakers had assured in the past that no dream sequence exists in the movie. There is no such sequence in the movie, according to a PTI journalist who has seen the film.

Kalvi also claimed that a section of media had wrongly reported that members of the Karni Sena had seen the film yesterday.

"This is not true and we are firm on our stand against the film," he said.

Striking a defiant pose, the Karni Sena leader said that he and other outfit leaders may be arrested and bullets fired but the protest would continue in states like Rajasthan, Haryana, Uttar Pradesh, Gujarat, Maharashtra and Madhya Pradesh.

The film, starring Padukone, Shahid Kapoor and Ranveer Singh, is based on the saga of the 13th Century battle between Maharaja Ratan Singh of Mewar and Sultan Alauddin Khilji.

The Supreme Court had paved the way for its nationwide release after some states issued notifications banning the film. The movie, earlier named 'Padmavati' and slated for a December 1 release, will now hit theatres worldwide tomorrow.