They come in cars, many on tractors and wagons, few on motorcycles. Tractors are also seen with trailers carrying wheat and vegetables. 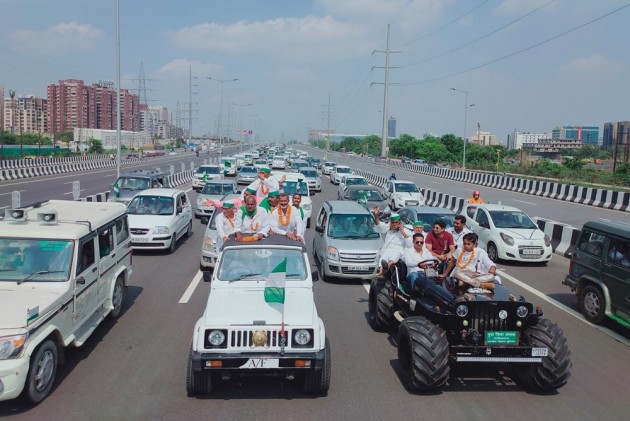 The number of protestors at Delhi’s borders is increasing each day with the joint platform of farmer unions set to mark their seventh months of sit-in demonstration on Saturday, June 26.

Thousands of them are already sitting at the borders in solidarity against the Centre’s three agricultural reform laws – mainly at Singhu, Tikri and Ghazipur. The sit-in demonstration began on November 26 last year.

They come in cars – some in compacts, others in fancy SUVs – many on tractors and wagons. Few even on motorcycles. Then there are a trail of tractors pulling trailers of wheat and vegetables.

“There are over 40 trailers, full of wheat, on way to the Singhu border so that the protesting farmers get freshly-ground flour for their bread every day,” shouts Abhimanyu Kohar of Samyukta Kisan Morcha (SKM) at his companion recording a video. He has to raise his voice over the din of slogans and the patriotic songs being played through loudspeakers.

SKM is the umbrella organisation of some 40 farmer unions, many of which in turn comprises several smaller organisations.

Many participants – in their white cotton long shirt, ‘dhoti’ and headgear – carry the tricolour.

The surge in their numbers is a result of the SKM’s schedule drawn to allot specific days to certain districts to send groups of farmers to the protest sites.

For example, the Ghazipur Morcha has divided each month into 10 parts where representatives from a cluster of blocks will spend at least three to five days during the time allocated for them.

While the numbers help boost their morale, concerns are being raised over the spread of Covid infection as they huddle together.

However, union leaders claim there has been no such outbreak at any protest site.

The next leg of protests includes marking seven months of sit-in demonstration on June 26 as ‘kheti bachao, loktantra bachao diwas (save agriculture, save democracy day)’.

Farmers in States and Union territories have been asked to collect at a scheduled point in their respective capital cities and proceed together on a ‘rosh (protest/resentment) march’ towards the Governor/Lieutenant Governor Residence on foot.

“A protest letter addressed to the President will then be handed over to Governors in States and Lieutenant Governors in Union Territories,” said Kohar in his address.

“The President is the First Citizen and the guardian of Constitution; we will request him to direct the (Union) government to address our problem,” he added.

On June 30, SKM intends to commemorate the Santhal rebellion of 1855. Also known as ‘Hool’, the rebellion was held in present-day Jharkhand against the East India Company as well as then zamindari system.

Included in SKM’s schedule are also protests at states like Punjab and Chhattisgarh, as well as the ongoing ‘social boycott’ of ministers in Haryana.

The Haryana government has already raised concerns over law-and-order problems. There have already been several standoffs between farmers and the police in the state. The latest being at Tohana in Fatehabad district and in Panchkula.