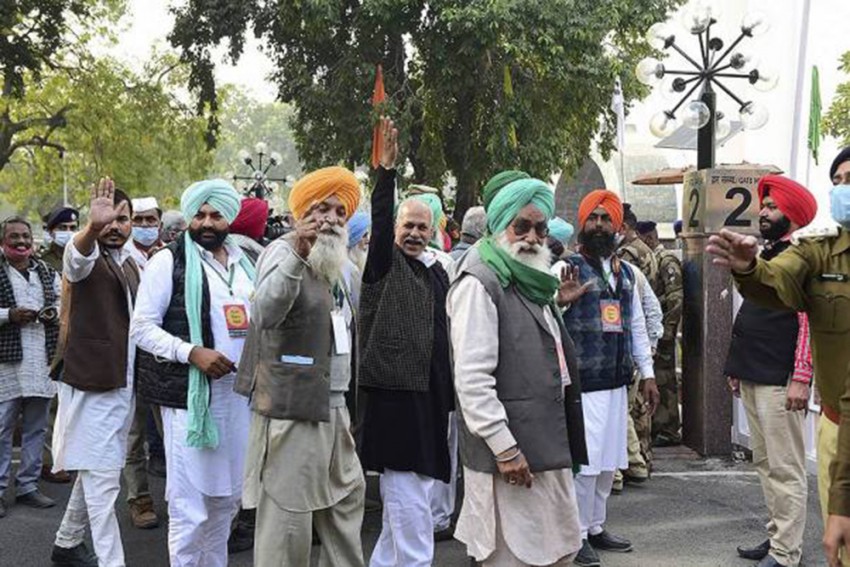 Leaders of various farmer organisations arrive at Vigyan Bhawan after the Central government invited them to hold talks, as they continue their agitation at Delhi border points against the new farm laws, in New Delhi.
PTI
PTI 2020-12-01T17:55:40+05:30 Farm Talks Deadlocked, Another Meeting On December 3 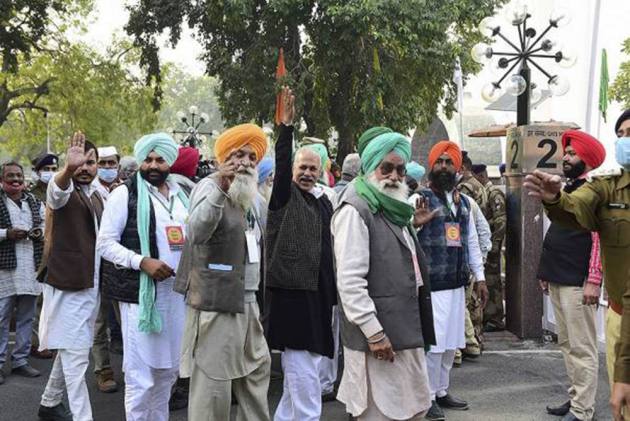 The government on Tuesday offered to set up a committee to look into the issues raised by farmers protesting against new farm laws, as three Union ministers and senior officials met representatives of 35 agitating organisations.

Bharatiya Kisan Union (BKU) president Joginder Singh Ugrahan said that the meeting with the Centre was inconclusive adding that the government has called for another meeting with various famer unions on December 3.

Meanwhile, government officials said the Centre will continue holding talks with the farmers, adding that next round of talks have been scheduled for Thursday.

"We had a detailed discussion. We will meet again on December 3. We suggested them to form a small committee, but they said they all will be present in the meeting. So, we agreed to that," Union agriculture minister Narendra Singh Tomar told PTI after the meeting.

When asked why the government was holding a separate discussion with Bharatiya Kisan Union (BKU) chief Rakesh Tikait, the minister said, "They have come to us, so we are holding talks with them as well. We are ready to discuss with all farmers."

Tomar also said that the government has urged the farmers to point out their specific issues with the new laws and said the government will address those concerns. "If they have any specific issue with any clauses, let them point out. Let them put their views, we will look into them," he said.

All farmers’ representatives were unanimous in seeking repeal of the three laws that they have been terming as being against the interest of the farm community. "The farmer's organisations rejected the government's proposal to form a five-member committee to look into the issues related to the new farm laws," Roopsingh Sanha, member of Bharat Kisan Union (Ekta Ugrahan) told PTI.

However, according to sources, the government is firm in its stand that a high-level committee must be formed to look into the issues and wanted the farmer representatives to further consider the proposal.

Sources said the ministers were of the view that it was difficult to reach a decision while interacting with such large groups and therefore they suggested meeting with a smaller group, but farmer leaders were firm that they would only meet collectively.

Union leaders said they feared the government might be trying to break their unity and the momentum of their protest.

The protesting farmers have expressed apprehension that the Centre's farm laws would pave the way for the dismantling of the minimum support price system, leaving them at the mercy of big corporates.

The government has maintained that the new laws will bring farmers better opportunities and usher in new technologies in agriculture.

For the meeting at Vigyan Bhawan here, Union agriculture minister Narendra Singh Tomar was accompanied by railways and commerce and industry minister Piyush Goyal and minister of state for commerce Som Parkash, also an MP from Punjab.

“We are ready for a discussion to resolve their issues. Let's see," Tomar had told reporters as he arrived for the meeting.

He said the government will arrive at a solution after hearing the representatives of the farmer organisations.

Heavy security arrangements were in place around the meeting venue.

Peaceful sit-ins by farmers, mostly from Punjab and Haryana, continued at the Singhu and Tikri borders with no untoward incident reported after Friday's violence, while the numbers of protestors swelled at the Ghazipur border on Monday.

The Opposition parties too stepped up the pressure, asking the Centre to "respect the democratic struggle" of the farmers and repeal the laws.

An earlier meeting on November 13 had failed to give any breakthrough and the next one was originally scheduled for December 3, but it got advanced due to the ongoing protests on Delhi borders.