Far Away In Delhi, How A Kerala Temple Serves Southern Cultural Flavour

The Just-concluded Uttara Guruvayur annual festival gives sight to a range of God’s Own Country’s traditional, classical and contemporary performing arts to Delhiites over eight days. A panoramic view: 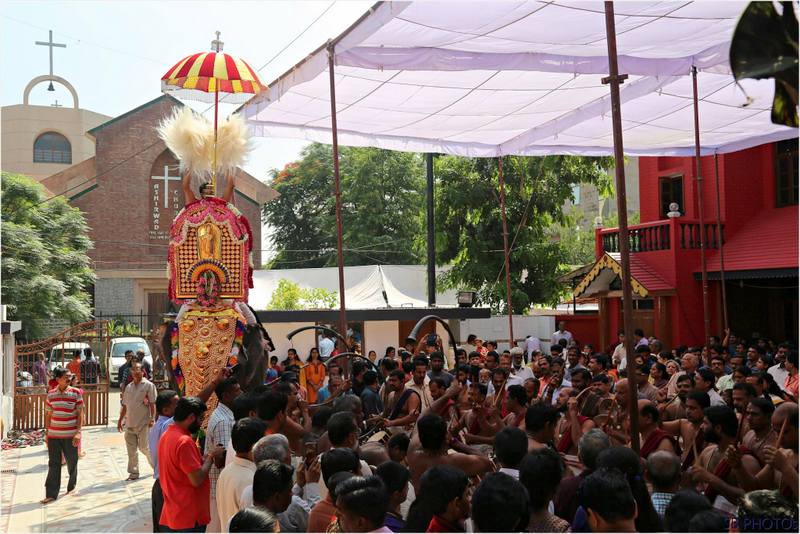 Just as the eight-day temple festival’s concluding ritual came to end, a bell tolled for more than a minute. Only that it was from just across the lane, where a church had just wound up its Sunday mass.

One commonality the two Delhi shrines shared was that they are run by people from faraway Kerala. More pronounced was the tacit message—of communal harmony and peaceful coexistence.

Curtains rung down on the 28th ulsavam at Uttara Guruvayoor east of the Yamuna in the national capital when the chief priest held the Srikrishna idol and took a dip in the holy tank alongside the gateway of the temple. As the devout watching the whole scene on a sunny forenoon early this week chanted prayers evoking the Hindu god, the sexton at the St John’s Orthodox Church coincidentally did his customary job that marked the end of liturgical service and saw the followers of Jesus come out in a quiet queue.

All this on August 28, when their city and several other parts of north India were reporting violent clashes in the aftermath of the arrest of a religious cult leader, against whom the trial court subsequently passed a verdict of sentence to 20 years of imprisonment.

The temple, on its part, organised the August 20-27 festival, typically with cultural events much beyond the set of tantric rites. For the average person (Malayali or otherwise), it was another window to take a peek at an array of traditional as well as classical arts besides new-age forms belonging to the cosmopolitan state along the Arabian Coast down-country. For instance, three shows of thayambaka on as many evenings at the temple precincts. The chenda drum concerts, each lasting no less than 90 minutes, was presented in ‘solo’ as well as ‘double’ formats, to the accompaniment of a couple of other ethnic instruments. Star drummer Kalpathy Balakrishnan regaled the audience with a two-hour thayambaka on the penultimate evening, while the earlier such chenda concerts were by the renowned Payyavoor Narayana Marar (August 23) and younger Santhosh Marar and Sathish Marar (August 20) from Neeleswaram in north Malabar. If the opening day’s cultural events were capped by a two-hour Kathakali night (story: Rugminiswayamvaram) from 9 pm, there were even ‘warm-up’ programmes to the festival. Thus, on the eve of the uslavam flag-hoisting was staged Ottan Thullal, a folksy one-man narration of a Purana story with verses sung by the costumed dancer and repeated by a background musician to the beats on the mridangam played by a percussionist. On August 19 forenoon, young Kalamandalam Nandakumar enacted dramatic scenes from Kalyanasougandhikam, where Pandava prince Bhima sets out to fetch a fragrant flower for his wife Draupadi, and stumbles upon his elder brother Hanuman up the verdant forest. That evening saw cinema-serial actor A.K. Anand present a ballet titled ‘Kumbhakarnan’. Indian mythology continued to thematically flavour the festival as the week saw a folk art named Kurathiyattam (focusing on the Shiva-Parvathi relation) and, two days thence, a Chakiar Koothu, where the lone actor is a jester, who verbally narrates a purana episode seasoned with social and political satire stretched to contemporary life. Edanad Rajan Nambiar, the artiste, accompanied by his son Yadu Krishna on the pot-drum called mizhavu, subsequently introduced a recent book of his essaying the mysterious absence of Radha in the Bhagavatam that is centres around her lover Lord Krishna. Copies of the printed work were sold out in no time after the show.

Much to the curiosity of the temple-goers was a single-string instrument concert that generated classical Carnatic as well as modern devotional songs. Kavil Unnikrishna Variar used a polished coconut shell as the resonator for his lowly kudukka veena that brought out complicated Dravidian gamakas and a range across three octaves in his August 25 kacheri. From Variar’s Kochi, the kaleidoscope jumped to upstate Kannur that evening three priests from Payyannur carried deities atop their crowned head and danced in accordance to the beats on the chenda by a team of drummers assisted on the ilathalam cymbals. Analakkad Illam Madhavan Namboothiri and the others also took a series of circumambulations as part of a Thidambu Nrittam within the walls of the temple in their performance that last for one-and-a-half hours.

The concluding day’s evening, too, was steeped in bhakti music when Moozhikulam Harikrishnan presented a vocal concert in Kerala’s indigenous Sopanam style that largely banks itself on plain notes and follows the ashtapadi literature of Gita Govindam composed in Sanskrit by 12th-century poet Jayadeva in the eastern part of the country. The young singer set the time on his small gong, while Kavil Ajayan played the handy edakka. That hour-glass shaped drum always won the admiration of the listeners when the festival routinely staged the night panchavadyam orchestra comprising five kinds of instruments lined up before a caparisoned elephant. Those 45-minute harmony of instruments like timila, maddalam, kombu and ilathalam (besides edakka) were led by senior percussionist Kuttanellore Rajan, while the morning parikramas had their focal round sounded by the chenda melams. The festival also featured a dance show, a violin trio concert, an instrumental fusion, serpent-invoking pulluvan paattu songs, a session on drawing Kerala folklore characters, the sing-and-say Kathaparasangam and even a magic show.