It’s summer upcountry, and veteran artist Jatin Das has put on display at IGNCA a portion of his collection of hand fans from across the world. A peek: 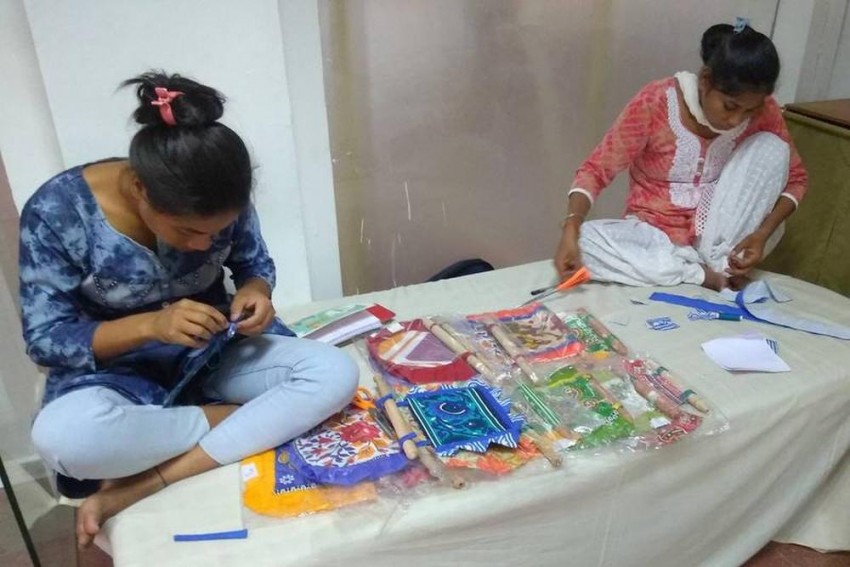 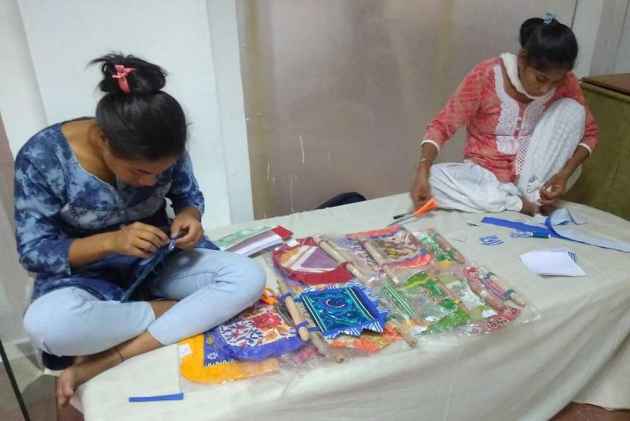 The air-conditioned gallery houses no less than 500 hand fans, each of which seems to be revelling in tales about their essentiality in a bygone era—but then that is only way of looking at it. This is India’s first summer after all its villages got electricity, yet that doesn’t mean that a chunk of the tropical country’s people has stopped using what is widely called the pankha.

Delhi, which is holding a unique exhibition of hand fans, received rains this weekend, adding moisture to the hot air and making the weather sultry. Today, as the venue—Indira Gandhi National Centre for the Arts (IGNCA)—held a fan-making workshop as part of the month-long show, visitors at the twin halls could have sensed the acuteness of an irony: pankhas may be objects of very mundane use, but they bear a high level and wide range of visual beauty.

And that’s the case throughout the world. For, as the title of the May 26-June 24 exhibition ‘PANKHA: A Collection of Hand Fans from the Indian Subcontinent and Beyond By Artist Jatin Das’ suggests, the items on display are not just from a country or two. Coming as a bigger surprise is that the whole of them form a part of a collection by the veteran painter-sculptor from J.J. School of Arts, Mumbai. 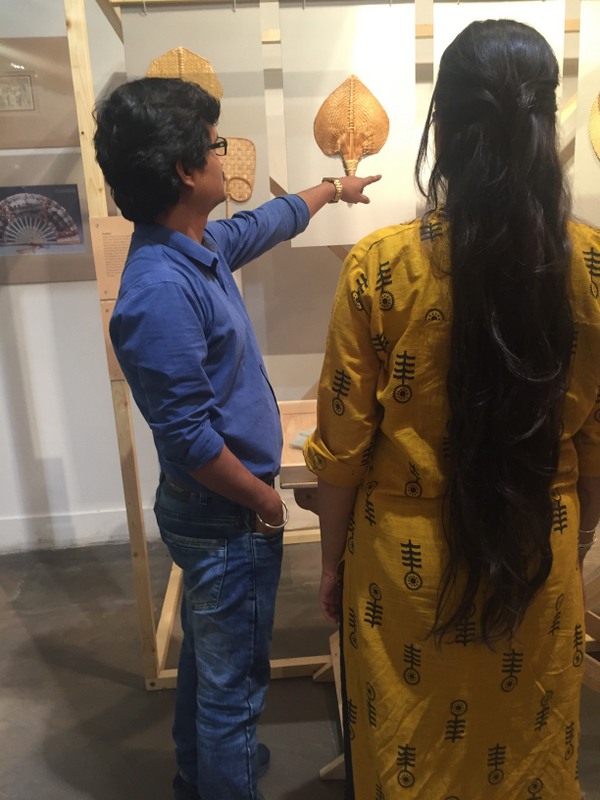 The interest in gathering hand fans from across the globe started with the Orissa-born Delhiite four decades ago when a friend gifted Das a pankha. Today, the 77-year-old has roughly 8,000 fans—as his actress daughter Nandita Das estimates—of various shapes, material and hues both far and near India and from the remotest parts of his country. “The pankhas have higher intimacy quotient vis-à-vis the electric fans,” notes Jatin, who has been into art in a big way for the past half a century.

The fans exhibited at IGNCA are from different parts of India besides also from Sri Lanka, Indonesia, China, Japan and, from another continent, Africa. “Each fan here has a sense of character and the expression of the region it is from,” points out Jatin’s son, Siddhartha Das, who has curated the exhibition.

The display focuses at mapping the fan culture and comparing differences and similarities of customs across the globe. Supriya Consul, who is programme director at IGNCA’s Kaladarsana (unit for exhibitions), says the pankha is a dying craft that needs to be put out for people to enjoy the richness of this object. “We want to preserve the past, as people should be able to visit the lives of their ancestors,” she adds. 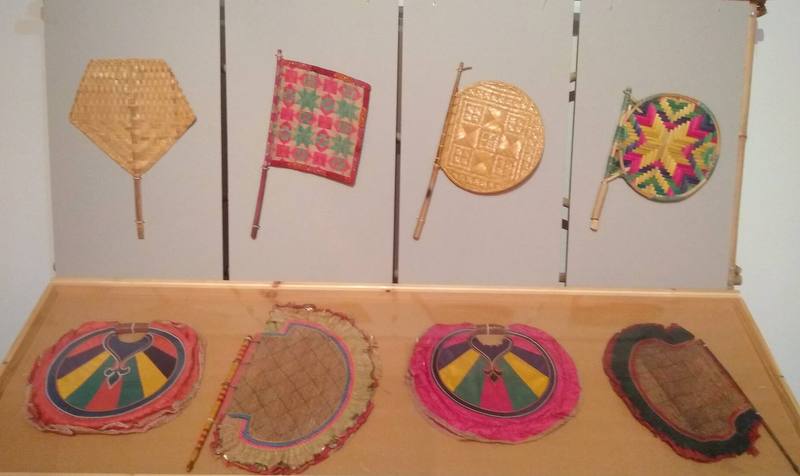 True, the more ornate ones at the IGNCA show pertains to a particularly upper stratum of society of the yore, but then there are even more number of simpler ones—say, those made of palm-leaves for simply fanning away the summer blues. The Spartan-ness gains a richness in colour when it, for instance, comes from Japan. The Far East country has a variety of them comprising folding fans called uchina that were made with bamboo and paper. Most of these papers were flamboyantly colored.

Fans from Bali in Indonesia are made to match the outfit of the user performing dance, apart from just fanning away the heat. These fans also have a tassel frill that creates a fluttering effect during the performance. Ivory-handle fans look bold and sophisticated with their creamy texture. Many others have an accent on feather detailing, while some bear bright colors and are emblazoned with loud gems.

Phad community fans are those categories of pankhas that used to be for courtiers, even as some of them are decorated with mirror appliqué work. The palm-leaf fans are common among the many ravishing pankhas. There are also fans made of silver, besides sandalwood—ones noticed for their exceptional carving besides the fragrance and density. Some of the fans also made with khus roots that exude a pleasant smell when wetted, thereby also giving in refreshing breeze. 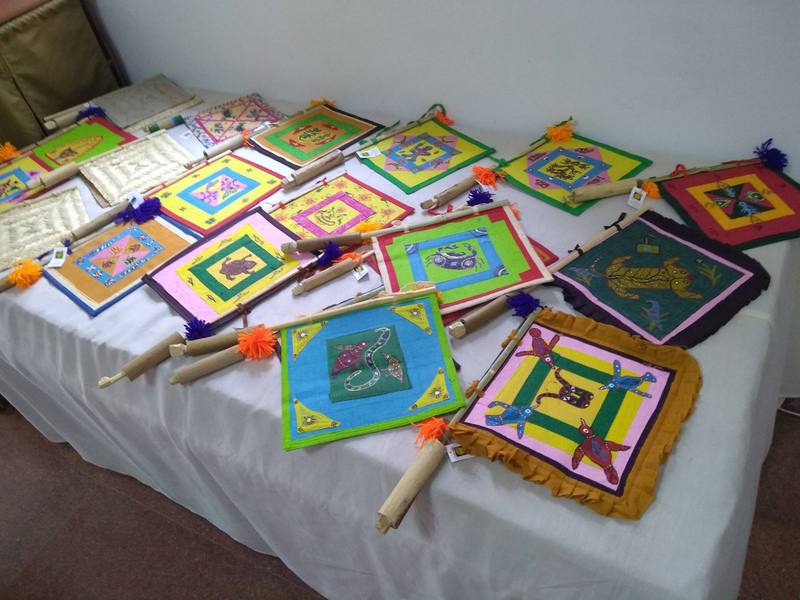 Another highlight of the exhibition was the ceremonial fan from Kerala, boasting of peacock feathers. The fans by Alekh Baba monks of Odisha form another variety, having been made of sturdy stem and palm-leaves. There is also the pantagruelian fan used as a shield for sun and rain.

On the corner adjacent to the exhibition sit a group of people making and selling fans. Young Shabnam, from Uttarkhand, has travelled all the way to the national capital to sell her fans that are used in her hilly village during summers. “While it gets warmer in this Himalayan region, people use these fans made of wooden handles and colourful clothes called bhenis to keep themselves cool,” informs the 20-year-old artiste.

A group of men from Assam were making their traditional Northeast fans made of bamboo and cane. Called bisoni, these are used in the villages far and near Guwahati during summer power-cuts of today. Though the artisan’s craft in the metropolitan regions is slipping away into the dust of time, these villages provide them with a steady business. 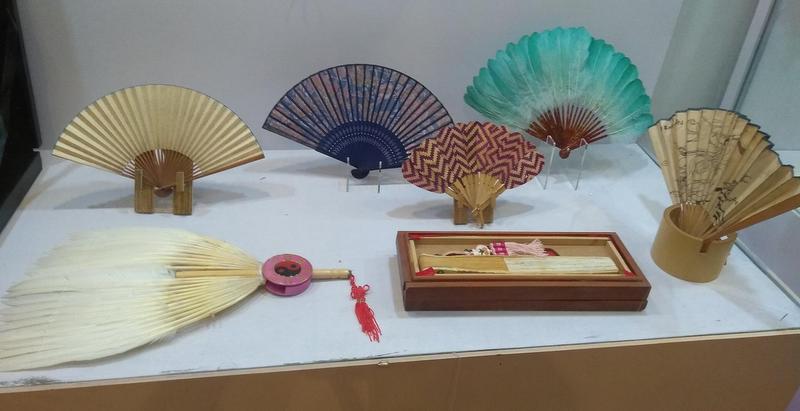 Inquisitive minds keep travelling along the gallery, studying the intricacies of each fan. Aarti Balaji, an undergrad from Symbiosis, is impressed. “The diversity that is brought under one roof is astonishingly good, and that also with simple object as a fan,” she notes. “And the fact that the artist mainly concentrated on the eastern region is beautiful as many of the contemporaries I see are western-bound.”

Ruchika Jain, who is a PhD scholar at IIT Kanpur, says the exhibition emphasises very well on culture. “All the same, I wish better contextualisation of the variety was put for us to have greater understanding about the fans.”

Delhiite Malayali Vijay Punnathur is impressed with the pankhas from almost all nooks and corners of the country, but regrets a “noticeable omission”: the paala vishari made out of arecanut palm frond from his native Kerala. “I carry fond childhood memories of this, as my father using a knife, used to carve out a simple vishari, which we used, as electric fans were a rarity and luxury during those days,” he notes in a Facebook post.

Deepika Mehragmail, who is a teacher, says, the exhibition gifts amazing perspectives to each and helps understanding and analyse the cultures and the past strata of society. The show also features a movie playing in two corners of the gallery. Their theme: the making of pankhas. For many, these objects have come back from time to be a source of history and inspiration.