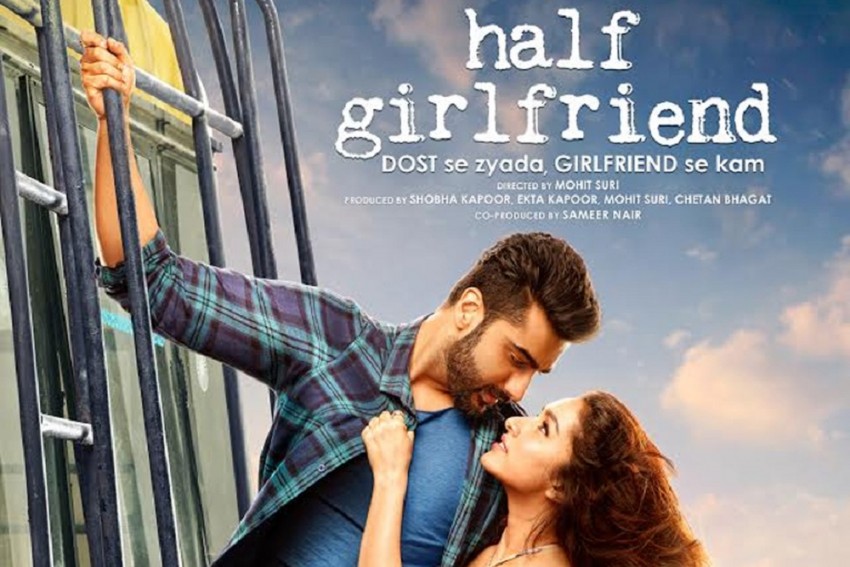 A still from Half Girlfriend
Twitter
Giridhar Jha May 22, 2017 00:00 IST Every Chetan Bhagat Cannot Be Salim-Javed In Bollywood 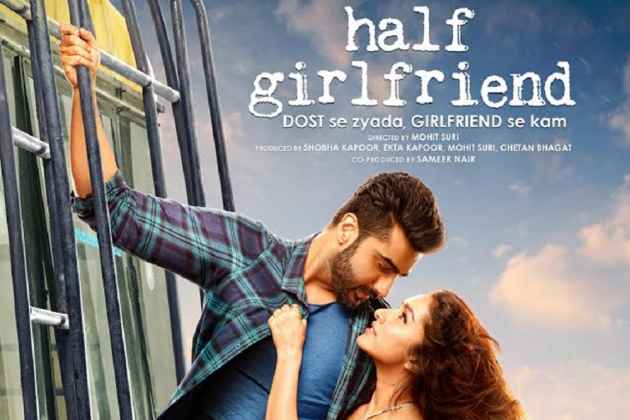 Writing a best-selling novel is one thing and making good, entertaining cinema out of it quite another. The Bollywood adaptation of Half Girlfriend has once again underlined the fact that every Chetan Bhagat cannot be a Salim-Javed.

Bhagat’s latest film depicting the tale of a Bihari youth, who wallows in self-pity over his inability to converse in English in his pursuit of love in a metropolis, has done well at the box office in the opening weekend, collecting more than Rs 32 crore despite bad reviews. But it remains an example of how a novel should not be adapted for a feature film.

The Arjun Kapoor-Shraddha Kapoor starrer is cliched and predictable not only for those who were brave enough to venture into theatres in spite of having read his pulp paperback but also for the ones who had not.

True, Half Girlfriend was not (in fact, never intended to be) a novel with great literary merits in the first place. Bhagat has had no pretensions about it. It was at best a quickie dished out by a writer-in-a-hurry with a perceived talent of story-telling for the medium of cinema. But, as one sits through director Mohit Suri’s 135-minute-long tedious misadventure, only one question comes to mind: which was worse – Half Girlfriend as a book or as a movie?

The film is replete with stereotypes– the male protagonist as a bumbling Bihari, the female lead a loner from a richie-rich but love-less family. It even has a trite climax showing a reunion of separated lovers, just the way it has been picturised ad nauseam in film after film in the past. What the movie lacks in the most is a taut screenplay, with plausible twists and turns, to hold the audience together.

Way back in 1965, director Vijay Anand had tweaked RK Narayan’s acclaimed novel, The Guide, while making a Hindi film starring Dev Anand and Waheeda Rahman on it. In fact, Vijay’s 'temerity' to do so had raised the hackles of the celebrated novelist but, at the end of the day, it turned out to be an all-time classic which has been on the most-favourite list of the Indian cinephiles of all hues since its release 52 years ago.

Come to think of it, even Dev Anand was initially skeptical about his younger brother’s derring-do but Vijay knew what he was doing. The English version of the film, scripted by the great American novelist Pearl S Buck and directed by Hollywood’s Ted Danielewski, had faithfully stuck to Narayan’s masterpiece, but it flopped at the international box office. Vijay knew it instinctively that the novel, howsoever engrossing in print, needed to be changed a bit for the Hindi film audience.

Being the writer and even co-producer of Half Girlfriend, Bhagat, therefore, should have worked harder with his screenplay writer to turn it into an engaging film about a small-town boy who wins over his ladylove without having to change himself, with all his follies and foibles, accents and complexes. But the loose screenplay makes it look like a tiresome journey of the listless protagonists.

Bhagat, a publishing industry phenomenon, had debuted in Bollywood by writing the story, screenplay and dialogue of director Atul Agnihotri’s Hello in 2008. That movie, despite being a faithful adaption of his 2005-bestseller, One Night @ Call Center, had bombed at the cash counters. Later, an Aamir Khan-starrer, 3 Idiots (2009) based on his maiden novel, Five Point Someone rewrote box-office history, though his name did not even appear as the story writer in the main credit titles of the blockbuster.

It was director Rajkumar Hirani and Abhijat Joshi who reworked the script and walked away with all the credit. Bhagat initially cried foul but the film makers were quick to point out that the final script had little to do with the novelist’s original work. In short, they took the idea of the film from Bhagat’s book but let their own team to develop it suitably for its cinematic version.

Wiser from his experience, Bhagat later worked with co-writers on the scripts of the next two films based on his books: Kai Po Che! (2013) on Three Mistakes of My Life and 2 States (2014) on the novel of the same name, which turned out to be commercial successes. They had been adapted suitably which is not the case with Half Girlfriend.

Cinema is essentially a visual medium and its narrative is vastly different from that of a novel. In a book, the author may require the power of words to describe something but on screen, a shot without even a single dialogue can make a big difference. The picturisation of Rakhee’s death inShakti (1982) and the killing of Sachin in Sholay (1975) are the two examples where silence speaks louder than words on screen.

Iconic script-writers Salim-Javed who had conceived those scenes, of course, knew when to use the spoken words and when not. Even though they were considered almost infallible at the prime of their career, their biggest ability was to see their movies as a complete package. Whenever they noticed that something was missing, they reworked the script to make up for the missing elements. The famous scene in Trishul which shows Amitabh Bachchan landing at a goon’s place with an ambulance or, for that matter, the song, Khaike Paan Banaraswallah in Donwere both incorporated after completion of those movies as per the original scripts.

Salim-Javed were no Chetan Bhagat in their heyday. None of them ever wrote any best-selling novel but they knew the medium of cinema like the back of their hand. Bhagat is a commercial story-teller in his own right as well but he probably needed somebody of Raj Kumar Hirani’s calibre to translate his ordinary love story into an extraordinary movie.

Half Girlfriend will go down in the history of Bollywood as a barely watchable movie regardless of its outcome at the box office. That will certainly not be a laurel for somebody proclaimed as the highest-selling author in the country.

A Time When Films Mattered More Than Clothes At Cannes