Book Review | 'The Nutmeg’s Curse: Parables For A Planet In Crisis' By Amitav Ghosh

Amitav Ghosh connects the origins of our current climate crisis to Western colonialism's ruthless exploitation of human life and the natural world in this ambitious read.

Amitav Ghosh's latest book traces our contemporary planetary crisis back to the discovery of the New World and the maritime passage to the Indian Ocean. It is a remarkable mix of history, essay, testimonies and polemics. The Nutmeg's Curse argues that today's climate change dynamics are based on a centuries-old geopolitical system built by Western colonialism. The now-ubiquitous spice ‘nutmeg’ is at the centre of Ghosh's narrative.

The nutmeg's history is one of conquest and exploitation, both of human life and of the natural environment. The narrative of the nutmeg becomes a fable for our environmental catastrophe in Ghosh's hands, revealing how earthly materials such as spices, tea, sugarcane, opium, and fossil fuels have always been entangled with human history. Our predicament, he argues, is the outcome of a mechanical view of the world, in which nature is viewed as a resource for humans to exploit for their own interests, and not as a living force with agency and meaning.

Author Amitav Ghosh frames these historical stories in a way that connects our shared colonial histories with the deep inequality we see around us today, writing against the backdrop of the global pandemic and Black Lives Matter protests. 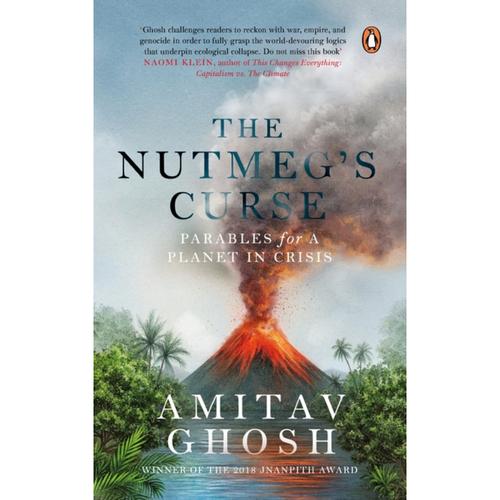 He also interweaves discussions on everything from climate change and the migrant crisis to the animist spirituality of indigenous communities around the world. The Nutmeg's Curse offers a sharp critique of Western society, and reveals the profoundly remarkable ways in which human history is shaped by non-human forces.

We also realise that book The Nutmeg's Curse reimagines modernity as a centuries-long campaign of omnicide against the spirits of the earth, rivers, trees, and even the humble nutmeg, while also making a passionate case for the critical importance of vitalist philosophy and non-human narrative. Climate change is considered in the West to be a technical problem that can be solved with clean technology. However, it is seen as a geopolitical and inequitable concern in the rest of the globe. Climate change geopolitics are never mentioned in meetings like the COP, which are focused on technocratic and technological solutions. That is, after all, the central idea.

Before the 18th century, every single nutmeg in the world originated around a group of small volcanic islands east of Java, known as the Banda Islands. As the nutmeg made its way across the known world, they became immensely valuable - in 16th century Europe, just a handful could buy a house. It was not long before European traders became conquerors, and the indigenous Bandanese communities - and the islands themselves - would pay a high price for access to this precious commodity. Yet the bloody fate of the Banda Islands forewarns of a threat to our present day.

Ghosh claims in his book that the nutmeg's traumatic journey from its original islands reveals a wider colonial mindset that justifies the exploitation of human life and the natural environment, which continues to lead geopolitics today.

According to Ghosh, the Banda islands were the only site on Earth where nutmeg was farmed prior to the 16th century. The Dutch then invaded the island in order to safeguard its production, killing thousands in the process.

He writes in the book -

“THE ISLAND OF LONTHOR is shaped like a boomerang, and it adjoins two other islands: Gunung Api and Banda Naira, a tiny islet that was already, in 1621, the seat of two massive Dutch forts. The three islands are themselves the remnants of an exploded volcano, grouped around its now-submerged crater. Between them lies a stretch of sheltered water that is deep enough to accommodate oceangoing ships. Anchored there on the night of April 21 is the fleet that has brought Martijn Sonck to the Banda Islands. On still nights sounds carry easily across this stretch of water. The rattle of agitated musket fire on Lonthor is clearly heard on the Nieuw-Hollandia, the flagship of the commander who has brought this fleet to the Bandas: Governor-General Jan Pieterszoon Coen. An accountant by training, Coen, at the age of thirty- three, has served as the governor- general of the East Indies for three years already. A man of immense energy, competence, and determination, he has risen through the ranks of the Dutch East India Company like a jet of volcanic ash. Known, behind his back, as De Schraale (“Old Skin and Bones”), he is a blunt, ruthless man, not given to mincing his words. In a letter to the Seventeen Gentlemen who preside over the Company, Governor-General Coen once observed: “There is nothing in the world that gives one a better right than power.”

Amitav Ghosh's The Nutmeg's Curse exposes the reader to a sprawling tale of capitalism and climate change told with excellent historical and cultural context.

When the nutmeg was discovered by the rest of the globe, European traders quickly conquered the islands, causing indigenous tribes on the Banda islands to pay exorbitant rates for the product. In his book, Ghosh argues that the nutmeg's voyage from its native Banda islands reveals a prevalent colonial attitude of exploitation of human life and the environment that persists today.

Amitav Ghosh has struck has deepened our understanding of the climate catastrophe once again. He disproves the concept of modernity, moves the blame away from capitalism, and takes you on an odyssey across space and time. The aim was to establish a monopoly on these spices, and the Dutch carried it to the next level. In the 16th, 17th, and 18th centuries, European colonists were totally responsible for the exploitation of the Earth's resources. The curses of these resources are destroying countries. Ghosh had earlier addressed climate change in his 2016 book The Great Derangement.

He further writes in the book "But such a right is impossible for the Bandanese to grant. How can they refuse to trade with their accustomed business partners, from shores near and far? The islanders depend on their neighbors for food and much else. Besides, the Bandanese are themselves skilled traders, and many of them have close links with other merchant communities in the Indian Ocean; they can hardly turn their friends away empty-handed. Nor would that make commercial sense, since the Europeans often don’t pay as well as Asian buyers. And the Bandanese, like most Asians, don’t find European goods particularly desirable: what are they, with their warm climate, to do with woolen cloth, for instance?
It would have been easier for the Dutch if the Bandanese had had a powerful ruler, a sultan who could be coerced into compliance, as had happened on other islands in Maluku. But the Banda Islands have no single ruler who can be threatened and bullied into forcing his subjects to obey the foreigners’ demands. “They have neither king nor lord” was the conclusion of the first Portuguese navigators to visit the islands, “and all their government depends on the advice of their elders; and as these are often at variance, they quarrel among themselves.”

This is not the whole truth, of course. The Bandanese have aristocratic lineages, as well as merchant families that possess great wealth and many servitors. It is a combative society, divided into walled settlements that sometimes fight pitched battles against each other. But no single settlement or family has ever subdued the entire archipelago; the islanders seem to have a deep- seated distaste for centralized, unitary rule." The book is an engrossing, panoramic history of colonialism's impact on the globe today, portrayed through the fascinating narrative of the nutmeg.

To fully comprehend the world-devouring logic that drives ecological collapse, Ghosh urges readers to confront war, colonialism and genocide. Although it is widely acknowledged that the climate issue is multifaceted, American cultural discussions about it are mostly focused on its scientific, technological and economic aspects.

Ghosh never fails to show us the mirror, whether it's the glorified traditions of omnicide, the moral vindication sought through religion throughout history, the morbid individualism imbibed as a virtue, the irresistible vanity of racial, classist, and casteist hierarchies, or the human audacity to claim victory over Nature. Ghosh has written a remarkable, visionary appeal to new forms of human life in the ‘Anthropocene’, with wide historical perspective and astonishing insight. This is a timely and compelling work.

Author Amitav Ghosh was born in the city of Calcutta in 1956. He spent his childhood in Bangladesh, Sri Lanka, and India. He studied at the universities of Delhi and Oxford, and in 1986, he wrote The Circle of Reason, the first of his eight books. Sea of Poppies, the first book in his Ibis trilogy, was a Man Booker Prize finalist. In 2018, he was awarded the prestigious Jnanpith Award. The Circle of Reason, The Shadow Lines, In An Antique Land, Dancing in Cambodia, The Calcutta Chromosome, The Glass Palace, Incendiary Circumstances, and The Hungry Tide are only a few of his works. Gun Island and Junglenama, are his most recent works.

(Ashutosh Kumar Thakur is a Bangalore-based Management Consultant, Literary Critic, and Co-director of the Kalinga Literary Festival. You can reach him at ashutoshbthakur@gmail.com.)