It is rumoured that actress Samantha Ruth Prabhu and hubby Naga Chaitanya are heading for a divorce. But amidst those reports, she took to social media to address Chaitanya’s father, superstar Nagarjuna, as father-in-law.

Telugu superstar Nagarjuna remembered his father, the legendary actor Akkineni Nageshwara Rao aka ANR on his birthday anniversary. He took to social media to post a video where he referred to his father as his inspiration and hero. At the end of the tweet, he put the hashtag #ANRLivesOn. This was coined during their film together Manam.

Seeing the post, Samantha Ruth Prabhu took to respond with a sweet post, “This is so beautiful.” She just tagged Nagarjuna in the tweet. Have a look: 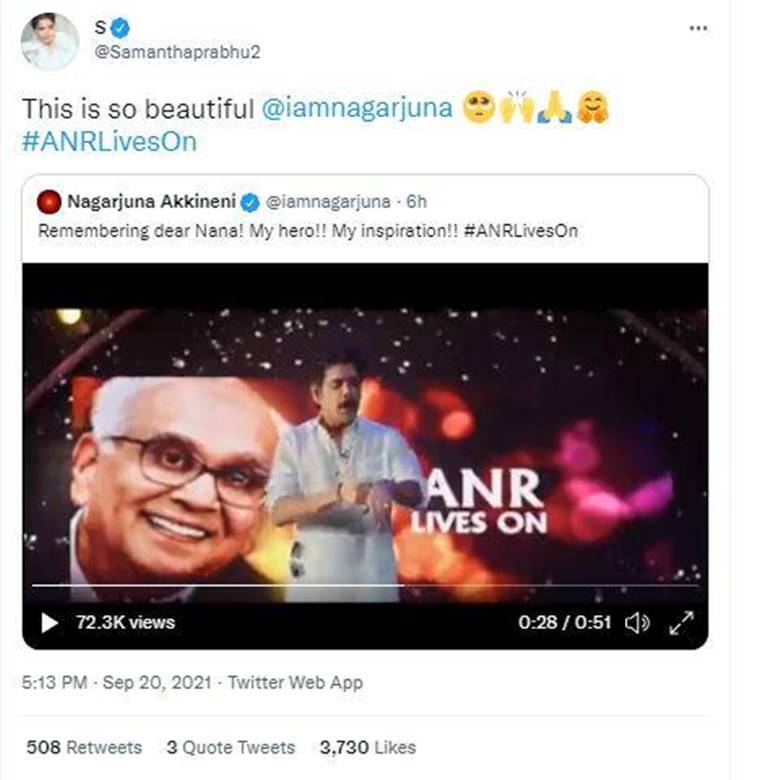 However, she was quick to realise that she had made some mistakes and deleted the post. She posted it again and this time she added the word “Mama” after tagging Nagarjuna. Mama in Telugu means father-in-law.

What is interesting to see is that the actress is alleged to be splitting over from her husband Naga Chaitanya, son of Nagarjuna. She even dropped the Akkineni surname from her social media pages and went back to adding Ruth Prabhu after her name. Neither Chaitanya nor Prabhu has spoken up about whether they’re heading for a divorce or not. However, there are hushed rumours in the film industry that the two had been taking marriage counselling and also had visited the family court.

With Prabhu calling Nagarjuna father-in-law again, does that mean things are finally getting back to the way they were before? Only time will tell.