ALTBalaji Apologises, Takes Down 'His Storyy' Poster After Being Accused Of Plagiarism 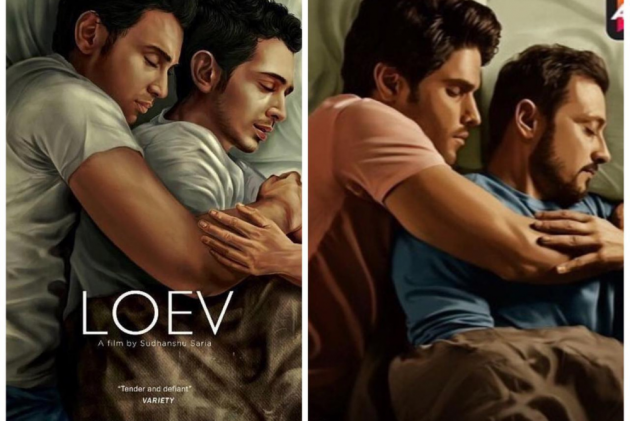 On Sunday, Producer Ekta Kapoor's streaming platform ALTBalaji apologised and removed the poster of the show "His Storyy" from its social media pages. The movie came after filmmaker Sudhanshu Saria accused that the poster was copied from the artwork of his film "Loev".

Saria took to Twitter, shared the poster of his acclaimed 2015 same-sex romantic drama and accused the streaming platform of plagiarising his artwork that featured the film's two leads lying in an embrace. Sudhanshu Saria bagged the National Award for best direction last month for his feature "Knock Knock Knock".

The poster of "His Storyy", shared by ALTBalaji on its social media pages, also showed the central characters in a strikingly similar position.

Saria called out the streamer for "blatantly" copying his poster and wrote the culture of plagiarising in artwork "must end."

Woke up to find that our painstakingly illustrated, original poster for @loevfilm has just been blatantly ripped off by the geniuses at @altbalaji @ZEE5Premium for their show #HisStoryy // Thread pic.twitter.com/ljQ9vNSa0a

In a statement posted on Twitter, ALTBalaji said the resemblance between the two posters cannot be passed off as a "mere coincidence."

"On the 9th of April, we released a poster of 'His Storyy' and were made aware of the existence of Sudhanshu's 'Loev' poster. The uncanny resemblance and similarity cannot be written off as a mere coincidence.

"It has been an oversight on part of our design team. For this we apologise," the statement read.

The statement came hours after filmmaker Vikramaditya Motwane lashed out at the streamer for continuing to display the poster despite Saria's allegations.

Motwane, who helmed "Lootera" which was backed by Kapoor's Balaji Motion Pictures, said the production house has a history of plagiarism and shared a poster of Kangana Ranaut from "Judgmentall Hai Kya", which was alleged to have been lifted from the artwork of Hungarian artist, Flora Borsi.

"Not only have you stolen somebody’s hard work and passed it off as your own, you refuse to acknowledge your folly, or apologise, or pull the material down. Shame," Motwane wrote.

ALTBalaji has now removed the said poster from its social media platforms.

The streamer said it respects the creativity of every designer and would "never intentionally lift their work nor disregard their talent."