England Kept On A Leash

Indian bowlers dealt crucial blows to smother a spirited England fightback led by Pietersen (64) and give the hosts a slight upper hand on a rain-marred day. 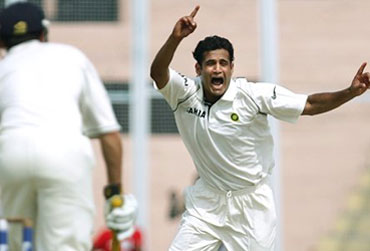 Indian bowlers dealt crucial blows to smother a spirited England fightback led by Kevin Pietersen and give the hosts a slight upper hand after the first day of a weather-marred second Test today.

Irfan Pathan picked two wickets in the morning before Anil Kumble and debutant paceman Munaf Patel scalped one each to reduce England to 163 for four in overcast conditions which cost 155 minutes of play in the day.

At stumps, declared nearly an hour before scheduled close due to bad light, Paul Collingwood was batting on 19 while skipper Andrew Flintoff was on four.

The Indians, playing with five bowlers, struck just when Pietersen was threatening to launch a counter-attack with an aggressive half-century.

The 25-year-old right-hander, who struck 10 fours and a six in his 108-ball 64, rallied England with two crucial partnerships for the third and fourth wickets with Ian Bell (38) and Collingwood.

He put on 81 runs with Bell for the third wicket and another 40-runs for the fourth with Collingwood but failed to build on his gutsy effort, being caught and bowled by Patel who celebrated his maiden Test dismissal by punching his fists in the air.

Patel, who looked ordinary in the first two sessions, bowled with a lot of purpose in his final spell and benefited from the fact that Kumble kept it tight at the other end.

The veteran leg-spinner, on his part, inched closer to the 500-mark when he picked his 497th scalp -- clean bowling Bell.

However, it did not turn out to be a very memorable first day for India's second youngest ever Test debutant Piyush Chawla who was hit for a huge six over mid-wicket by Pietersen and finished the day with figures of 5-1-20-0. 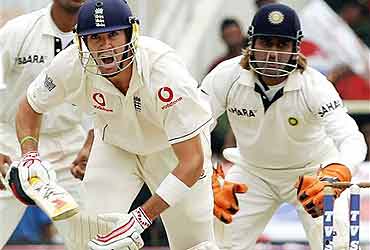 An entertaining post-lunch session saw the Indian bowlers engage themselves in a battle of attrition with the hard hitting Pietersen.

Pietersen slammed Kumble for two fours in one over to bring up his fifth career 50 and second against India.

Collingwood was more circumspect at the other end and even survived a scare when he almost played on a Patel yorker when on 13.

The success of the Indian bowlers meant Rahul Dravid would not be regretting much the fact that he lost the toss.

In fact, Pathan tasted blood with twin blows in the first session itself before Pietersen unleashed his pyrotechnics. The Ashes hero played true to his cavalier style and livened up the proceedings with his aggressive strokeplay.

The spunky batsman picked teenager Chawla for special treatment, slamming the debutant for a four to the third man fence followed by a huge six over mid-wicket in the bowler's second over, forcing Dravid to take him out of the attack.

But just when the visitors appeared to be cruising along nicely, Kumble struck for India.

Bell, desperate to make a mark after scores of nine and one at Nagpur, was foxed by a slower one from the Bangalore stalwart, who is now just three shy of the 500-wicket mark, to be clean bowled.

The 25-year-old Warwickshire batsman made 38 off 68 balls with six fours, and his partnership with Pietersen for the third wicket, worth 81 runs, came off 128 balls.

Earlier, India dropped VVS Laxman, Mohammad Kaif and S Sreesanth from the side that played in Nagpur, bringing in their place Yuvraj Singh, Patel and Chawla.

England made one change, leaving out Ian Blackwell to give seamer Liam Plunkett his second Test cap.

Pathan dealt the first blow off the fifth ball of the 11th over when he had Andrew Strauss caught by wicketkeeper Mahendra Singh Dhoni for 18 before returning to send back Alastair Cook (17) in his very next over.

Cook, the more confident of the two players following his century on debut in Nagpur, was trapped plumb in front, England sliding to 36 for two.

The visitors were off to a confident start with the left-handed pair of Strauss and Cook negotiating India's new ball bowlers -- Pathan and Patel with ease.

Strauss, the first batsman to be dismissed when he edged an outswinger from Pathan, struck one four in his 38-ball knock, and put on 35 runs for the opening wicket with the in-form Cook.