Ends Of The Spectrum

The moment you walk down the steps, you enter another century, another city, another country. And Delhizens become another people altogether.

As a dyed-in-the-wool cynic I never believed it would work: the Delhi Metro, I mean. Now, two or three years down the line, and especially since the line from the University to Connaught Place opened, I’ve become a firm acolyte and regular user. From my house, it takes five minutes to get to the station, and then eight minutes in the train, and I’m out in the very block in C.P. where I used to park my car, with normal blood pressure and time to kill. But now I find there’s something else bothering me. 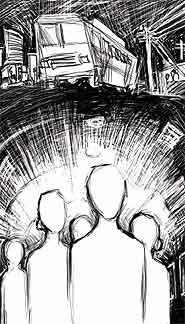 The stations are impeccable, right? The moment you walk down the steps, you enter another century, another city, another country. And Delhizens become another people altogether. The trains too are still gleaming brand new, and there’s not a speck of dirt on the floor, forget about the Delhizens’ trademark paan thook. And it doesn’t matter whether this is because the Delhizen is afraid that if he (or she) dares to litter or misbehave in the tiniest manner here, he would be summarily ejected into the stygian darkness of the tunnel outside. What does matter is that he or she is perfectly behaved, and should emerge from the ride an enriched soul. I mean, you can and should get used to a good thing... And you should start demanding more of the same, right?

So why do Delhi’s buses remain the symbol of everything that is primeval and uncivilised and completely hooligan? I pass a major bus stop en route to the entrance to the Metro, and by the time I’m at the entrance I’m sort of dazed. The buses (looking like badly opened sardine tins) come reeling round the corner from Boulevard Road, as if on amphetamines, shrieking like banshees—the ‘pilots’ hell-bent on cutting off the noses of the buses ahead of them, the conductors (usually about 15 years old) hanging out of the sides, banging away, yelling belligerently. The buses are without doors, of course; the first step is three feet off the ground, and they certainly haven’t been washed ever since they left the factory, except for daily sprayings of vomit, but who can blame the passengers? And the same people who use the Metro use these buses uncomplainingly. Hello, isn’t it time we made a connection? And realised that this is an affront to our self-respect—and for God’s sake we’re so hot on our beloved izzat!

What if Delhi’s buses were magically replaced by sleek modern buses with doors that hissed open, and conductors that looked like conductors and not juvenile delinquents, and drivers that ‘nosed’ the buses around, like London’s fabled (and now, alas, extinct) Routemasters...Would the Delhizen revert to his Metro-behaving mode? Probably.

But then, would it be India, where we allow everything—the good, the bad, the ugly, the hooligan, the monstrosity—to flourish cheek by jowl? Where you can experience extremes of human evolution within minutes of each other. (To rub it in, there are monkeys near the bus stop too!)