End Of The Road

Playing true to their current form, India continued with their agonising sequence of flops to allow the Aussie juggernaut to canter into the semi-finals with an emphatic six-wicket thrashing. 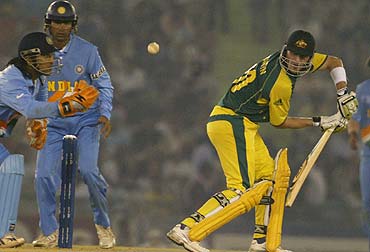 India suffered the ignominy of an early exit from the Champions Trophy after a six-wicket thrashing at the hands of Australia who romped into the semi-finals without much fuss at Mohali today.

The Indians managed to score 249 for eight on a good batting strip with Virender Sehwag (65) and Rahul Dravid (52) being the top scorers but the bowling lacked the sting to stop the awesome Australians from cantering to a facile victory with 4.2 overs to spare in the floodlit contest.

It was a painful knock-out punch for the home team who were expected to at least make it to the semi-finals since they were playing at home but the party will now carry on without the hosts.

The world champions had the game in control right through with useful contributions coming from captain Ricky Ponting (58), Shane Watson (50) and Damien Martyn (73 not out) which helped the team to overhaul the target with more than four overs to spare.

The victory ensured that Australia moved into the semi-finals as the champion team from Group A and will now take on New Zealand in the first semi-final here on Nov 1.

South Africa, who emerged as the champions in Group B, will clash with the West Indies in the second semi-final in Jaipur on November 2.

The final is scheduled to be held in Mumbai on Nov 5.

The Australians, who have never won the Champions Trophy, not only put themselves on course for breaking the jinx but also ensured that India's agonising sequence of flops continued to haunt them.

Required to score at five runs an over, the Australian innings got off to a flying start as the dangerous Adam Gilchrist and Shane Watson launched a blistering assault on the Indian pacemen who again were guilty of erring in line and length.

Irfan Pathan, who has been in woeful form in recent times, was again taken to the cleaners while the other new ball operator Munaf Patel was no less expensive.

A hushed silence descended in the fully-packed Mohali stadium as the two Australian openers quickly took the game under control with a barrage of strokes and raced to 61 in no time before the hosts had something to cheer about.

Paceman S Sreesanth, coming into the team for an injured Ajit Agarkar, provided the breakthrough by scalping the rampaging Adam Gilchrist with Suresh Raina bringing off a spectacular catch.

Shane Watson, who was bothered by cramps, and captain Ricky Ponting kept the good work going as the pair put on 52 runs for the second wicket which took the Australian total beyond the 100 mark.

Dinesh Mongia accounted for the dismissal of Watson with umpire Steve Bucknor ruling him leg before wicket much to the dismay of the batsman.

Ponting, who had not scored too many runs in the two earlier league matches, made amends by scoring a half century before falling prey to Sreesanth with Tendulkar snapping up the catch at slip. 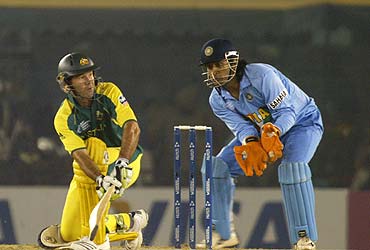 But Ponting had by that time put the world champions on the road to victory along with Martyn who produced some exhilarating strokes during his stay at the crease.

Earlier, electing to bat, the Indian batsmen put up an improved performance to score 249 for eight but it was not sufficient in the end.

Sehwag notched up his 24th ODI half century while Rahul Dravid (52) and Mohammad Kaif (30) were the other notable contributors for the home team on a track which appeared a little more conducive for strokeplay.

Mahendra Singh Dhoni provided the sparks in the slog overs with a cameo 28 to leave the Australians an asking rate of five.

India for a change got off to a decent start as the openers Sehwag and Tendulkar did not play too many risky strokes in the initial stages of the innings.

Sehwag was the more belligerent of the two batsmen and singled out the fiery Brett Lee for special treatment clobbering him for two consecutive boundaries in his third over.

Lee was plundered for as many as 27 runs in his first three overs forcing Ponting to introduce the left-handed Nathan Bracken into the attack.

Glenn McGrath, who opened the bowling after being brought on first change in the earlier match, was highly economical at the end relying on his trademark line and length stuff.

McGrath provided the breakthrough by claiming the prized scalp of Tendulkar (10) with a controlled outgoing delivery. The star batsman got a nick and Gilchrist latched on to a smart catch to complete his 400th one-day dismissal.

After persisting with Irfan Pathan at the number three slot for a number of matches, the Indian team management did not take any chance in this crucial game and sent in Dinesh Mongia in that position.

The left handed Mongia, playing his first match in the high-profile tournament, made his intentions clear pulling McGrath to the fence to open his account in style.

The run rate dropped slightly as both Aussie pacemen Bracken and Mitchell Johnson bowled tidy spells in the third power play but Sehwag went into the assault mode by spanking Johnson for two consecutive boundaries.

The second wicket pair added 43 runs before Watson got rid of Mongia who edged an outside the off stump delivery to Martyn in the slips. His knock of 18 came off 30 balls and contained three hits to the fence.

Dravid, appearing in his 300th one-day international, immediately got into the act by hammering two boundaries off Lee who seemed to struggle for rhythm on a bouncy track.

The home team suffered a big jolt in the 29th over when Sehwag's innings came to an end, trapped in front of the wicket with Johnson accounting for the important scalp.